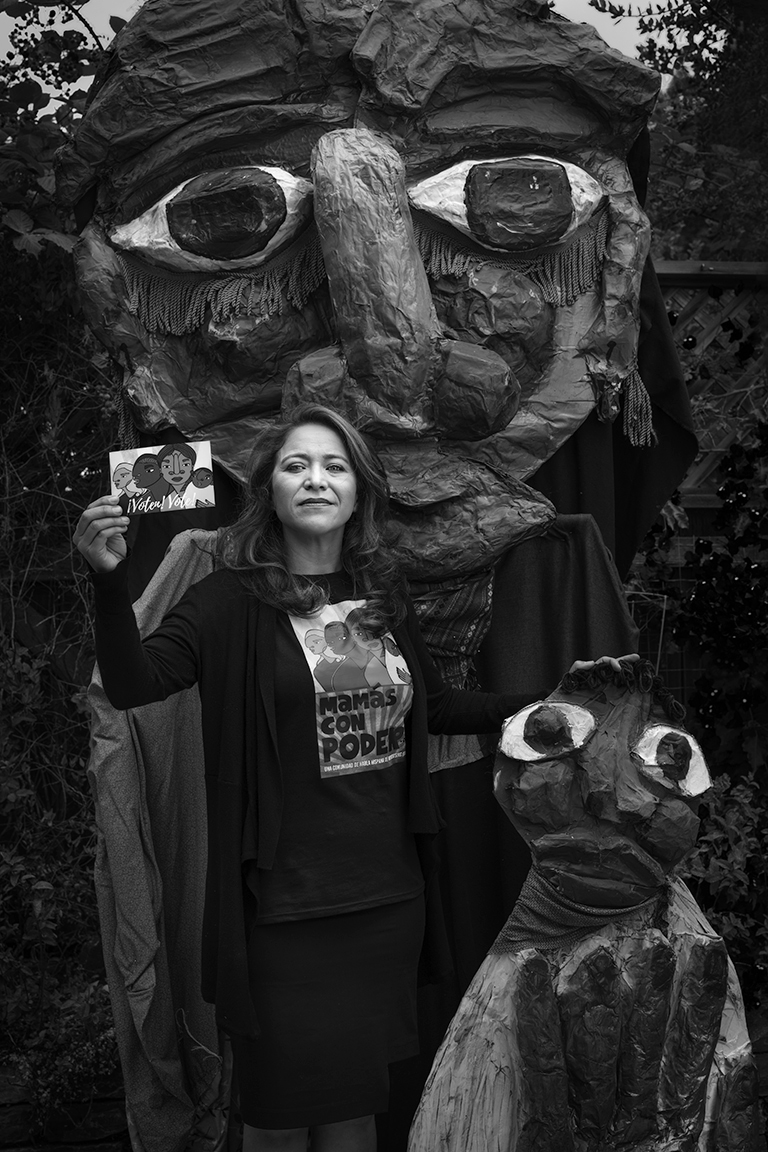 My name is Xochitl Oseguera.

I came to the United States to go to graduate school. I went to UW Madison for a graduate degree in economics and public administration. I came with a student visa then after I graduated, I got an H-1B visa. I studied for two years, and then I moved to the Bay Area. When I got my job in the Silicon Valley at a high-tech company, I was able to stay with my green card. This was before 9/11 when this country was more welcoming of immigrants with skills and without skills. Five years later, I got my citizenship.

I had many different jobs. My first job was with Global Exchange in San Francisco. I did a tour with an indigenous activist from the State of Guerrero who was sharing her story around the country in different universities and different community based organizations. We shared the story of the campesinos, the farmers, who were saving the trees in the Sierra in the Guerrero Mountains and how the Talamantes, the business, started killing the farmers because they were opposing to this cutting of the trees.

After I had my second child, volunteered for about three years with a small organization called MomsRising, doing translations, edits, and social media work. MomsRising is a national nonprofit organization of over a million members working on increasing economic family security and protecting women’s and worker’s rights. We are in all 50 states, working at the local, state and federal level, bringing stories of our communities to policy makers so they understand the needs of our community.

In 2014, MamásConPoder was created based on after many of our members were asking to have resources in their language. I work there part time with a good friend. We started working with different partners who are helping Latinas and giving them the resources from the policy makers and translating policy so they could understand what decisions were being made for their communities. We want community based policy decisions, not just decisions from one group of people or another. We want Latinos to sit at the table when decisions are being made at local, state, and national levels.

When the 2014 crisis at the border of unaccompanied minors happened under the Obama administration, we didn’t see a clear strategy on how to reunite those children with their families. However, under the Obama administration, there was a family reunification case management program which allowed families to wait for their court hearing and their process outside a detention center. This program is an alternative to detention. This program is 99% effective. It makes sure that families are able to take care of their children and even work while waiting for their court hearing. And it works, families still show up to court.

In 2017, Jeff Sessions directed the Trump administration to cut that program. Instead, they decided that families were going to stay in detention centers. These families that are crossing the border, running to save their lives and the lives of their children, are essentially being subjected to torture. The human rights abuses these families experience amount to torture: ripping children away from parents, holding parents and children separately in cage like prisons, and making sure that children don’t know where their families are. We have seen abuses of pregnant women in detention centers as well, as they are denied access to nurses, let alone doctors. The administration has made clear their goal of abusing and detaining brown and black immigrants. They have made it clear that they want to get rid of all black and brown immigrants, but not white immigrants.

What activists and organizers are trying to do is to protect and give voices to these families fleeing incredible violence and corruption. The detention of families will never deter people from coming because their alternative is often death.  So, MomsRising brings the stories of families — particularly families of Latinas — to decision makers. We compile stories of families and share them with people on the Hill so they cannot be disconnected from the reality of life for immigrants.

Immigration enforcement is now highly militarized and corporate. There are companies make billions from our taxpayer money funding immigration abuses in these detention centers. We are going to make sure that the banks financing the expansion of these profit-driven prisons are held accountable.

It’s important that people understand that the separation of family in detention centers is not happening just at the border, it’s happening all over the country. The most vicious prisons are in places in Pennsylvania and Washington State, so the public does not know about them or have access to them. These prisons are being built in communities where there are no jobs, so the contracts are well received by local politicians. It also means that if you are a detained mother, you do not have access to a lawyer or your family because calls and communication in the detention centers are made to be prohibitively expensive. Every time a mother is looking for family member who has been detained, they might be in a different detention center.

We are not going to stand for the abuse of families. We are campaigning for better policies. Community based organizations were able to help pass SB 54, the sanctuary state law in California. We were recently able to create enough pressure to pass a law that won’t allow Immigration and Customs Enforcement work directly with sheriff and police departments across California. This means that if someone is detained and doesn’t have proof of residency, the police won’t call immigration immediately. Not all police departments comply with the state sanctuary laws, including Oakland police and LAPD, so we have been demanding for the protection of activists and families in danger against ICE. We are also working locally with Berks Detention Center one of the biggest detention centers in the nation where many people from the caravan were placed. We are going to shut down these center and push out politicians who allow these human rights abuses to occur in the name of immigration enforcement and profit.

There’s a lot of misinformation about immigration. Immigration has built this nation, it’s the backbone of every industry. Yet, we can see the hypocrisy and corruption of the government throughout history. When they need labor, they open the borders. When they don’t need immigrants anymore, they put them in jail. And real people are being locked up, our communities are being attacked, so that someone can make money. You cannot open a conversation with someone driven by hate, which is scary because there are people listening to propaganda and white supremacist narratives.

But there are also many people who are driven by compassion. We are working with many conservatives who have been so open to learn about this situation. I believe there is room for a conversation across parties. The way you can do that is by focusing on the stories of individual people and their families. Many conservatives have been changing their opinions about immigration, especially with the crisis at the border ripping children away from their mothers. There was bipartisan support for the DREAM Act that was killed by the Trump administration.

I don’t have the full solution to this problem. Immigrant communities have been fighting for many years. I just want to make sure that the voices of these families are heard, from San Joaquin Valley to Washington Valley where they’re picking up apples to plants in Ohio producing meat.