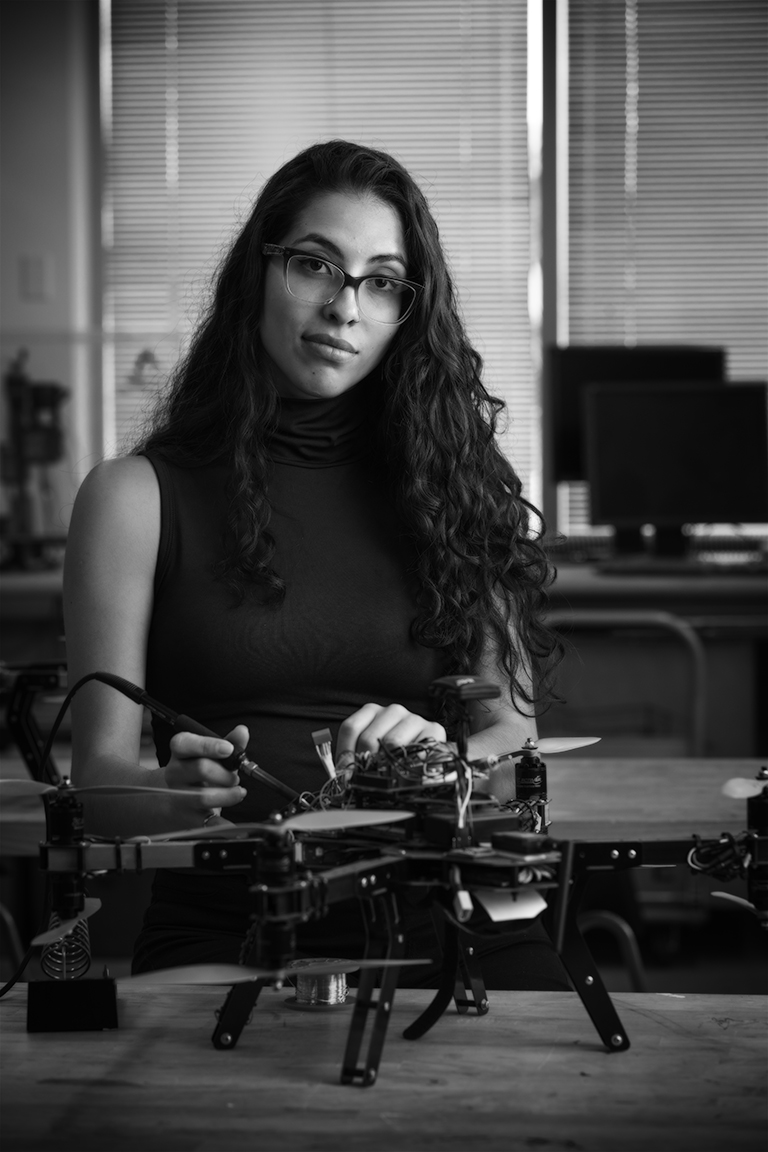 My name is Valeria Avila Guerrero.

I was born and raised in Jalisco, Mexico. When I turned 16 in 2011, there was a lot of violence in my city. My dad said that we received a couple of calls at home where people were threatening to take my sister, my brother, and I. There were kidnappings happening around our city. My dad also lost his job at the same time, so we decided to come here and reunite with my grandparents who came when I was a baby. In 2011, we decided to leave. We sold all of our things, gave the house away and everything. We just came with our dogs and one luggage each.

We had a tourist visa because we would visit my grandparents every couple of years. We came as tourists and after six months our visa expired, and then we became undocumented. That’s one way that many people become undocumented.

We came in December of my junior year in high school. It was a very rough transition because everybody was thinking about prom, sports, boyfriends, and those things. But I was struggling with English and understanding college and financial aid. When I was a senior in high school, a counselor really wanted to help me out because we found out that being undocumented meant that I wasn’t going to receive any financial aid. I had to pay out of pocket, and I had to pay as an international student because I didn’t qualify for the laws that exist like AB540 and the California DREAM Act.

I decided to go to a community college. I was at the school for three years in Contra Costa Community College in San Pablo, and the struggle there was to get my English to college level and pay for school. I had to pay $3,000 a semester versus $600 because I was considered an international student. I didn’t qualify for AB540. Applying to scholarships was like a second job during school. I think I applied to over 40 scholarships in the three years in community college. It took a lot of time away from my studying and my family.

When transfer applications came, I had a lot of support from professors to figure out a way to pay for school. When I got acceptance letters, professors were willing to pay for school for me, which was so nice. But thankfully, I found a private school, Santa Clara University that offered me a full ridescholarship. If it weren’t for that school, I probably wouldn’t have gone to college even though I had a 4.0 GPA. It was a challenge paying for school, being undocumented and not knowing the college system until I was a senior in high school. However, I was able to navigate the system and graduated as a mechanical engineer in 2018.

I’m still figuring out what I want to do with my degree, but I was thinking of studying robotics or spacecraft structures. So, I’m going to go do my master’s and study robotics.

My parents are very proud of me.  They’re a little confused why I’m still in school. They don’t know why I need more school, but they’re really happy. Being undocumented was rough on them in the beginning because my mom was studying to be a podiatrist in Mexico and my dad was an engineer. But being here, they don’t have the education they need to work with their professions. They started a couple businesses and they’ve been running them for seven years. They had to sell one to take care of their mental health. It was a lot of stress for them.

When DACA came out, I realized I wasn’t going to qualify for a work permit because I came in 2011. I was older, and none of my siblings qualified either. That was a little rough, but I had faith that if DACA happened then something will happen for me later. It hasn’t and it’s okay, we’ve dealt with it before.

But now they want to take DACA away, even though it’s shown that the young professionals that are using it are contributing. It’s very unsettling. It’s a little disturbing to think that it doesn’t matter how much we give back. Just because we were not born here, we are not allowed to be part of the society we grew up in — that’s disturbing.

It’s disheartening to hear about family separations happening at the border. It just makes me think about my family. If my brother was to get stopped when he’s driving or if my sister gets caught up in anything, we don’t have protection from deportation. It feels like this situation is really far away in the border with these kids, but it could happen with my family too.

My experience navigating better ways for me to go to school made me realize how disadvantaged I was because of the community I lived in, the high school I went to and the money situation we were in. That really put me into perspective how much a person’s socioeconomic status can determine whether they go to school or not.

My interest in STEM fields really made me want to push other women and other people that don’t have the access to do it as well. Because in my case, there wasn’t much push for me to go to college. And if I didn’t have that, it meant a lot of other girls didn’t have that exposure to go to science, technology, and engineering. My experience facing those challenges wants me to push others.

I would love to find a way to make opportunities accessible for all. If it weren’t for all the help I had, I wouldn’t have done it. And I guess I just hope we share more stories to have more empathy for others. If people don’t know my story they wouldn’t understand why I was in this country.

I really want to understand where people with anti-immigration views are coming from. I want to understand what their logic is, why is it that they don’t want people here. I would want them to put themselves in my shoes. What would they have done? Would they still believe the same things if they were in my shoes, if they were 16 and your family is in danger because people are trying to kidnap you and your siblings, will you not have done the same thing?

It’s not like my family chose to immigrate this way. We didn’t want to do this. We applied for citizenship years ago, but we’re stuck in the system. Our application hasn’t even been looked at. And the country offers all these promises — that you can pull yourselves up from the bootstraps, the American dream — but it’s not true. So, I will want them to put themselves in my shoes, and think about what would they have done.