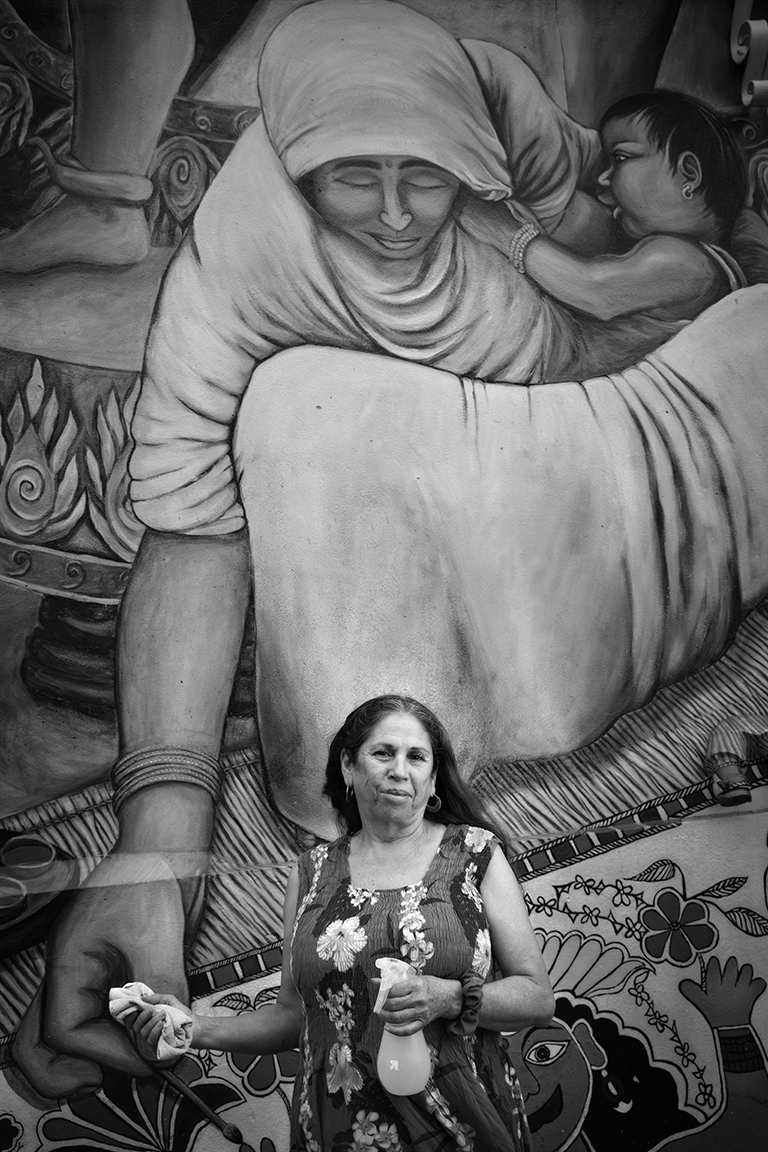 My name is Tersea. I am from Mexico and I am a domestic worker.

We came because we used to have a plot of land in Mexico, but at one point the government took it away and gave it to rich people and so we didn’t have a way to survive with our four kids.

There is a lot of danger coming here to the US. It’s a long trip, one walks a lot. You suffer from thirst, being tired, hunger, and even the coyote abuse women. Thank goodness that coyotes didn’t abuse me. I came with somebody who pretended he was my husband and so that gave me a level of protection.

I mostly clean houses. I know that people need clean homes and I can do the work and so I feel happy when I can leave those homes beautiful. When I arrive, usually, I arrive to a disaster and then I leave that home looking beautiful. Because people wait a long time to actually get their house cleaned. Sometimes they’ll wait a month or even longer to hire somebody to clean their home.

The conditions for domestic workers are really bad. Often, people think that you don’t know your rights and so they’ll take advantage. You’ll work fifteen hours and they’ll pay you for six. You work ten hours they pay you eight. So the conditions continue to be hard. We’ve been able to defend ourselves a little bit through the bill of rights that we won showing that we know our rights, that we deserve the right to overtime, but you still run the risk of not getting paid or being fired.

Domestic workers are open to all types of abuses. Abuse of getting yelled at, verbal abuse, sexual harassment like you’re so beautiful or you got a nice ass, up to sexual abuse. And you can’t leave your job. You have to sustain your house, your kids, and pay the rent.

I had a boss who I worked with doing janitorial services. I did everything with him like even wax floors, which is considered a man’s job.

He abused me all the time. Sometimes he would come in and he would yell at me. At one time he pushed me against the wall and he hurt my arm and he would say who’s going to believe you?

He would say like, “What are you going to do? Are you going to report me? You don’t have papers,” even though he never asked for my papers. He just made that assumption. I also didn’t say yes or no to that, but at that, what could I do in terms of reporting?

I have residency. When you’re a resident, you can go to Mexico but you can’t stay longer than six months. You have to come back or else you lose your residency.

I actually got my residence through the U visa process because I was beaten in the streets and I initially made the police report because I didn’t want it to happen to other people. That happened back in ’99 and it wasn’t until 2007 that I got my residence. I had no idea that doing a police report back then would serve me years later, but I learned that if you are a victim of an assault that you could actually apply for residence. And so later on, I heard that and I went back and I found my report, it was just a small piece of paper that documents a police report and I went to get this U visa, which gave me permission to work and at that time too, I was able to arrange for papers for my children afterwards.

I’m taking classes for citizenship and I’m also trying to save money because it’s expensive. And I’m taking English classes because the questions are in English.

We’re all living with a lot of fear. Even if I have residence, I fear they could even take away my residence since they are taking away so many rights.

All of us who came here came to work. We came to elevate this country. We came to contribute to this country. We didn’t come here to just be lazy and just have a ton of kids. I know a lot of people who have come who have had maybe one or two kids, they have a hard time and they’ve worked every day since they’ve been here. They’ve made deductions from their paychecks for taxes. They’re paying social security, they’re paying for Medicare, all of these things, but they’re never able to claim those benefits because they don’t have documents. That’s like thousands of people whose money just goes straight to the government without being able to reclaim it later. They have ITN numbers so they cannot claim any benefits, just pay taxes.