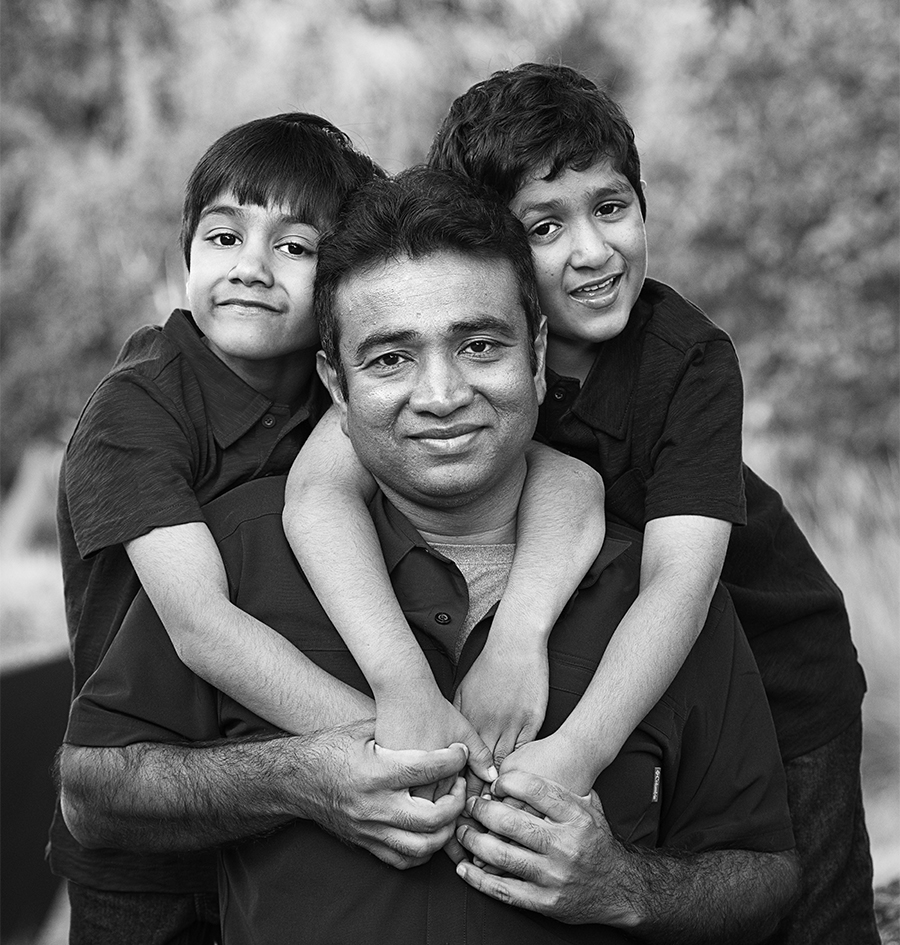 I’m Sandeep Giri. I am originally from Kolkata, India and I work at Google X. I came to the states because I wanted to study physics. The technical universities in India are based on what kind of ranking you get in entrance exams, and that gives you your major. I was getting different majors, but I wanted the physics major. I applied to various places in the US and then one of them gave me a good scholarship and I just followed that path. I’m the first in the family to get a high school degree. I have 43 cousins, both on mom and dad’s side, first to get a college or graduatedegree. But America helped make it happen. They could have rejected me at any point, but they allowed it.

I really didn’t know what to expect of the United States. It was a total culture shock. I came from Kolkata, which is a city of probably over 20 million people, to a small town — Cedar Rapids, Iowa. So there was a huge culture shock. But overall coming to the US meant I was able to study physics. My scholarship helped me out a lot. And the work I did through the college got me into internships, then graduate school, and then eventually to the job I have now.

I am a manufacturing engineering manager. I manage a team of people and we build hardware for Project Loon. Project Loon is essentially a balloon-powered Internet project. We fly stratospheric balloons. They go above 60,000 to 70,000 feet — so we are above clouds and airplanes — and we follow stratospheric winds. We can navigate the balloons to where we want to go using quite sophisticated algorithms. They provide Internet access where they go in a certain radius. Basically, the market we are chasing are people who are unconnected or under connected. We already have provided pilot service in Peru after the massive floods they had in 2016, which wiped out the infrastructure. And then in Puerto Rico, after Hurricane Maria, we provided service.

I would say in general — not just now, but in the past — it’s quite difficult to get to citizenship in the US. It’s a long, arduous path, which a lot of Americans don’t really know about. A lot of people wonder, why don’t all immigrants just follow the legal path? A good number of people do, but even through the legal path getting a student visa is not easy. I got the undergrad student visa, which is probably one of the hardest ones. It’s harder than getting a grad school visa. With a graduate study visa you can show that you get a fellowship or a research assistantship.

Getting H1B work after you have finished as a student is very difficult. It’s pretty much a lottery system. It’s been lottery based for probably over ten years now. When more applicants come in, the visa is allotted so they have an open lottery. It’s a random number, and you either get selected or not.

Then, for the green card process, you have to work for a company that sponsors you. And if you happen to be in one of the countries that has a long line, you end up waiting many years. My brother has been waiting for a green card for seven years now, I believe. And once you have a green card, you have to stay in the country for 5 years before you can apply for citizenship. It is possible and a lot of people do it, but it is a very arduous path. You can, of course, get married to a citizen and that’s a slightly easier path. But a non-marriage route is extremely hard.

At Stanford, I know a bunch of my friends who got a PhD or a master’s degree but couldn’t get a H1B work visa and they just left and went back to their country— to China or India. I know a Ukrainian guy who was one of the brightest mathematicians at Stanford. He won awards and stuff. He couldn’t get an H1B and had to leave.

I think we are losing a lot of highly skilled people. For example, by the time you finish your PhD in the US, Stanford has spent over a quarter million dollars on you, probably more, in getting you educated. And then you leave and then you take all that knowledge with you. It’s a loss to the country. That is why a lot of people come illegally. The legal path is so, so hard. There is no such thing as a blue-collar visa as far as I know. There’s only a skilled visa.

The federal government has made it harder to obtain a H1B visa. People are rejected left and right, over very small things too. They are changing the rules again to make it harder to apply and harder to get the visas. Additionally, they are making it quite hard to go from H1B to getting a green card. I just read an article the other day that there is a whole start-up industry starting in various parts of India where people who whose H1B visas were rejected by the US, returned back. There’s a huge start-up culture in Mumbai, Bangalore, New Delhi that’s happening because of these immigration policy changes.

The former administration was not shy about showing prejudice. It was clear in their language, in the things they wrote. The former president has called immigrants rapists; he’s called them criminals and animals. If you demean immigrants and underprivileged people like that, suddenly the rest of the country sort of follows suit and thinks like it’s okay. People think it’s okay to mistreat immigrants and refugees.

I think a lot of that is myopia and not recognizing how much the engine of the US economy relies on immigration. Look at the food industry. The reason I can go buy a box of strawberries for $2.50 is because somebody was willing to work for really low wages and extremely tough conditions. That entire industry is highly dependent on that. I think the environment towards immigrants is toxic. There is no other way to describe it.

The fears I have is that someone will look at me or my children, my face and skin color, and say, “Hey, you are not American. You’re not welcome.” Even though I am a citizen. There have been Indians who’ve been shot at. There was a guy shot and killed in Kansas. I got kicked out of a bar in Nevada. Nevada has open carry laws and these guys had guns on their side, and I just left. That’s not a situation I wanted to get heated up.

My kids look Indian, my wife and I are both Indian. I can only imagine in certain parts of the US, maybe even in California, they are assumed to not be citizens just by the way they look. Memorial Day weekend we went down to Pismo Beach. I saw a rally of truckers with confederate flags on the beach and guns. My kids were playing at the beach. Just by the body language of those people looking at us, it was quite clear we were not welcome there. This is California. This is supposed to be the bastion of immigration and liberalism. Confederate flags? I didn’t even see that in Tennessee when I was living there. And they had an American flag that was black in color. I don’t know what that means, but it doesn’t mean anything good

The FBI is reporting hate-based crimes increasing in every state in the United States, and ever increasing against the immigrants. It’s not just immigrants, it’s also happening against citizens of minority groups. So, it is not just me.

I think people need to realize that immigration makes this country better and stronger. It improves the economy, it improves tolerance. The US is a model for how a group of people from such different backgrounds can come together through common shared values. Any immigrant who has kids here realize their kids over time become partially Americanized, and then they pick up American values and you melt in the pot. And it works.

US has been so good at assimilating immigrants. People talk about Muslims having trouble assimilating in Europe. But the US has one of the best records of assimilated Muslim immigrants. I have been to Dearborn, Michigan and Toledo, places that they have very high Islamic population. The people there are very American and they love America. I would say that’s true for a lot of immigrants too. You talk to DACA people, and they say they love America. They want this to work. They want to be here.

I really do not want that fabric of American society to turn into tribalism. Tribalism is one of the toxic forces globally right now, but it really has hit America hard. The last election cycle was very much based on tribalism. It was quite clear on the rhetoric during the election cycle. It was a victory for tribalism and I think that’s going backwards, not going forward.

I must say that even though while I say that the environment has become toxic, I’m really grateful for what America has given me. This little college in Iowa had never seen my face, I was halfway around the world, but gave me scholarship that allowed me to come here. Stanford gave me a fellowship. My entire PhD was free. I am very thankful. While I’m concerned, the reason I might sound critical becauseI want this country and this whole immigration system to work. I actually care. It has worked for me and I want it to work for other immigrants.