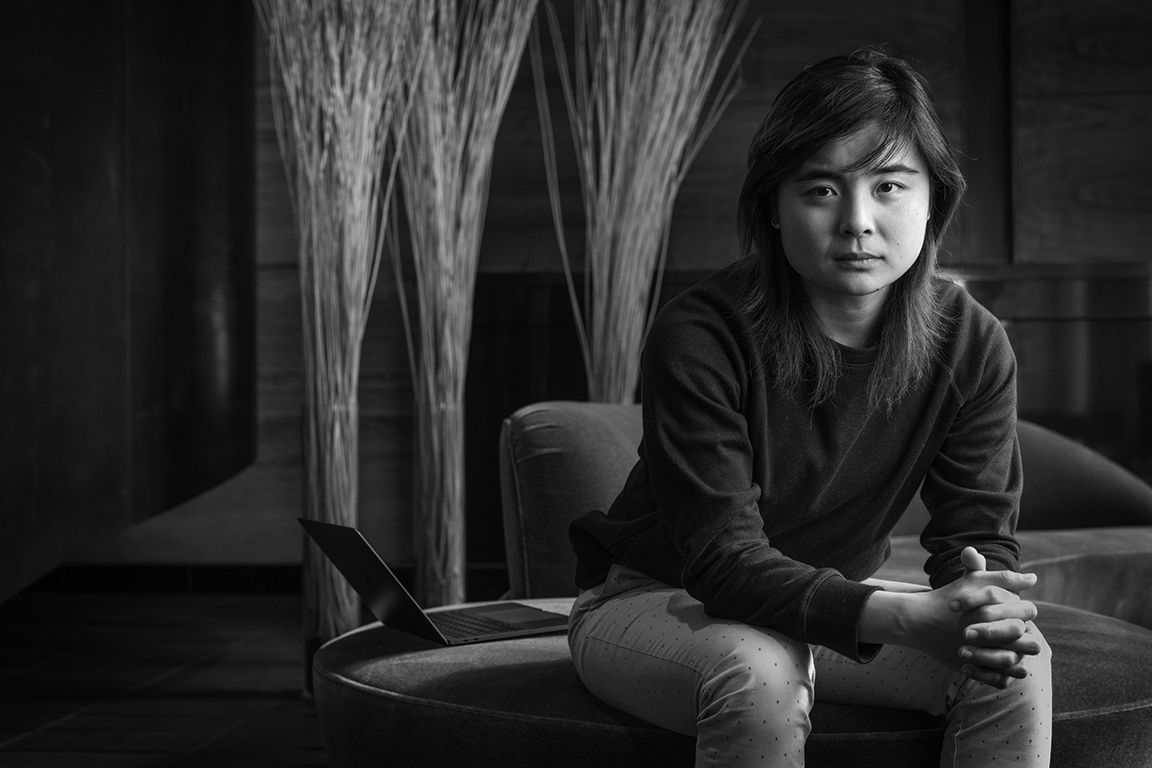 My name is Roxanne Guo. I was born in China, immigrated to Canada, and came to the States four years ago to start working at Apple. I recently left Apple to start my own company in San Francisco.

I am an only child. I was born during the one child policy in China. I was nine when I immigrated to Toronto, Canada with my family. This is a very fortunate age, I would say. It’s incredible how fast kids learn a new language. I think I picked it up in probably three to six months.

I am an immigrant. I’m also gay. When I get any anti LGBT slurs, I try to not take it personally. In a sense that I see it as okay, this person’s upbringing and educational background and their intake of certain types of media has formed a certain type of opinion that is contrary and a little hurtful to what I believe and how I grew up and how I identify myself. But that doesn’t technically mean they’re wrong and it doesn’t mean that I have the right to tell them that they’re wrong.

With that said, though, I will say – the Bay Area has been very kind. I grew up in very liberal, open, accepting spaces, Toronto and San Francisco. But it would really hurt me if someone was very anti-immigrant because my parents were immigrants and I saw them go through all the hard work that they went through. It actually makes me very emotional to think back to the early days when my parents arrived in Canada. They were relatively well off in China. But once you convert Chinese currency  to Canadian dollars they did not have much. My dad spoke some broken English and my mom didn’t speak any English. I remember living in a basement for a year, first floor for a year, second floor for a year, and then finally, on the fourth year, we were able to buy a house and then first car and then second car and then second house.

It was also very inspirational to just see them build everything from the bottom up. My mom learned English, went to ESL, re-did her degree in English, earned a teaching degree. Now she’s a mechanical designer. She just left Honeywell to also go to a startup. She teaches part time. My dad has his own side business. For them leaving China to come to Canada was all for me so I could have a better start and have a better life, which is a huge blessing and I outrageously appreciate that.

My parents tell me to take care of myself. I send them photos of myself on a semi-regular basis, because we don’t really have time to video call anymore, just to give them a visual comfort that I am doing fine.

My company is in the cancer care space. We connect cancer patients with oncology trials. Our goal is to bring cancer research to small community oncologists who now have great difficulty learning about the latest clinical trials for patients. There is currently poor communication between comprehensive cancer centers and community centers about which trials are being done in the country, and where.

Next week my co-founder and I are driving to Houston, stopping at community clinics along the way to demonstrate our treatment-matching product. The demo is super cool. I’m very psyched.

We will stop at two or three clinics along the way. We will skip the comprehensive centers this time. I am very open to partnering with any clinic, but for now it would be difficult to get in to talk to the right people. We will focus on pediatric clinics or Veterans Affairs, even, some of the clinics with more niche problems that we can very directly help solve.

There is a public database called clinicaltrials.gov where each institution and pharmaceutical company is legally obliged to list their trials. Each Medical Center has its own clinical trial page as well. There are also research papers that get released, also magazines and conferences. An oncologist in a small community center has a lot of work to do to find relevant clinical trials. This is overwhelming for them.

We are putting clinical trial information into an intelligent database. It’s living and breathing. The treatment-matching software is built on top of it. In the beginning, updating this will be manual, but we will eventually use AI techniques to do automatic updating.

I am in the US on a visitor visa right now. This is technically legal because I’m not getting paid. I was on TN status while working at Apple. This is something that Canadians and Mexicans can get at the border. It is a stamp of approval for you to work in the States under an employer that has been approved. Your profession needs to be on a list that the government accepts. That’s what I was on for all my previous American internships and for my full time at Apple.

Since leaving Apple, I am on a visitor visa and once the company incorporates, we’ll work with lawyers to figure out how we can sponsor ourselves on TN. The alternative would be an O-1 visa, which takes much longer. H-1B is a lottery every year and I tried four years now and I’ve yet to get it. But even on H-1B, I believe we still need sponsorship from a company. Those are my choices.  It is not going to be easy for me to stay here.

I want to create my company here rather than in Canada because of the market opportunity here. There are many more small companies here. Almost all the trials in the world are run in America. There are many more oncologists, many more clinical researchers, and many more engineers. My professional network is here. I’m all about taking risk, but there’s intelligent risk and there’s worthwhile risk and going back to Canada doesn’t quite make sense right now.

I find the atmosphere here for being an entrepreneur to be highly supportive. I’m not very sure about all of America, but definitely in San Francisco and the Bay Area. It’s already very stressful and you feel like you’re battling upstream the whole time so such support is crucial.

At the end of day, starting a company is all about doing good for the world and for the economy. Many of the patients eligible for a clinical trial are in a community setting. Having to travel to a complete different city, go into a huge center with strangers just to get a treatment for their cancer or to even find out what is the right treatment for their cancer, is a severe burden on them. Why not bring the trial and the knowledge and the research to the community? That’s what we’re betting our chips on.