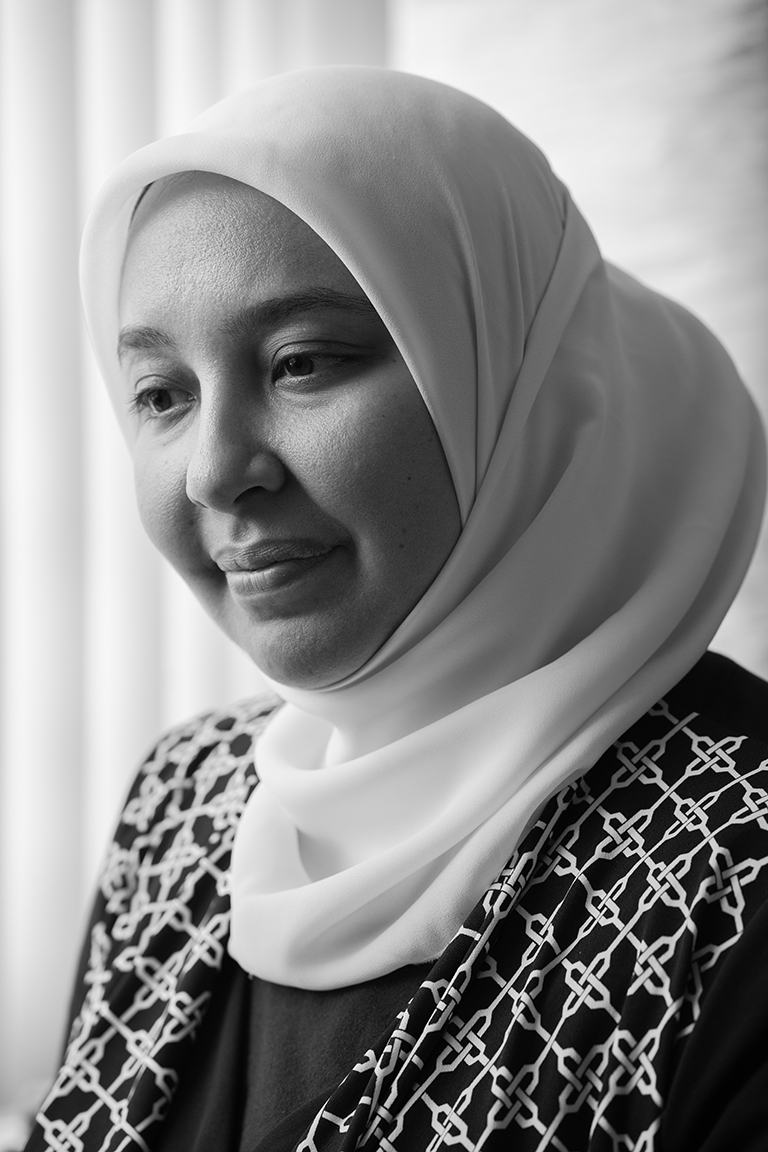 I’m Rania Awaad and I’m a psychiatrist here at Stanford where I am the Director of the Muslim Mental Health Lab and Wellness Program and a co-director of the Diversity Clinic.

The Diversity Clinic, specifically, provides counseling on issues related to culture, religion, immigration status and identity. The Muslim Mental Health and Wellness Lab is a research lab that works on mental health issues in the Muslim community; one of its 12 lines of research is on the topic of Islamophobia.

I also oversee the clinical branches of the Bay Area’s Khalil Center, a Muslim wellness clinic.

I was born in Cairo, Egypt. My mother was recruited by the United Nations in Manhattan, New York to work for them as a translator and my father was a physician and decided to re-do his medical training here in America. I’ve been here since I was three, so essentially raised here, just not born here.

The new immigration policies have very much affected the Muslim community. The real event I think — if we’re talking on the topic of Islamaphobia — that really kick started a lot of discussion within the Muslim community and for my field of mental health, specifically, was the Chapel Hill shootings in North Carolina of three young students that were unfortunately, murdered because of their Muslim faith.

I think what happened in the Muslim community is there was a sense of shock, but also the sense of like wow, we’ve come to this country, we’ve really brought the best we possibly could in terms of citizenship. The parents of three young Muslims who were murdered were immigrants, their children had done well educationally, they had really been good citizens in that they had tried really hard to help, had done all this great community service work, yet they were targeted for their faith. When I think of my own parents and their friends and that generation that immigrated here, they felt like wow, we could have done all this and raised our kids the best we could yet they would still be targeted and in this case, murdered in such a brutal way.

Right after that, came the election season and there was this whole talk about a Muslim registry and of course, the wall. The levels of anxiety, as a clinician I can sense this – a very palpable sense of anxiety within the community rising and rising over time. And then came the actual election and that day, I can’t even describe to you personally. I had been on a maternity leave for about three months right before that. The day I was meant to come back was November 11. And I just came back to just this outcry within the community and immediately was working overtime. We had all these town hall meetings where hundreds of people were showing up all panicked like, “What does this mean for us and our community?”

That was November and inauguration was in January and then February was the Travel Ban. So it was like several months in a row of chaos for our community and the feeling of being unwanted, unwelcomed. Then of course, the palpable fear of who’s next, what’s coming next? Even members of countries who weren’t affected by the Ban were asking questions. People would say things like, “My mother is ill and I was going to bring her from Malaysia. Is Malaysia next?” Nobody really knew what was coming next. So there was fear too. Even people who weren’t directly affected were still affected.

I still see right now in my own clinic here- people just walked in today saying I’m still visibly anxious and shaken by the travel ban and I can’t quite get back to normal again.

I direct the Bay Area Muslim Mental Health Professionals group. Because it’s a faith-based population, a lot of times this is where people fall back on faith and kind of look to a greater power and say there’s some greater power over who’s currently in power right now. That usually is helpful, too, to kind of reframe and restructure. That doesn’t work for everybody of course, but for those that it does work for, it’s a very important factor in their wellbeing, it’s really useful.

If I had to explain why the Travel Ban is so detrimental, I would refer to an academic piece I authored in the American Journal of Psychiatry. It’s actually about one of our Stanford students here. I can share this is because she herself actually went public with her story and has been interviewed on many channels.

She was a student from Sudan who was brought over on a scholarship to attend high school in the states because she was academically doing well. From there, she ended up getting a full-ride scholarship into Harvard. From Harvard, she goes into the non-profit sector because she wants to give back and she worked quite a bit with students who were underprivileged and went into the field of education. Then from there, becomes a doctoral candidate at Stanford – where she is right now –in anthropology and she focuses on the migrant workers in The Sudan. She’s halfway through her degree doing the field work that she needs to do in Sudan for her degree when the migrant workers themselves said to her, “I think your president is doing something really weird and you better go check the news.” She runs from the fields to the very first TV she could find in someone’s house and turns on the news to find the announcement of the Travel Ban. She calls Stanford and says, “What am I meant to do?” They wire her some emergency funds over to Sudan to get on the very next plane out. She gets on this plane, but she misses a connecting flight and unfortunately, gets into JFK  20 minutes after the ban is signed into effect. And she’s a green card holder, but the first iteration ban also had green card holders in it.

She was there in this holding pen, basically, and describes being there with Iraqis, Iranians and Syrians. She keeps telling them, “But I’m a green card holder, but I’m a Stanford student,” but they don’t care. She asked for legal representation and was denied that so she doesn’t even have access to speak to a lawyer in this point in time. Things unfortunately got so much worse that she ended up getting handcuffed and searched in a very intrusive manner. At that point, she says, “It doesn’t matter all the grit and strength I have,” at this point she just breaks down crying. She was stuck there for hours before Stanford was able to get her some legal representation to get her out.

She says it like this, she says, “Look, I’m the prototypical story of an immigrant who comes to this country in hopes of the American dream, pulling yourself up by your own bootstraps. I was a young girl, with my own academic success I was able to succeed and I’m here to help people and do the best I can this non-profit sector, but I am the four things that this presidential administration doesn’t want; I am black, I am Muslim, I am an immigrant and I am a woman. That’s exactly what this president doesn’t want and here I am treated in this way.” Unfortunately in her case she had a history of PTSD from a previous incident and this incident in the airport absolutely triggered the entire trauma that she had previously had before. When I ask her things like why not get help and she says, “I try, but the cultural divide and understanding is so wide that it’s hard for me to really seek out the help I need to seek to get better.” As a clinician, this story puts it all in perspective for me.

Basically you can have people who come to the land of opportunity, who pull themselves up by their own bootstraps, but despite that, because of the very discriminatory type of behavior– they’re prevented from doing good work and giving back as much as possible.