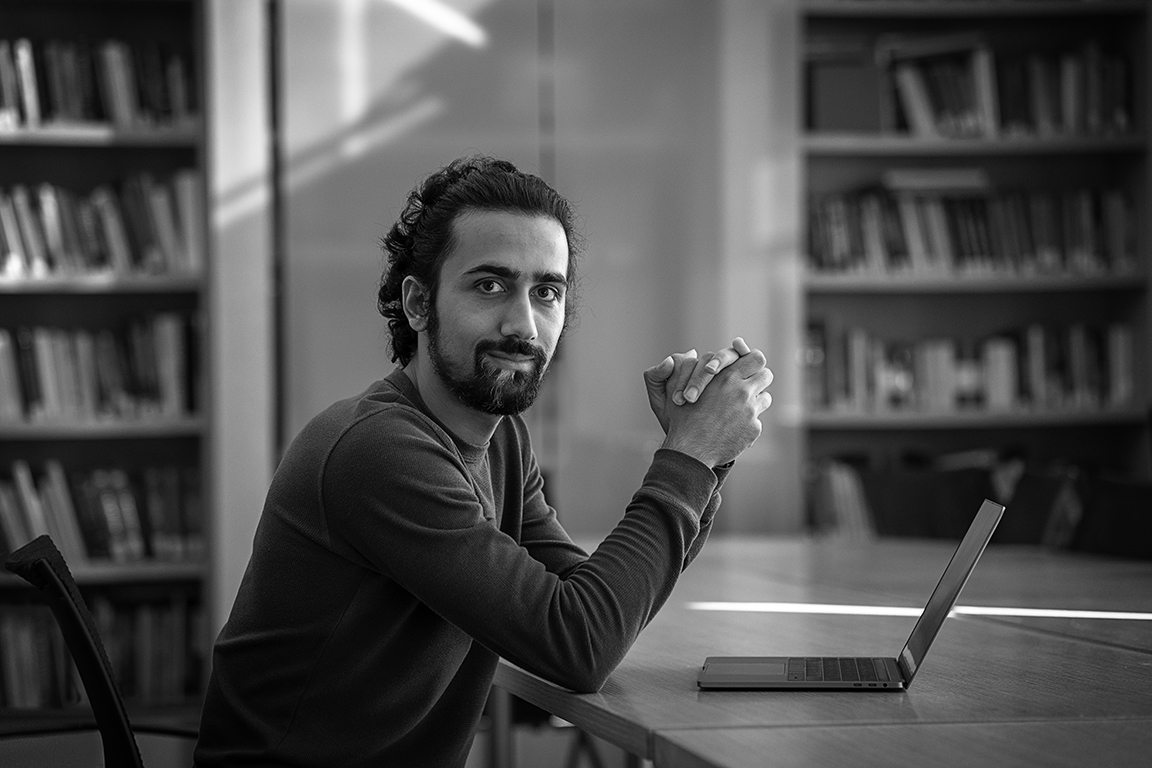 My name is Ramtin. I was born and raised in Iran. I came to the States in September 2015, directly to Stanford on a student visa.

I’m working towards a degree in reinforcement learning. Basically, you have a robot and this robot is going to do something — but you don’t want to explicitly tell the robot the exact rules what to follow. What you do is assign a reward signal. For example, the robot wants to wash the dishes: if you receive a clean dish you assign a reward plus one and if the robot breaks the dish down you give a reward minus one. After a while, the robot learns how to do this task. So, this is basically what I do.

With the visa, you can leave anytime you want but you may not be able to come back. Even if you are allowed to come back, the problem is it might take three or four months for a visa process. And as a graduate student, you cannot leave the school for three or four months for no reason. So, we just don’t go back because it’s a risk. And as you invest more in your school over three years, then you also lose more if you’re stuck there and you can’t come back to U.S.

It’s hard, but the good thing is that everyone here understands, like the society that we are in, me and my friends and stuff, and we kind of know that we don’t have family here but our friends are our families. So people are helping each other.

I decided to come because Iran is not a great match for me; I’m not a fit for that society. I’m not a religious person and living there was just hard. You don’t have the freedom that you want. In addition, most importantly, most of the top 20 colleges across the world are the schools in the United States. And I also get a chance to live in the United States for at least five years until my program ends and get a good education.  I also applied to schools in the United Kingdom, France, and Switzerland as well but decided based on rankings to come to Stanford.

I had to adjust to a lot when I came here.  People also behave differently; they expect different things from you. If you go to Iran, people usually, for example, show their emotion much easier than the people here. Here, you usually talk to a person and the person might even hate talking to you, but he just doesn’t show that to you so you won’t understand. But this is not the case in like Eastern countries. People will just show much easier that they feel that way.

So, there are many of these cultural things that take time to adjust to, but after you observe more of them you can explore more of the culture as well. So you can just see what other people are doing, why they’re doing this, does that makes sense, doesn’t make sense. I think actually, the differences between cultures is kind of helpful for your personality because you have the opportunity to actually question what you were doing and what other people are doing, and then figure out what is the best thing to do.

At the time that Trump was elected and then travel ban came in, we had the PSA, Persian Students Association, and here at Stanford. I was a board member of that at that time. The Iranians on campus they thought that we, PSA, could do something for them. We were receiving many emails asking, what should we do?  I feel alone right now. I came here from home and now this country is kicking me out. A lot of these kinds of emotions. Reading these emails from other people means you also to receive the emotions of other people as well as the ones that you already have. But it was the moment that brought us more together. At that point, we just realized that we couldn’t do anything, but gather together to just drink tea and be together.

It was one of the first times that we all felt lonely. We were away from home and we felt that the US was kicking us out. At the same time I felt very connected to my friends. Now I’ve just kind of accepted the fact that I can’t see my family, and that after my graduation it’s not clear what’s going to happen to me.

After the travel ban, this unity increased because people just felt that they needed each other. I guess after the travel ban it just sunk in that we are living somewhere and that stability is not guaranteed, we know that we need community. And the community that we take for granted can disappear at once, and the only thing we have to fall back on is just our roots.

I wish that there weren’t people with such hostility towards immigrants or Iranians. There are some people that just have hostility because they’ve just heard something since they were kids and don’t have any reason to back this up and they just continue this behavior, I really can’t talk to them. As long as you don’t accept reason and science as something that you can follow logically, then I can’t do anything. But if a person is a person that accepts reason and also logic then we can just talk like why do you hate these people?

I get someone hating the government of Iran. I’m not a fan of them, so I’m very understanding. That’s just obvious. But why do you hate the people? People who did not have the choice in being born there are somehow sitting in front of you now and you just hate them for where they were born.

The travel ban was also interesting for me because when we went to the San Francisco International Airport, we saw people protesting there. Something that was completely shocking is that a lot of the people there were Jewish people, chanting against the Muslim ban and protecting us. That was a moment that has had a lasting effect on me. That no matter who you are, if something morally doesn’t make sense then you should fight against it.

I’m very optimistic for America, honestly. I really appreciate the freedom you have here. The First Amendment by nature is very radical; it’s amazing to have. It’s mainly because of that that I’m very optimistic about the future of the United States. We don’t know what’s going to happen, and there is no system that is perfect. This is not perfect either. Sometimes, unexpected things will happen. But we can figure out what the problems are, and what can be solved for the future.