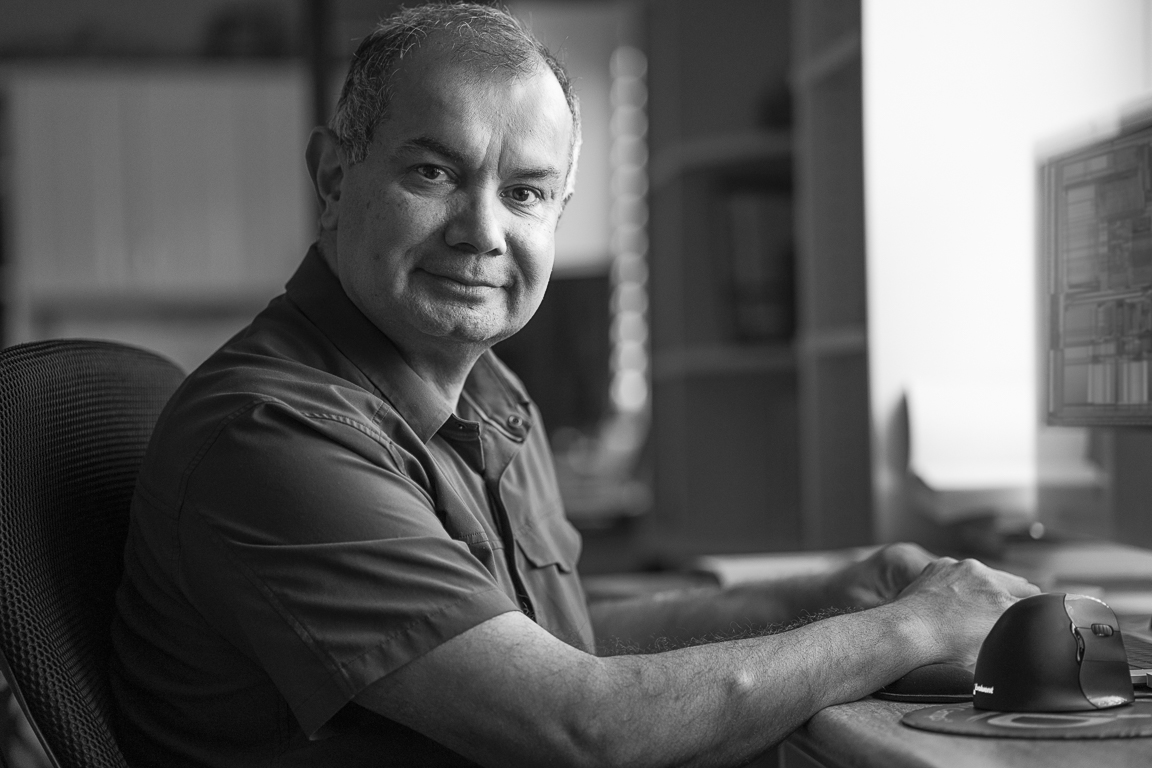 My name is Ram Sunder. I did my undergraduate engineering degree in India, and then I got admitted to the University of California Santa Barbara. In March 1985, I flew to Los Angeles and then to Santa Barbara to join the university. I finished my master’s in one year and then went to the Midwest to work in Delco Electronics, General Motors on chip designs for automotive electronics. That started my career in the United States.

When I left India, my father had a business and I had only planned to spend a couple of years in the U.S., a country I had heard so much about, and then return to take over his company. To come here, I had to prove that I was only coming for my studies, and not to immigrate. But you know, this country has a way of growing on you. Before you know it, you love being here.

At that time, it wasn’t as difficult to get a visa to work here. My future wife and I went through all the paperwork in 1986, and we only got our right to work in the U.S. in August of 1988. It was almost two and a half years of paperwork. We then took our time to get citizenship because we thought we might go back or felt wrong about giving up the Indian citizenship. That changed when we had our kids because we realized we are more American than Indian. In around 2000, we became citizens.

It was easier because there weren’t too many of us and there were hardly any immigrants — especially in the Midwest. In the town of Kokomo, Indiana where I lived, there were maybe four of us. It was like living in a goldfish bowl. Everybody knew who you were, what you were doing. We stood out. There were two of us from India who stood out because of our skin color. Then, there was a guy from Holland who also felt like a total immigrant because it was a small town and unless you were born there, you were not part of the group. Finally, there was another guy from Argentina who, even though he looked white, really stood out because of his accent. You couldn’t go anywhere without people noticing you.

I got married and soon realized the opportunities in that town for my wife was very limited. So, we decided to come to the West Coast where all the progress on computers was happening. Moving to California was totally unique experience for me after three years in this little town in the Midwest. I was suddenly surrounded by people from all nationalities: my manager was an Israeli, his boss was from India, his boss was from China, and so on. Suddenly we were hearing all these languages at work and experiencing all kinds of cuisines. It was just mind-blowing.

I am in semiconductor design. I work at Intel Corporation, primarily on microprocessors. I fell in love with semiconductor design when I did my master’s and that has been my passion at work for the last 32 years now. I’m primarily focused on how to design new computer chips and how to make it easier to design them. But along the way, I have had to design some chips to show that my ideas are good. I have been pretty single-minded in that.

I personally feel the immigration policies are very shortsighted. Just from a business sense, it is so easy to do the work I do anywhere in the world. You just need qualified people. So, I see the impact of these short-sighted decisions in work being shipped out to places like India and Malaysia where you have highly talented people. Places like India, Ireland, and Malaysia didn’t even exist on the chip design industry map ten years ago. They were just doing some very low level activity. Now as the educated population has grown in India and these immigration policies have been implemented, more and more advanced designs are being set up in India.

So, rather than attracting the best people around the world to come here to work, what we are doing is shipping our best designs out to other countries. In the end, what’s happening in manufacturing is going to happen in chip design because we will find it easier to ship out the designs. The computer chips will be created in other countries. It’s very insidious because now our local managers start losing touch with what it takes to be competitive in design. So, suddenly it isn’t just that you can’t find engineers, you can’t find people who are familiar with how to drive the design. The whole creative process collapses because of this.

I personally think it is very, very short-sighted. We should be instead focusing on educating local talent because there are so many brilliant people here. It’s not a secret why people from all over the world want to come to universities here! And when you have all of that locally, why would you push the jobs out instead of coming up with policies to make it easier for Americans to go to college and be competitive in the job market here? Why would I want to go through the hell of an immigration application if I can find a smart kid locally? The immigration paperwork is just horrendous, even without any of the xenophobia that we are seeing now.

The first thing I love about this country is that it was made by very imperfect people and the constitution itself is very imperfect. But at the same time, the founders wrote it to declare that we are aspiring to a more perfect union. It resonates strongly with me because nobody creates perfect things. And this was created as an experiment, where we are all contributing to try to make this last a long time. And this is not an old country. After all, this experiment is only 250 years. There have been empires like the Roman Empire or the British Empire lasted much longer. So, it is a very young country still.

In high school, we had to learn about the U.S. constitution and  American history as so we were filled with a lot of idealism about what the United States is. Because many of its ideas like pursuit of happiness were adopted by other countries. When the Indian constitution was written in 1947, they studied the U.S. constitution. But even then, you still had a lot of feudalism in India. At that time when I was a young man, this country was something much more exciting than anything I saw in India.

A country is like an organization. So, you join a company or a country and ask what are your contributions? First, we bring ideas. These ideas have a way of creating wealth, employment, and progress for this country. I take pride in the fact I played a significant role in the development of the Intel Pentium Processor, which has really changed how we use computers. If you look at DVD players, which used to be popular, I had a significant role in its development. So, everyone contributes materially in some ways.

But we also have nonmaterial contributions. In any situation, people who have been around for a long time become jaded by what they see. The newcomers still marvel at what others take for granted and that brings an important energy. For instance, my wife is so energized by her political work. She doesn’t believe, like many in India or even here, that corruption and exploitation is inevitable. She says, “In this country it cannot happen. This is a country where we believe in what’s right.”

We take inspiration from our friends to see how they react to injustices. These are things that I believe the newcomers also contribute. The saddest part is if the newcomers come in with a feeling of alienation, then they won’t feel the drive to contribute. For instance, in Dubai, immigrants from all over the world have only one thought: how much money can I make and then get out of the place. They don’t wonder what they can do to make the U.A.E a better country. But the U.S., despite all the hardships, has welcomed people from all over the world and all religions. So, it has led to a very rich contribution to the evolution of the United States.

I think we are going through a very dark period right now. The notion of India or what it means to be Indian is very tenuous. You can see it easily splintered. In fact, many of the state lines are broken up based on languages and ancient kingdoms. That shouldn’t come to the U.S., but the divides are creeping in. In this fracturing, we seemed to have abandoned efforts to find common ground.

This danger seems to have come from the difficult economic times starting 2008, and even before that. And the scary part for me is the ideals of FDR and other people with great visions for the future of the U.S. have been slowly chipped away. Fear and division has become accepted as the norm. And therein lies the danger, because we are going back to 1890s instead of going forward to 2090. The opportunities are great, but you make bad decisions when you’re not looking forward and embracing the future.