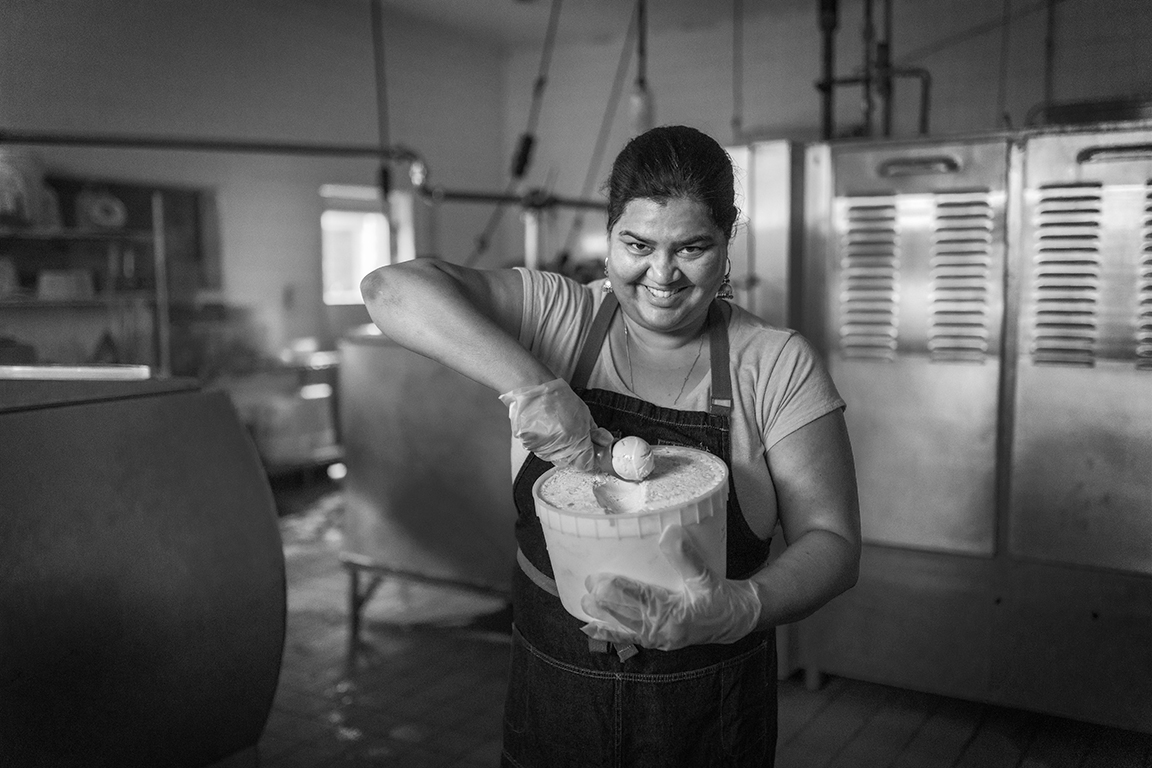 I grew up all over India. My dad had a job that took us all over India and my early memories of anything is related to food. I remember growing up on the foothills of the Himalayas where I would sit in my diapers and watch my mom make food and the smell was just divine.

Then I remember going to Bombay and being very young and trailing mom with my dad and going and having kulfi, which is made with nuts and milk and spices and boiled for a while slowly. It’s really creamy and wonderful. These are my memories of childhood.

However, my mom’s family was very conservative and wanted boys and wanted to give all the success to the boys in the family and they did not want my mom to study. Even though she was an A grade student, she could not pursue a career and she had to get married. And so my mom was very insistent when she had a girl that her girl had to be successful. She had to be independent. No cooking for her. No housework for her. She had to be like a boy, which was great, I must say. I really enjoyed not having to do all that at all.

As I grew up, I thought of America as a very just country. I read about Martin Luther King and I thought, “Wow! They talk about race here and all this progress has been made with race.”

I finished my undergrad in civil engineering and came here to do my master’s. The thing is I suddenly discovered alcohol. I was like a kid in a candy store. I saw bottles of vodka and whiskey and I was like, “Oh, okay…” So I partied a lot, which I shouldn’t have done. But one day, one weekend, all our friends we are partying and we had to finish an assignment and we came together and did it together. Our professor was mad at us. It wasn’t really the whole class, maybe 15-20 people.

He, for some reason, just had this conversation, reprimand, and let the kids from here go. I’m still not sure why, but the three immigrant kids in the class; one from Croatia, one from Turkey and me, we were threatened with suspension. It was not just suspension, we would lose our visa and we have to go back home. The stakes were very high for me because my parents had pledged their only home to send me to the United States, so going back was scary. I don’t know what would happen.

I think that incident kind of shuttered the myth of a fair America to me. It made me feel like I don’t understand this country, I don’t know what the rules are, I don’t know whether I belong. I stayed for a while like that. I was good at what I did. I hated engineering, but I was good at it, so I decided I’m going to put my head down, not ruffle any feathers, and just become an engineer. I did this for 15 years until my wife and I were walking and a bus in San Francisco hit us. That made me think really hard about what I want to do. Do I want to live my life like this? And where do I belong? Do I belong here, do I go back? And I decided I wanted to make food.

When I thought of food, I thought always of kulfi and ice cream and the joy of dessert. That’s where Koolfi Creamery, my ice cream company that I started with my wife. All the recipes come from my mother. I realized there are so many amazing ice cream companies around. What is it that I bring to the table, and will that make me feel like I belong here? What I could bring to the table was all these desserts I loved, the stories behind it, and combine that with amazing quality American ice cream with eggs and cream and old school ice cream. That’s what we do.

I’m happy report that we have developed a community in our home base of San Leandro, which is where we live. We have a friend circle through ice cream, and finally, I feel like I belong. I feel like I’m Indian and American through this food experience. I don’t know where this will go, where this will end, but the journey has been wonderful. And I encourage anybody who does not like engineering to drop it right now and become a chef.

To me, being an American means embracing and celebrating diversity in people, thoughts, ideas, and ideals.

I think it’s important that we reach across, include people that we don’t agree, and humanize the immigrant experience for them, We need their votes to win elections across this country and have kind leaders who represent our values of inclusiveness.