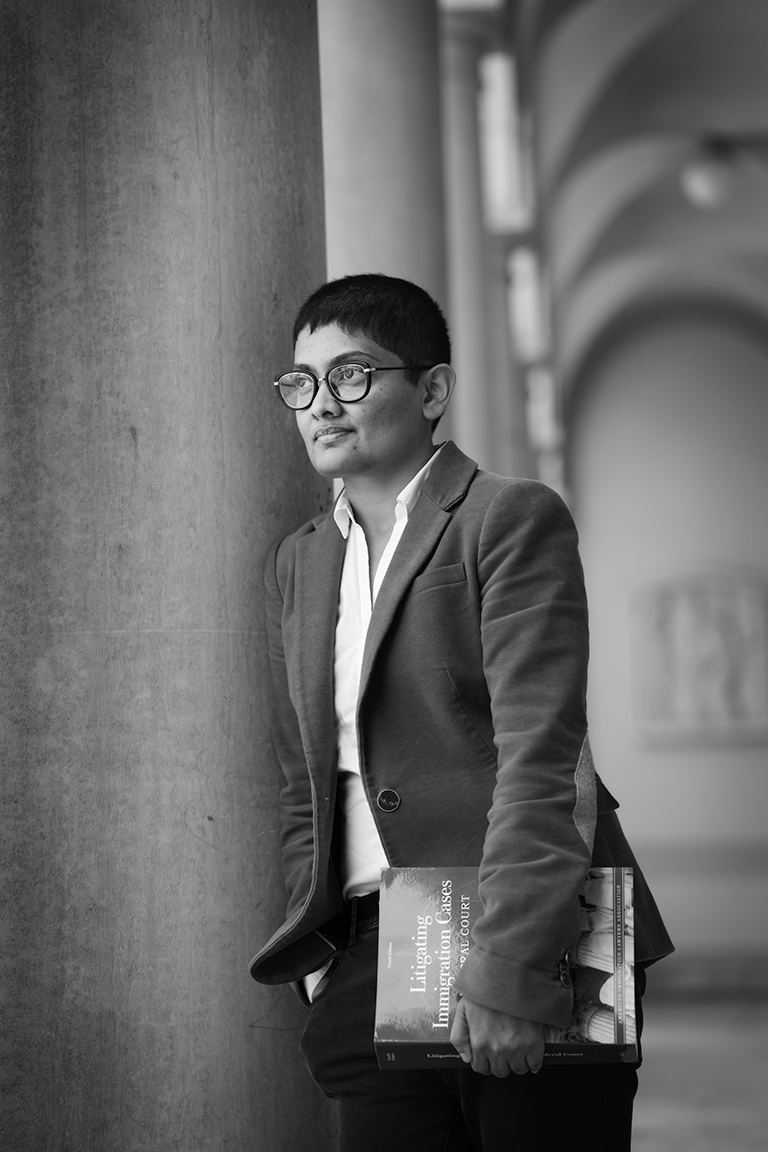 My name is Prerna Lal.  I’m from the islands of Fiji, originally. Between 1879 and 1920, Indians were brought to Fiji as indentured labor to work on sugar-cane plantations, and that’s how my family also ended up there.

My family fled Fiji in about ’99, right before the coup d’état that overthrew the government. It was a Labor Party government in Fiji that was led by a Prime Minister of Indian-origin, much like my family. We were lucky enough to have tourist visas to the U.S. before the coup d’état else we would have never escaped the ethnic conflict and violence that followed. I was around 14 at the time. I have an older sister who was already studying in the U.S. so we basically just came to join her. My parents were able to remain in legal status for quite some time because my father enrolled in school and he was able to just keep his visa.

Immigration advocates say there is no line, and immigration naysayers say to get in line, but in reality, it is far more complicated than that, as I have been in line only to be booted out. At first, I was enrolled in high school and through my father, I was able to keep my status up until college. I graduated high school and then I had to apply for my own student visa application, which was denied right after 9/11. My grandmother had already filed an immigration petition for my mother, which included me in the petition as a minor. You cannot have a student visa, which is a non-immigrant intent visa, while also having immigrant intent. You cannot study here as a student who has to prove they’ll go back home while also having a contrary petition from your relative that is sponsoring you for a more permanent stay in the country. It doesn’t quite work.

Basically, I became undocumented in that instant, because I was in line to get a green card. I got into schools, but I couldn’t enroll due to my lack of immigration status. I got immensely lucky because when my parents were enrolled in college, they asked around and found a college counselor who helped me go to a community college without requiring any kind of immigration paperwork from me. Then I transferred to a four-year university. By that point, no one really asked about my immigration status because of this law in the books in California AB 540, which allows people who are undocumented to get in-state tuition. People just assumed that I was an AB 540 student.

I often asked my parents what was happening with my grandmother’s green card petition for my mother because if it came through, we would all be able to get our papers. But it so happened because of the massive visa backlogs we have in this country that it took around ten years from when it was filed for my parents to get their green cards through this petition. And because I was over 21, which is the cut-off age for a child in immigration law, I couldn’t get my green card as well through my grandmother.

I got my bachelor’s at California State University and then went to get Masters at San Francisco State University as well. I was 22 when I graduated and then I had no way of doing anything. I didn’t have papers so I could not work, I didn’t have healthcare, I didn’t know how to drive and could not get a license. I was basically an adult without any of the rights and privileges that come with being one. I really wanted to leave the country, but because of the unlawful presence that started when I turned 18, I would be prevented from coming back for a whole decade. Faced with no other option but staying here with my family (all of whom had papers by this point), I started organizing with other undocumented students. I found some people online on DREAM Act Portal and created this organization called DreamActivist. It became the largest portal for activist undocumented students in the country.

And that’s how I started organizing for the DREAM Act. I met other undocumented students and trained dozens of people in using social media to mobilize against deportations. I also went to Washington D.C., and had so many meetings with congressional leaders to pass legislation, which would allow people like me to get some sort of legal status. I also then applied to and went to law school because my lack of status and being placed outside the law made me curious about the law, and about fixing it. I was still undocumented so I didn’t even know if I would get in. I actually did get into many schools, received  merit based private scholarships and eventually ended up matriculating at The George Washington University Law School.

My first year of law school I got put in removal proceedings because while my parent’s had their green cards approved, mine was denied due to my age. I was 24 at the time. So I would be in school in D.C. and I would fly back for my court hearings in S.F. and then fly back to D.C. to go to school. This saga continued up until I graduated in May 2013. I had my law school degree. I even obtained my law license. Thankfully, the Supreme Court struck down the Defense of Marriage Act (DOMA) in June 2013. DOMA was a discriminatory act that allowed the federal government to discriminate against same-sex couples by denying us full federal benefits, including immigration and health care through our same-sex spouses. Because DOMA was struck down, I was able to marry my partner and get my green card in August 2014. And I finally became a U.S. citizen in April 2018, a full lifetime after coming to the United States.

The current administration’s policies are devastating for so many people because for one, a lot of my peers and friends who got DACA, still live in limbo to this day. Every day the administration rolls out a new evil plan against immigrants and people have to live their lives on borrowed time. And that’s really hard and anxiety producing on so many different levels. The situation at the border is pretty bad too; families being separated, children being separated from their mothers and fathers and being lost, kidnapped really in essence. Their message is stop coming here or we will kidnap your children from you.

Immigrants are and have always been a net benefit to the U.S. and there’s no doubt about it. That’s where we started from usually when we talked about the DREAM Act. More than that though, we’re more than our economic boon. We’re human beings and our rights should not stop simply because we crossed the border or the border crossed us (or because we aged, something we cannot control). I feel like anyone who takes a chance in coming to the U.S. and spending their whole life savings, as my parents did, as well as crossing and scaling big walls in order to make it here and undergo the most dangerous journey deserves to be here without a doubt. I think immigration is the biggest form of flattery and to see it as anything other than that means we are losing our best people while also treating people who are doing everything to come here in a really terrible way out of racism and xenophobia.

There’s always this conservative argument that we have a system and that people should get in line. I got in line and I got edged out of the line and I got put in proceedings and then I had a law that would discriminate against me. I did everything legally and I still had to endure 15 years before I was able to get a green card. So the system doesn’t really work for the majority of people, especially, with these huge backlogs that we have. So this whole getting in line argument doesn’t quite work.

I was doing calculations the other week for one of my Mexican clients who has their sons or daughters in Mexico and they are here. They are U.S. citizens now and they asked me like how long would take if they sponsored their son and daughter today? And because of backlog, it’s a 54 year wait to immigrate here legally. And if my clients just had a green card, it would be 104 years. It’s like you can’t actually get in line in this lifetime. You can, but you will die, basically. There are similar calculations for the countries that send the most immigrants: Mexico, Philippines, India and China.

I don’t know how we can change attitudes about immigration. I have done my fair share of lobbying and trying to change minds and change hearts and ultimately it didn’t matter, at least not for me. I have resigned myself to the fact that if I want something to happen, I have to make it happen. And that is why I work as an immigration attorney now, and own my own firm. I help other people attain the same thing that took me so long to get.

Even as a US citizen, I still get called “illegal” and receive hate mail and death threats to this day from anti-immigrant trolls across the country. To this day, I feel like an outsider even with a US passport because no one has ever sat down and welcomed me to the United States. I have seen attitudes change for things like same sex marriage over my lifetime, over the course of a few years. I think what happened there were a lot of people started to come out and talk about themselves and their stories. And leaders in power, such as Obama, started talking about how they had evolved on the issue, which allowed space for other people to evolve on the issue too and to come out and say actually this seems like the right thing to do. Hopefully, someday soon, we can have a similar paradigm shift that also helps some people evolve on this issue of immigration and we stop treating immigrants like we are a burden or that we don’t belong here simply because we were born somewhere else.