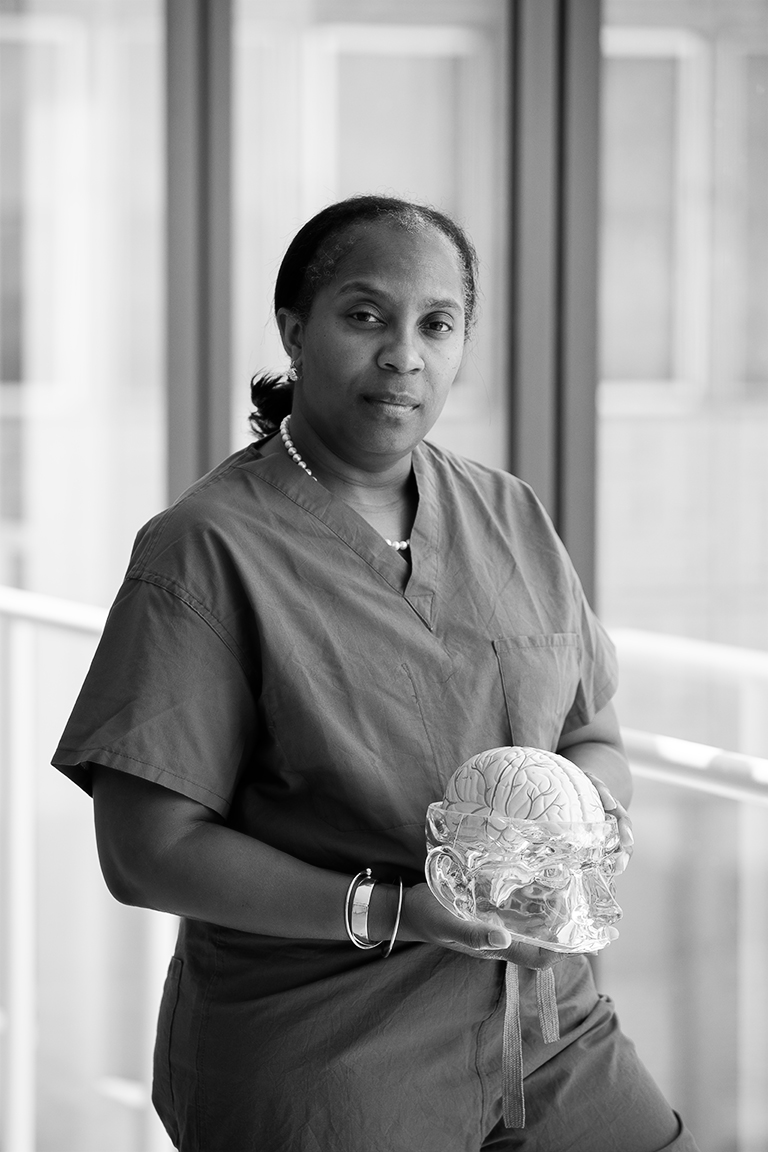 My name is Odette Harris. I am a neurosurgeon at Stanford University Medical Center.

I was born in Jamaica. My grandmother wasborn in the United States to immigrants, and then went to Jamaica which was home to her parents.  She had my mom there and then I believe my mom was eligible for American citizenship through that, so I was too. We came to the States when I was in third grade and I completed my education here. We speak English as a first language and Patois is the vernacular, but there were lots of other cultural differences. That was challenging, initially.

And of course, there are endless stories of racism that I have as a clinician, like being asked to clean the bathroom when wearing a white jacket and a nice dress underneath. None of the external indicators apply when the dominant perception is race. Because for any other person wearing a white coat, the assumption is that they’re a doctor, but that doesn’t apply to me. Once, in Mississippi, I was a keynote speaker at a medical conference and I was standing outside wearing a Donna Karan suit. I thought I looked cutebut then a woman came out of her car and gave me the keys to valet it.

I think the current immigration policies are gut-wrenching. I have a visceral reaction to them.

If I were to sit face to face with a congressman who is anti-immigrant in today’s current political climate, I don’t think I would have any ability to influence the dialogue. That’s what’s so sad about our current political situation. Ten years ago, you could disagree, but still respect each other and hope that a conversation could influence others. Now, people just disagree without willing to invest in the discussion or the conversation. They’re just stuck in their own beliefs. I don’t know the solution to that.

Recently, I was listening to an interview with immigrants. One immigrant was identified as being from Panama.  She was talking about immigration policies that aren’t open to having people come in. She felt this has always been one of our foundational principles. And then they interviewed a Cuban woman who had immigrated as a child and she felt the opposite. Her sentiments: I don’t see why we need to have open borders. The interviewer said, “You and your family came here,” and she said, “Yes, but our country was also a s***hole country and I don’t think we should have people coming from that country anymore.”

What’s sad about this was that she had no insight into this notion that the very policies that she’s espousing would have prevented her from coming to this country. Many of the current policies reflect that same notion of “we have ours and you have to figure out how to get yours,”so to speak. It’s sad.

This kind of thinking underestimates what immigrants have to contribute and the varied perspectives that they bring to our country. We’re stronger for having immigrants.

It’s short sighted, too. Every time I think about these policies, I think about what I would have looked like as a child,to teachers and to politicians, coming to this country:my hair in pigtails, speaking with an accent and not understanding any of the cultural nuances. In today’s climate, the influences and the messages would have been so dominant that I actually wonder what I would have become if I had immigrated in this era versus when I did, earlier. At that time, there was an openness to the understanding, even if it wasn’t perfect, that I could contribute. I could become someone who would benefit from the opportunities of this country and thereby give back as well. I don’t think that would happen now and I don’t think I would be who I am.

The anti-immigrant sentiment stems from racism. We’re open to certain countries and certain races coming to this country. We just don’t want people from certain ‘other’ countries and certain ‘other’ races. Being from one of those ‘other’ countries and one of those ‘other’ races, it’s difficult to not have a visceral reaction. There is no path for immigration for many people, and it’s an absurd notion that fairness and parity exist. This country has never been fair. And in fact, life is not fair.

When my kids say life is not fair, I say, “You’re actually really lucky that life is not fair because the odds of you living in Silicon Valley in this socio-economic strata that you exist in as a black immigrant family are like 0.001 percent. And given the fact that you live this existence, you’re lucky life is not fair.They don’t totally understand, but this notion that life is based on fairness is absurd. The decks are obviously stacked.

Stanford University leads in diversity and appreciates the value that creating a diverse workforce has, particularly in medicine and in shaping the lives of the patients we care for. Our department leads in having trained the most African Americans, and we train volumes of women. And our commitment to diversity is not at the cost of excellence. Seeing the value in it makes us a powerhouse in the field. I think the university itself espouses those principles and for sure, the Medical Center does too.  These are principles that are palpable to us.

With that said, there are still issues. For example, the huge role of immigrants and diversity in healthcare doesn’t change the perspective of those who are anti-immigrant. I’ve taken care of people who are openly racist, openly sexist; it’s irrelevant really. To them, if I’m successful, I’m the exception, not the rule. And actually, my immigrant status in that role doesn’t always help other people of color in this country.

Also, if you are a person of color in Silicon Valley, it’s incredibly complicated. Sometimes we joke back and forth like, “How many black people have you seen this week?” And the answer is, “You.” We live in communities where we don’t make up a whole percent, sometimes. That can be eroding to us, as well as to our children and their experiences in the world. They have very few role models. They can go their entire academic career never having had a teacher of color. Those kinds of influences sociologically have an impact on our kids, and yet that’s where we live and that’s the culture.

I think it’s better here in Stanford’s Medical Center where I see people of color all the time. This is almost a microcosm that is different from when you step out into the world. Because the currency here is education, science, and medicine, you see a much different make up. When a leader says it’s important to lead with inclusion and appreciation, it builds a much more powerful environment.