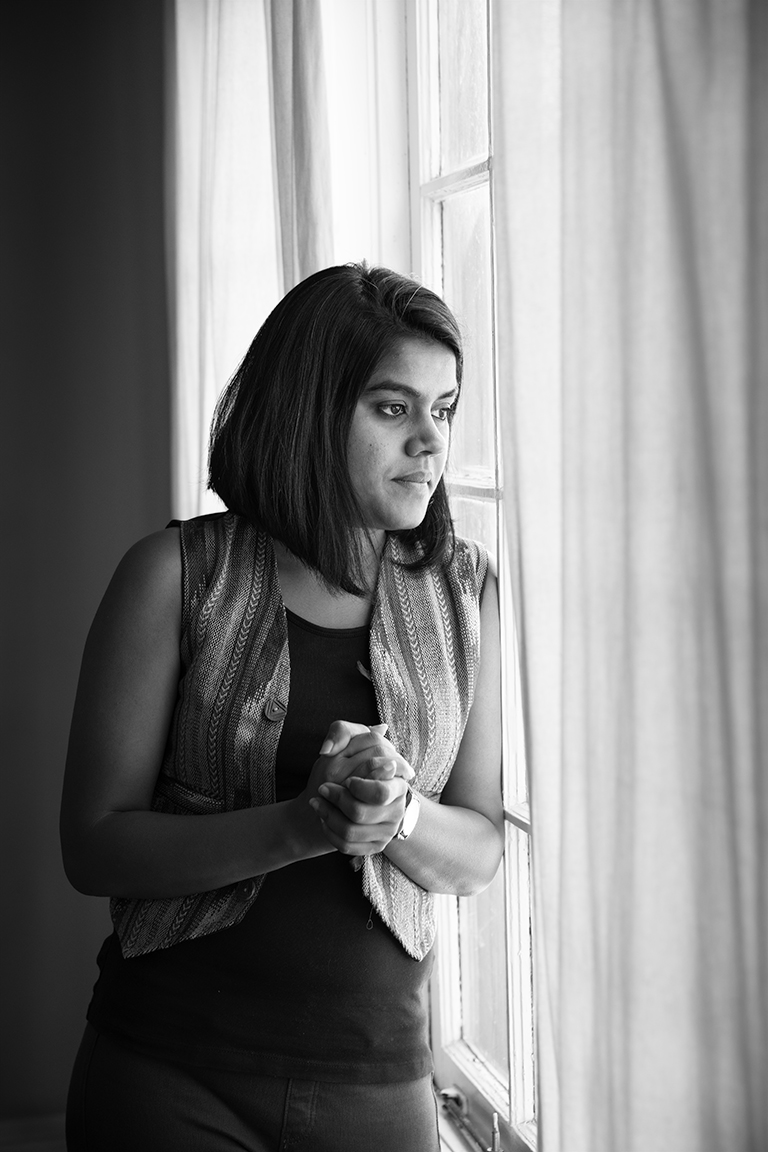 My name is Nilisha Mohapatra.

I came to the U.S. in 2014 on an H4 or a dependent visa with my then husband, now ex. We moved because he had gotten a project here with a company called Cognizant. The original plan was to stay for a year before going back, so it was okay to be on the H4 visa. The H4 visa didn’t allow me to get any employment, even get an education. I didn’t have a social security number, no boarding rights, not even bank accounts. That was frustrating. It was very limiting.

Since 2014, I’ve trying to find a job that would give me the employment visa — the H-1B. It’s called employment-based immigration, where the country allows entry for people or skills that they can’t find in U.S. easily. So, they’re looking for people who have master’s degree or specialized skills. But my background is in psychology, learning, development, and mental health. I have worked with schools, companies, and foster care homes across India, Europe and U.S. to build life skills like resilience, decision-making, and interpersonal skills through experiential learning. And it’s just not been easy to get a job in that field because the response that I always get is that my master’s degree or experience isn’t good enough.

It’s gotten harder because no one’s even willing to entertain the idea of a visa. Initially, in 2014 – 15, they would call me in for interviews. We would have conversations around the financial costs of a visa or the commitment that I need to give to them. But it never worked out. It was mostly because I was new to this country, there was no one who could vouch for my skills or me. And they always needed recommendations, which I didn’t have because I didn’t have a network or community here. Their stance was that if they were going to invest so much in me, they needed to know that I was worth it.

But in the last year and a half, it’s just gotten difficult because no one is willing to take the risk of giving a visa or even trying. The response that I get is that the political climate is so unstable that we don’t want to risk it. I’m told my best chances are marriage, “Why don’t you just get married?” I don’t want to get married.

As of today, I have one more month to be in the U.S. I leave on 12thof September and that’s the end of it. I’ve chosen not to get married for a green card or a visa. I’ve had interviews with some very big companies like LinkedIn, Microsoft, and UC Berkeley. All of them have the resources to give visas, but people are scared to hire immigrants right now. But if the bigger companies expedited the process, it could be completed in a month or two because they have the legal resources and relationships with USCIS to make it happen.

I’m going back to India. At some level, it’s okay.

It does not feel like a drastic uprooting in some ways, but I’ve also spent the last four years here building community, making connections, and just volunteering everywhere to build my skills.  And it’s been challenging surviving on volunteer positions. I was smarter with my finances earlier so I had savings. And then when my divorce came through, I had a little money because we split our assets. So, I put some back into my savings and I planned to use the rest to try to get a job or hire an immigration lawyer. I knew I had time till early September to do whatever I had to do to get a job. I’ve had a lot of people help me in terms of connecting me to the right people in the right companies, offering their houses for me to live in, or even emotional support.

I had a conversation with one of the hiring managers who had taken a real liking towards me.  I asked her what goes on behind the scenes, so I could have a better chance at getting a job. She told me that when they hire someone with non-technical skills — non-engineers — there is a strong push to fill the position locally even if you are the most qualified candidate who applied. It doesn’t matter. They cannot justify that investment in me if they can find someone else who has the minimum qualifications.

I have days of anger and disappointment and frustration because it’s not easy to not internalize the rejections. It takes a lot to separate, to realize it’s not my fault but a bigger systemic problem, which I can’t seem to break through in this moment. It’s hard.

I have found a silver lining in this divisive political situation in the fact that there are a lot of people who are taking a stance for immigrants, for people of color, and for humanity. My hope is that more people find solidarity and compassion, to have the ability to work through differences and not retreat with fear. I want people to feel safer, because everyone is so on edge. Everyone I speak to says, “Oh my god, I can’t sleep at night.”