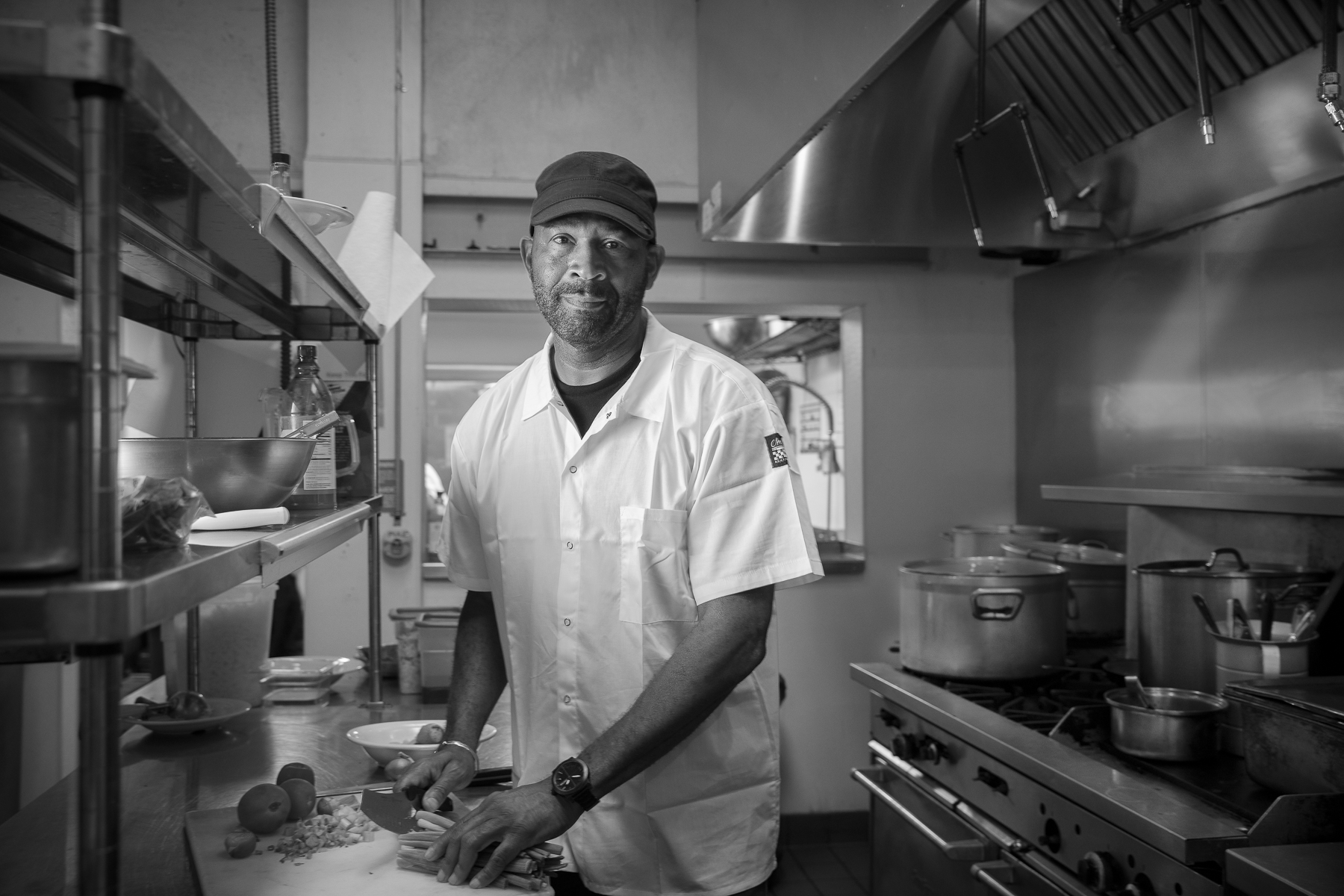 Chef and Owner of Kingston 11

My name is Nigel Jones and I am originally from Kingston Jamaica. I’m the owner and chef at Kingston 11 Cuisine here in Oakland, California.

I learned how to cook in Jamaica. Whereas my grandmother was an excellent cook and as a child, I would complain sometimes about some of the things that she would cook. My grandmother told me, “Don’t complain about my cooking. If you want to complain, you better learn how to cook yourself.” She embraced me in the kitchen and gave me the opportunity to really learn cooking skills. I was 10 years old at that point.

I came here when I was 16 years old. I came to United States and lived in the Bronx, New York, where there were many Jamaicans but it was also very diverse community. I came here as a permanent green card holder and became a citizen. When I started to work in garment industry and started to travel outside the United States, I found it was a lot easier to move from country to country with an American passport versus a Jamaican passport. Given today’s circumstances, it wouldn’t even be possible for me to even get a green card.

The current political situation is affecting me on a personal and a professional basis. I see things nationally and globally and I also know that in order for me to be effective, I have to act locally.

As a Jamaican and living in Jamaica until I was 16, one of the things I appreciated is that in that country, as we looked to the United States, it was always a country that had certain ideals that no matter what your circumstances are wherever you are, you had an opportunity, if you go to the United States, that things could be better. Even though, in reality, it may not have been that way consistently, it’s important. It’s important, not just for Americans, but other people around the world; Palestinians, Israelis, Jamaicans, and any country you can think of where people are living in stressful situations and you have aspirations. It doesn’t have to necessarily be economic stress, but it could be creative stress. You have a sense that if you go to America or just interact with Americans or see what Americans have to provide, there is freedom in that mindset.

It’s a sad thing for me is that as a country, we’re losing that. And as we lose that in terms of becoming that beacon of aspiration for the people, equally important, other people who are dealing with stress in their local environment, they don’t have that sense of if I escape, I can change my life. Even if you never arrive in America, the idea of that there is something else beyond your current environment, it’s important and we trust that in this country.

Those are the things that I want to help change again by acting locally in terms of how I operate my business in a very multicultural environment. You look around people that we have here as customers and our staff, they’re Jamaican, they’re Latinos, they’re White, they’re gay, they’re straight. That’s our customer base and that’s our employee base and that’s very important to us in terms of setting that example in our community.

It’s not about just the food. As a business owner, I have to think about what’s my objective beyond providing nourishing food. For me, it’s about how my business exists in the community for our customer, for our staff and for just as an example beyond our borders. That’s important to me.

My hope for this country is that we keep pushing to the ideals that were never really 100 percent there in the past, but the ideals are worthwhile pursuing. As everybody participates in that and recognizes that we’re in a situation where as we get closer to the ideals, it’s going to get harder. And that’s one of the things, I think, is happening right now. Even the founders of this country talk about equal rights and stuff, but they owned slaves. And so as America elected a black president, the country freaked out as we got closer towards moving towards an ideal society.

Obama didn’t become president because black people voted for him. Black people are only 10 percent of the population so he had to have a lot of white people voting for him. So obviously, the country achieved that and we had a backlash. We’re going to continue to make progress and we’re going to have more backlash. Everybody just has to be confident in their ability to keep pushing forward, in spite of some of the backlash that we have experienced.

Oakland is a very activist multicultural community. White folks who are in Oakland are here because they want to be around people who are of different diversity. They can be anywhere they can, and they choose to be here.

As you look around, look at these two guys coming into the restaurant. They are obviously not black in terms of African American. They could be Latino, they could be Indian and that’s how we want it. They walk in here with a sense of confidence that they’re going to get served, that they’re going to have a good meal and that they belong, and that’s very important for all of us. I do have a sense of confidence in where we’re heading based on what we’re doing locally.

For instance, I have a Jamaican restaurant. I feel like people are supporting ethnic restaurants. They don’t want some other culture bringing somebody else’s food to them. They want the real thing from those communities. That’s one thing that’s changed in a positive way. So it’s opportunity for me and people from different cultures to own businesses and do it in an authentic way from our point of view through our food. And it is important to know that we have an audience that respects that and supports us.

It creates an opportunity also, as we talked about what’s happening globally and nationally to release some of the tension around all this noise about immigration, rapists and all this other nonsense, where people can come in here and enjoy food from a different culture that will lower the barrier in terms of understanding between different people. There’s connection. So entertainment, music, food, those kinds of things allows you to transcend some of the nonsense easier.