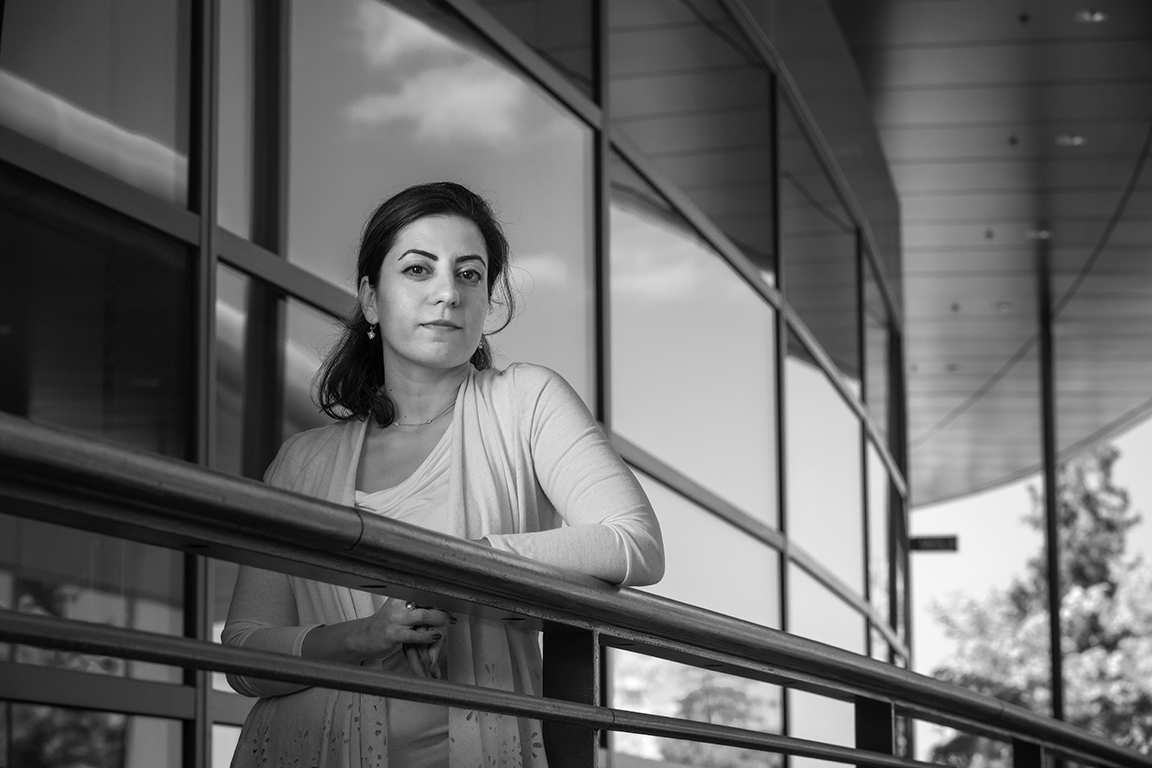 My name is Narges Baniasadi. I grew up in Tehran, Iran.

I studied computer engineering in one of the best universities in Iran. My family encouraged me to apply abroad to continue my studies as I was one of the top students in my field. At that time at the age of 21,  to me the United States represented the best of universities. I thought this is where the smartest people in the world are going and it would be a great opportunity to continue my education. I got accepted to a few universities later, including Stanford University. I came to Stanford University in 2004 to pursue my PhD in Electrical Engineering.

It was not easy at all to come to Stanford because at that time, 14 years ago, the relationships between Iran and U.S. was tense and travel between the two countries was difficult. It is much more difficult and mostly impossible today with the Travel Ban.

Also,  the exams one needed to take like the GRE and TOEFL were not available in Iran. So, I ended up going to Turkey three times for the exams, then for the interview, and then to get my visa. It was not an easy process, but finally, I got my single entry student visa. It was very difficult to leave Iran because I knew it would be a while until I see my family again.

I arrived in Stanford in 2004 with a background in Computer Engineering and very soon got interested to research  applications of computer science and engineering in medicine.

I spent seven years at Stanford researching in the intersection of medicine, molecular biology, computer science, and statistics.

I was working with three departments at Stanford University — the Medical School, Electrical Engineering, Statistics department — and the Computer Science department of UC Berkeley. I was the lead student of a major research project and our goal was to understand the intracellular communication mechanisms, especially in cancer.  That required understanding of biology, but also applying mathematical and statistical models to the biological data. The data analysis was a big bottleneck to the research and could take weeks at a time on the Stanford computer cluster.

My PhD thesis topic was how to run the analysis at scale, quickly and easily.  Our research got support from US National Cancer Institute and we published multiple peer reviewed papers and filed patents on our innovations.

As I was getting close to graduation, I realized the opportunity to bring the research to the industry and to make a difference in life sciences y and medical industries using software and computer technology. I realized the kind of small work that we did at Stanford and UC Berkeley could go into making products that make a big difference for patients and the drug development industry.

I started a company called Bina. Bina in Persian and Hebrew means insight and wisdom. Our goal was to create insight out of biological data. We built distributed software technologies and artificial intelligence to make sense of DNA sequencing data.

Our software was initially used by researchers. Stanford Genetics department was our first customer. Later more universities and Pharma companies started using our products in their drug discovery and research units.

Fundraising for the startup was challenging!  I didn’t fit the typical founder image. The very first group of investors who supported me were actually from the Iranian community and their friends, but a few non-Iranians also participated.  I think it was immigrants supporting immigrants mostly. But it never crossed my mind to think if a person is American or not. From the beginning, when I came to this country, it was all about working with many different people but towards similar goals of taking science forward or building products to improve medicine.

Being a woman might be even more difficult than being an immigrant in the case of starting your own tech company. Investors will question you more, than they would question a male CEO. And I was aware of the fact that all of my board members and management team were male when we began.

Our company gradually got more and more traction and we eventually sold our company to Roche, where I became the Vice President of Informatics and led the product strategy and development for Roche DNA Sequencing business for three years.

The work at Roche was intellectually stimulating and rewarding. I learned what it takes to work in a global large organization of ~100,000 people. We developed products for the clinical oncology and genomics industries that helped oncologists make more informed decisions in diagnosis and treatment of cancer patients.

Recently, I left my work at Roche to focus more on helping entrepreneurs with their innovations in social and health technology research and entrepreneurship.

Iranian Americans are under great pressure inside Iran and US. The travel ban has seperated many families and made it very difficult for us to stay in touch with our friends and families in Iran. US-imposed sanctions and threats have made the life of ordinary Iranians very difficult and in cases access to basic necessities and life saving medicine is difficult. Also students in US can no longer receive supports from their families in Iran given the current financial situation and restrictions.

I know much fewer students are coming to US from Iran as a result of these limitations and growing anxieties.

I know friends who have a sick parent, and they cannot bring them here or they cannot go visit. I know a student who got cancer, and their parents cannot come to see their child.

I think we are afraid of what we don’t know. When we spend time with other people, we might see they are not that different, or that they just came here to do good. Their motivations are usually very good.

These borders and tensions that we create for ourselves are not serving us. We share this small planet, and we share very big pressing threats today such as climate change and water scarcity. It’s better to be united and solve them.

Other global trends such as globalization, technology and automation, are changing the nature of jobs and economy and the inequality in the US and other countries have resulted in loss of good opportunities for many communities. We need to work together to empower everyone and equip them with the right skills and education for the future of work. We need to have people from all around the world to work on these problems together so we have vibrant and thriving local communities as well as stable and peaceful societies.

I think there are so many amazing people in this country and my hope is that they will be united. I hope these challenges be awake-up call to unite good people. And as we go through this difficult time, I hope, we get out of it more human and more loving.