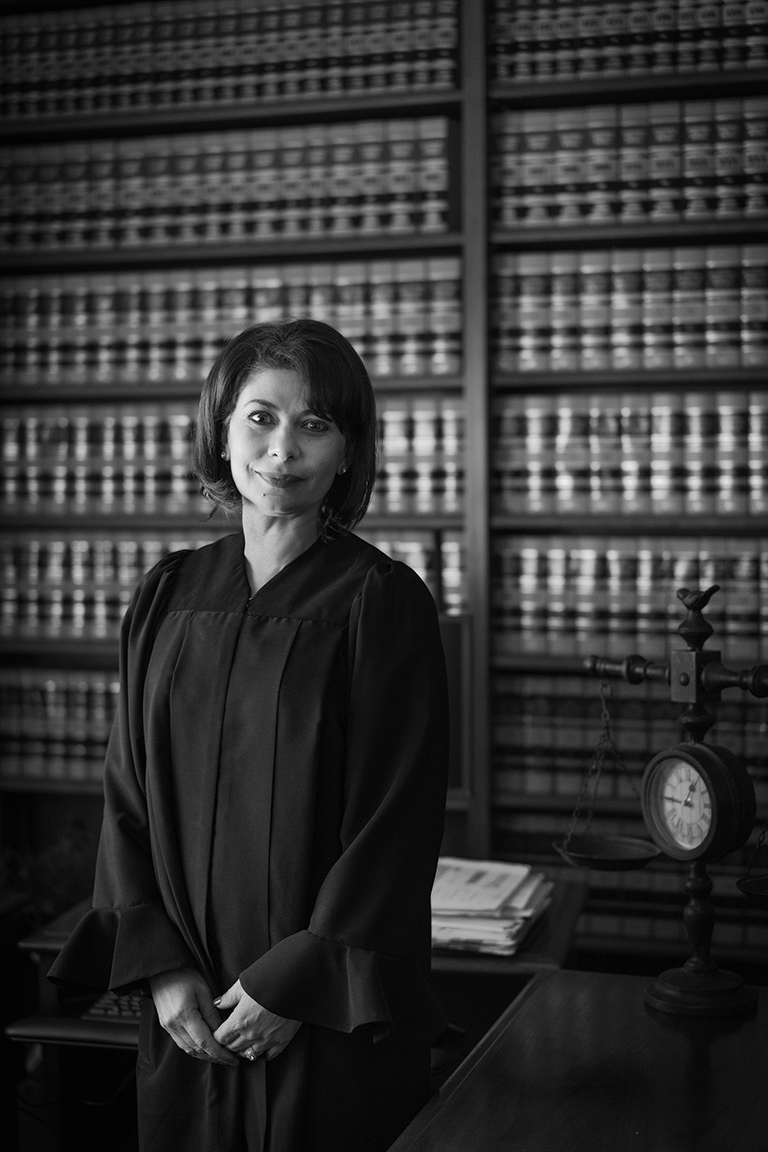 The 1979 Islamic Revolution in Iran is what prompted our immigration here. My parents uprooted from their life back in Iran for the promise of freedom, education, and opportunities for my sister and me.

It was a challenging time being an immigrant from Iran, in the midst of the 1979 Hostage crisis. Some of my memories from those early days include family dinners with the nightly news playing in the background – – and Peter Jennings (the newscaster) adding the number of days American hostages were in captivity in Iran. I could see the worry in my parents’ eyes. And at school, well, all the friendships had already been formed by the 6th grade. And I was the new kid, with the funky accent, from Iran. It was  difficult time being the new kid from that country. But despite the challenges, we loved being here. We did our best to assimilate wholeheartedly.

Fast forward to 1995. I was the first Iranian-American to be sworn in as a Deputy District Attorney in Santa Clara County. Talk about the land of opportunity!

But those early days had challenges of its own. First of all, Santa Clara County D.A’s office is one of the most sought after DA’s offices nationwide. It was extremely challenging getting employed. I came in as a volunteer attorney. After several months, I was finally employed. It was gratifying knowing that I had got my foot in the door, proved my work ethic, and showed what I was capable of. But then there were different challenges along the way. In those early days, there were -7 of us on the misdemeanor unit. Out of the seven, all were men, except me. Out of the 6 men, 5 were white, one African American.

I remember being in court one day and a defense attorney coming up to me saying, “Excuse me, are you the Spanish interpreter? Do you know when the DA is going to get here?” I was sitting at counsel table – where the DA always sits. But even despite my location and the files in front of me, it was difficult for people to recognize I’m actually the deputy district attorney prosecuting the cases. I said “No I’m sorry I don’t speak Spanish – and I AM the D.A.” I wasn’t offended. I don’t think he meant any disrespect. It occurred to me that he just didn’t know better. He did not expect the olive-complected young woman in the courtroom to be the D.A. But that was part of what made it motivating. To be the new face of D.A.s, be the new face of the profession, and slowly add to its diversity.

I was a deputy district attorney for almost 23 years in Santa Clara County. Through time, especially the later years,  a lot of people started encouraging me to put in for the bench. I never had any judicial aspirations. It wasn’t a childhood dream, or a goal when I was in law school, or anything I aspired throughout my legal career. I really appreciated the vote of confidence, but I was gratified being an advocate.

Judge Brian Walsh, the Presiding Judge at the time, was quite persistent and played an instrumental role.  He started having more serious discussions with me about why he thought I was well suited for the bench, and why I should put in for it.  I thought if the presiding judge sees this potential in me, maybe I shouldn’t dismiss the idea. I gave it serious thought.

I did a lot of soul-searching and reflecting, I discussed it with my husband, more reflecting and soul searching. Ultimately, I thought, I’m a public servant at my core. It’s what I’ve done my entire career. And being a judge, is the ultimate public service in the legal profession. I am not doing this for the status or the robe or the prestige, it’s for the public service. It is a natural extension of my life’s work. Once I had that epiphany with myself, I decided to put in for it.

To become a judge, you either go the appointment route or the election route. Election route involves  a lot of fundraisingand campaigning. I decided to go the appointment route. The appointment route involves extensive vetting by the Governor’s office, with screening and recommendation by state judicial nomination and evaluation commission, and the local bar association. It involves an initial application with 74 questions, and subparts to each question. If one passes through the initial screening, you are asked to submit a list of 75 personal references in addition to the names of opposing counsel, the judges you’ve appeared in front of, etc.  It’s long and intense. And then after the additional vetting,you go in for a series of interviews. The next stage is never guaranteed from one interview to the next to the next. Fortunately, I went through the process and about last year this time, I heard the news. I was appointed by Governor Brown, as the first Iranian- American judge in Santa Clara County.

I am currently serving on the Family Violence Unit of the Criminal Division. It involves complex family dynamics- from intimate partner violence, to violence between siblings, son against father, etc. The best I can describe it is that it feels like a daily workout of your heart and your mind. It’s the best way I can explain it. Because you’re balancing so many different factors impacting people’s lives. Balancing the rights of the accused, the victim’s safety, and public safety. It’s very challenging, but itis also fulfilling knowing that you’re making a direct impact on people’s lives, based on principles of fairness and under the rule of law.  It is truly an honor to have been entrusted with this enormous responsibility.

When people hear  “Iranian-American”, I hope their first perception or reaction reflects the kindness and hospitable nature of our culture. I certainly hope their first image of us isn’t “axis of evil”or “terrorist”or other inaccurate and derogatory terms thrown around. Because if one truly studies Iranian Americans and their contribution to the U.S., they will find that we are one of the most prolific immigrant groups to the United States. Whether in medical sciences,  the tech industry or in public service,we are meaningful contributors to the fabric of America. I hope that people have a positive accurate image of who we actually are. The best way is to get to know your neighbors, your colleagues, ask questions, share a meal. Just interact and get to know the culture. I trust you will be touched by our warmth, and impressed by the drive and ambition of most.

I hope to be a source of inspiration to young immigrants- of any background –  to demonstrate that it is doable. Hopefully by following my journey and knowing that English was my second language, hearing about my obstacles, but that I went on to become a judge will be motivating. This truly is the land of opportunity. If you work hard and stay disciplined, you will realize your highest aspirations, beyond what you may have even thought possible. In my own native country, in Iran, right now I would not be able to be a judge because women are not allowed to be judges. How ironic is that? I’m always grateful to America for being the land of opportunity and I also would like young people or immigrants to know that as long as you work hard, this is a place where truly you can realize your dreams and your hopes.

And then also, in terms of fairness and open access to our courts, if we have a diverse bench that is reflective of the community it serves –  everyone from different ethnicities, races, socio-economic classes-  the larger community will see that  the presider of justice- the one making rulings and making decisions – is somebody that looks like them. It promotes public confidence in the judiciary and in our legal system.

There’s a picture over there of my parents robing me, putting on the judicial robe. When earlier you asked the question “what brought you to the United States” and followed up with “did it fulfill your expectations?”  well, I guess that picture right there answers the question. Sometimes I get choked up.

I remember calling my parents to tell them about the governor’s office having called with news of my appointment. I will never forget how deeply happy they were. They still are!

My parents uprooted their lives, in the pinnacle of their lives, in the hopes of freedom, higher education, and better opportunities for their daughters. And my Judicial Investiture, taking the oath to uphold the Constitution of the United States, and putting on the judicial robe was the absolute culmination of all of their hard work and dreams. That moment, to me, captures two quintessential truths about this great country: America is the land of opportunity, and likewise, America is a nation of immigrants.