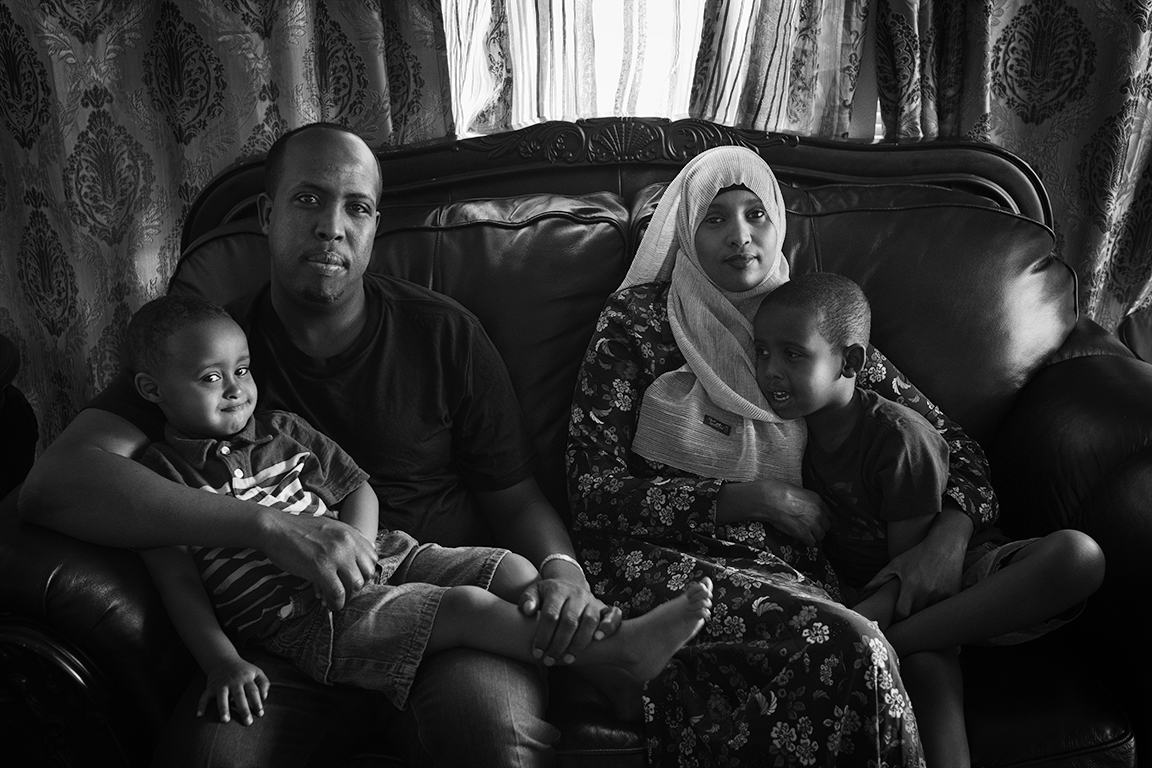 My name is Mohamed Ibrahim and my wife is Layla Yusuf. We are both refugees from Somalia.

There was a civil war in Somalia and a million Somalians became refugees and settled in a refugee camp called Ifo in Kenya.Our family qualified for refugee resettlement status through the United Nations High Commissioner for Refugees. In 2001, my mom and my brother and sister, settled in San Diego and from there we moved here to San Jose. It was not too difficult  getting refugee status at that time. it was a little easier because not too many people were coming to the US as a refugees  from Somalia. As far as the US denying refugee status, as I know, it wasn’t that difficult. You were just getting your name listed and family members listed and they just waited until we got permission to come to the US.

Layla came later. She was in a refugee camp in Cairo Egypt. As Somali people ran away from their country, they would go anywhere they could possibly go to resettle. And for me, it was in Kenya and for Layla it was in Egypt. She came here in 2012 after ten years after being in the refugee camp in Egypt.

Today especially is a sad day because the Supreme Court just upheld the ban so Muslims from Somalia will not even be allowed to come to the US.

If the Supreme Court decided that this is going to be the way, I don’t have too much power, but I think it’s a little bit kind of upsetting or disappointed to not only the Somali people but people from other countries too. Everybody wants to come here, this is the opportunity land, people come here for a reason. I wouldn’t come here if my country was beautiful. People come here to go after their dream. And if the Supreme Court decided to ban all refugees, I hope one day they will rethink their decision. I want them to know that there are good people that want to come here and make a good life.

The ban doesn’t affect me.  I’m a US citizen, I don’t think that I will be kicked out of the country. But there are so many people that want to become legal, maybe those people will be affected  or relatives who want to come here legally. I believe everybody who wants to come to the country should come here legally — whether a refugee or whether a student visa, some form of legal way just like I did.

I understand the politics of this country. It’s difficult to change someone’s mind if he thinks that refugees are the problem. But I think that one day the government will reverse their decision because this country was founded on refugees. They wouldn’t be here if their great grandparents or dad or father was not a refugee. The judges would not sit on the Supreme Court if their family was not refugees at some point.

I am also a student. I study finance. I go to San Jose State. I have my own business also. I’m a financial analyst. Layla became a citizen just a few weeks ago. She is going to school now studying to become a nurse. And we are raising two kids and just like I said, going after the American dream.

The best way to describe that, this country is all about family. It’s all about working together as a team work, as a community, as family, friends, neighbors, and that’s the beauty. All humanity should be one community, one people, and that’s what this country was all about from the beginning to this time. And I think that the more we keep that route, I think we will succeed.