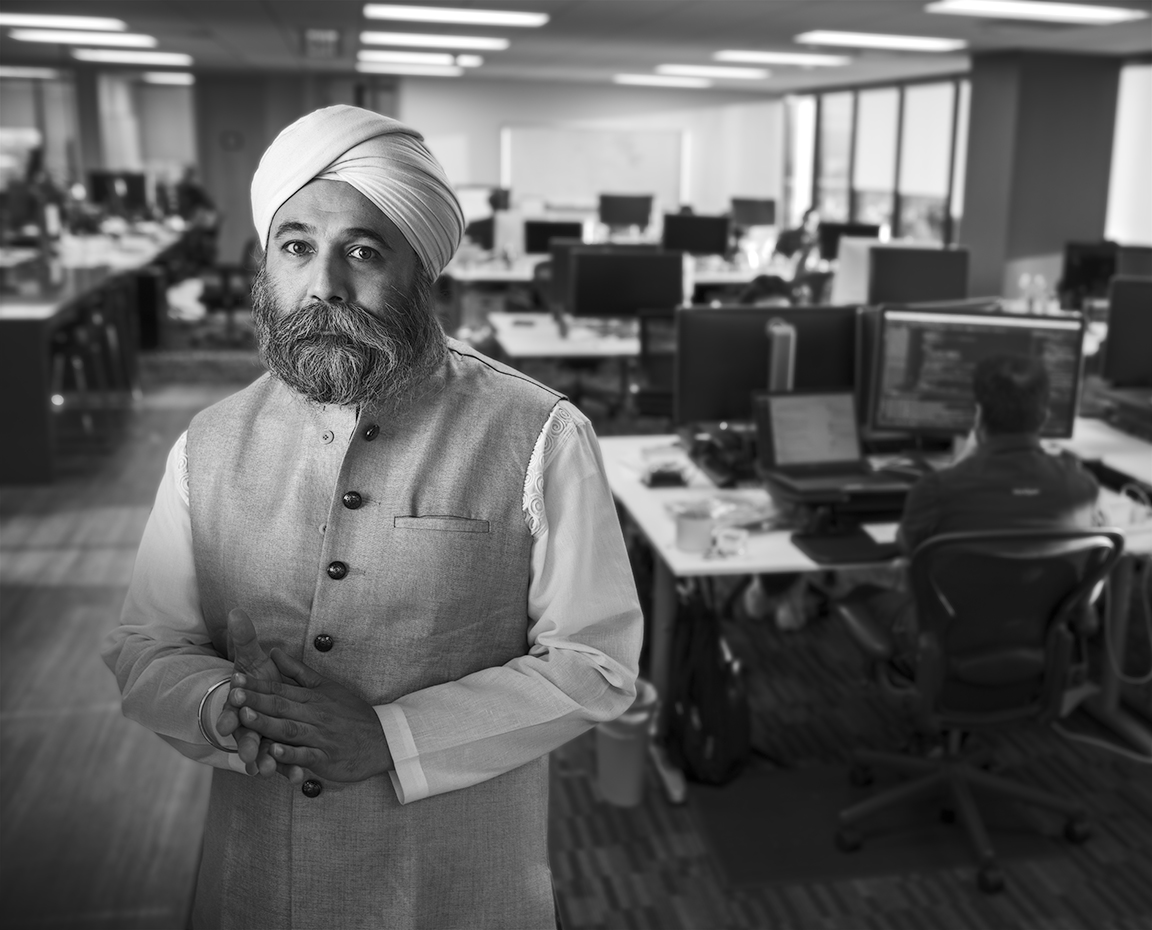 My name is Mayank Bawa. I’m from India and I’m a Sikh.

I grew up in Orissa, which is in the eastern part of India. My parents used to live in a city in Orissa and then when they retired, we all moved to Delhi. From Delhi, then I came over to Stanford University to do my PhD in computer science. Then I started a company based on my thesis at Stanford that created the Big Data category. There’s a big IT category these days called Big Data where people take in large volumes of data and they want to run an analysis on it so that they can make better business decisions than just making decisions based on instinct. We created that company. That company was very successful and was acquired by a public company called Teradata.

I ran the Big Data division at Teradata for three years. Then I transitioned out to start my next startup called WorkSpan. We have been building WorkSpan for three and a half years now. As the world is getting more connected, a lot more business partnerships are happening where one company needs to work with another so that they can go to market together. WorkSpan gives them a shared system where both companies worldwide can come together. Before WorkSpan, there was no platform for joint marketing collaboration that existed between two companies. All work used to happen using email and spreadsheets. With WorkSpan, companies can now engage with their ecosystem and manage all their partnerships.

We have about 50 employees now. The overwhelming majority are US citizens, about 80%. Less than 20% are immigrants. For the last couple of years immigration policies have been really tightened. It’s difficult for us to hire an immigrant who’s not a citizen because the H-1B process takes a very long time and often applications get rejected.

So, the immigration policies and visa issues are affecting the high-tech economy. It is affecting the rate at which we are hiring and therefore the rate at which we can grow our company. In the Bay Area, hiring is getting hard because the available pool is decreasing. There is so much competitive pressure in hiring because there are not enough people who can do the jobs that are needed.

There are also fewer foreign students applying to go to graduate school here because they are afraid they can’t get jobs afterwards. We have experienced problems in hiring students who recently graduated from school or are foreign citizens who did higher education in the US. It takes forever for the employment visa to come through which makes companies hesitant to hire them. If I extend an offer and their visa transfer gets rejected, then we’ll suddenly have an open position again six months from now or nine months from now. And now a person that has been to school and trained to work here has to leave.

The kind of work that we do is very specialized. It takes about a year for people to become confident and capable of contributing to our code by themselves. If anything happens, like immigration issues, then we have to start all over. Then it takes one more year for the next person to ramp up. It’s definitely impacting the rate at which we can grow. If we had more talented people who could work with us longer, I really think the whole Bay Area economy would grow a lot faster than it is today.

I think we should be welcoming the highly skilled people who have gone to school here. Why send them back to their own countries? Then they’re contributing to other countries’ economies. That makes no sense for me. Those guys came here; they have paid good money to be educated here, now they could continue to build a vibrant community. I’m not unique in any way. I know hundreds of people just like me who have gone on to contribute in tremendous ways. We want them to be in the US for a long period of time.

I think America, as a country, was very open when I came into the country. I did my undergraduate at IIT Bombay, in computer science, and then I came to the Stanford University Computer Science Department to do my PhD. in 1999. The environment was very different.

When we came here, the World Wide Web was being developed around that time. The first wave of Internet companies had been formed. There were lots of creative computer science projects that were going on, and I got to participate in them at Stanford. I joined the same lab that the Google founders were in at Stanford before they left to start Google. Other people at that lab were continuing to do work on crawling the web, searching the web, and improving the algorithms. Then, they formed companies around algorithms they created that eventually Google and Amazon and Wal-Mart acquired and included it in their services.

The amazing thing is how much opportunity has been created by technology companies. The last time I checked, there were at least 500 companies in Big Data. The research we did 15 years ago has now gone on to create so much economic activity. It has created 500 companies that must have created tens of thousands of jobs for people who are crafting those tools to be better. Then the impact created by companies, who have been using it to improve their own business activity, that must be in tens of billions of dollars.

Professionally, I’m very proud of that we played a role in creating that huge sector that didn’t exist before. And that all started from the research work that we got to do in the university. I’m similarly hopeful that the work that we’re doing at WorkSpan will significantly help business activity worldwide.

Professionally, I think it’s been a tremendous 19 years since I have been in the US. My previous company was called Aster Data Systems. There were three founders of that company. One was me. I was from India. My second co-founder was from Greece. And my third co-founder was a US citizen, but he was born in Romania. All three of us met in Stanford. We were all graduate students at Stanford. All of us were in the same PhD program. The three of us then left Stanford to start my previous company.

Our first hire was a Canadian. Our second and third hires were US citizens. Our fourth hire was an Indian. Our fifth hire was a Brazilian. I remember pausing a bit back in 2005 when we formed this early team of eight people to go start building this new idea for Big Data. I looked at all of these amazingly bright, brilliant people who left their jobs at Microsoft to come join us or dropped out of the Stanford PhD  program to start with us. All of them from different countries. And I was thinking that could only happen in the Bay Area. There’s nowhere else in the world where eight people of different nationalities can come together and say we’re going to go build this new product from scratch. We don’t know whether it will work or not, but we’re going to do it. These were the brightest people from these different countries. And they went on to do it. Isn’t that amazing?

In terms of our personal contributions to this country, I think it is important to say we are followers of the Sikh religion. Sikhs have been a minority everywhere, all through time. We have a rich set of cultural traditions that come from our religious beliefs. Our faith believes in giving back to the community. For example, at Sikh temples, we often prepare food that is served to people for free. We believe thatwhen people sit on the same level and eat together, it builds community. You could be of different faiths, you could have different points of view, but if you’re eating the same food, then naturally, you foster a feeling of community and equality. As opposed to people eating separately, not wanting to talk to each other. Langar is the Sikh tradition of preparing and serving free community food to bring people together.

There are at least ten Gurudwaras, Sikh temples, in the Bay Area. Gurudwara means the door to reach the Guru. So this tradition of preparing food and making it available to the community is happening at least ten places every day. We are working to find ways we can let other people know who Sikhs are and what we believe in.

This country is a beacon for all kinds of people to come together and the country provides them opportunities to educate and better themselves, then opportunities to join the mainstream economy. We have to preserve the belief that everybody is equal, everybody gets to participate in the pursuit of life, liberty and happiness through laws and action. If we can make that to happen, truly, for all citizens and legal immigrants, I think this country can become a magnet for people who will lift up all of society.

I think there is tremendous opportunity everywhere. Maybe people have stopped finding opportunities, and maybe we need to talk about creating and finding opportunities everywhere in the US, not only on a few pockets of the US. Those are the kinds of conversations we need to have, making sure we are in it together. We have got to find the right opportunities that work for all of us, not for the privileged few. What we do in this country influences almost every country in the world, and that’s an immense moral responsibility.