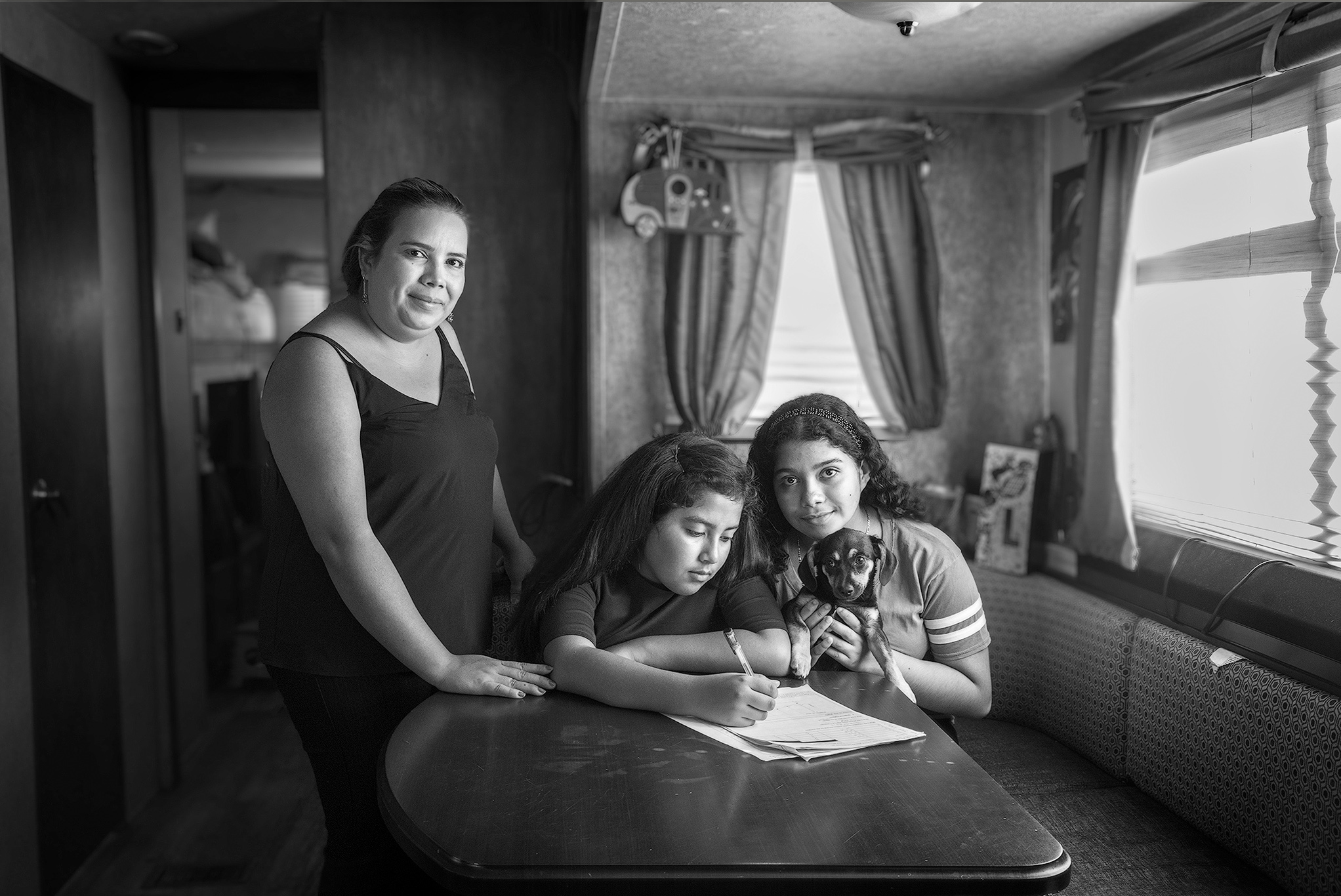 I was born in El Salvador and I lived there for 28 years. I finished high school and started at the university to be an electrical engineer. I worked in a restaurant. I was a manager. The pay was very good. My little baby Lillian was in preschool. My older daughter Violetta was in fourth grade in a private school. I was very happy.

In 2013 my life changed. Gangs started threatening my husband.

I want to tell you what gangs are like in El Salvador. People in gangs don’t look like the gangs in movies. They don’t have tattoos. They don’t wear baggy pants. Sometimes they wear suits. They dress nicely.

Our problems started when my husband tried to protect our friends from a gang. Then, the gang would come up to my husband. They told my husband “you need to steal money from the cash register at the bakery where you work.” But my husband refused. He said, “I’m not going to steal from the bakery.” Every day they would say that and every day he would say “no”. It became clear that his life was in danger. We made a huge decision. We decided it would be safest for our family if he escaped to the United States.

Then, many people in the gangs started asking me for money. They said, “Your husband is in the US. He must be sending you money. Give me two thousand dollars.”

One day my daughters and I went to the mall to pick up some money from my husband. We took the bus. Suddenly, a woman grabbed my daughter’s hand and tried to pull her off the bus. The other people on the bus pulled my daughter back. I was so scared so I went to the police. The policeman said, “I want to help you, but I can’t because these people are very dangerous. If you have the possibility of going to the US, go. We can’t protect you.”

A few days later, a man came to our door. He said, “If you don’t pay, I will kidnap your two daughters.” Two days after that, I left for the United States.

My little daughter was four years old and my big daughter was nine years old. When I left I only took two dresses for my daughters and one change of clothes for me and that’s it.

To get to the border, we took nine buses.

In Reynosa, Tamaulipas we paid a coyote to cross the river border by boat. On the other side, the coyote said, “Wait here for me. I will be back in ten minutes?” We waited ten minutes. Then twenty. Then thirty. After an hour, I called my husband on my cell phone. I told my husband, “The coyote left us here, all alone. I think I am in the United States, but I don’t know where.”

“Can you see anything around you? The lady asked.”  Only trees, ” I said.

She said, “Continue walking until you see some buildings.” So we walked for one hour. We were so cold and wet from the river. My little daughter was crying.

Then, two policemen pointed guns at us. The policeman said, “You can’t be here. You are illegal.” They took us to a detention center. We slept on the floor in a big room without any blankets. We were in Brownsville, Texas. The next day they called my husband and the day after that we took a plane to San Francisco and met my husband there.

When I got here, I had to wear a GPS bracelet on my ankle for six months. It was big and heavy and very embarrassing. I had to charge the bracelet’s battery for an hour every day so I sat next to an outlet while it charged because it was locked around my ankle. But I am very fortunate. I proved to immigration that my life was in danger in El Salvador and now I have asylum.

When I came here I worked at a restaurant, but I wanted to do something more useful with my time. I volunteered at a school and I knew I wanted to be a teacher because I loved helping the kids.

One day my friend told there was an opening for an assistant teacher at a preschool. The principal only spoke English. And I was scared. My husband told me I wouldn’t get the job because I had very few Early Childhood units. But other people said, “Go apply; go apply.”

I was so nervous. In the interview, I told the principal, “I study English. I am taking ECE(early childhood education) classes but I don’t have a lot of units.” Then the principal said, “Yes, but you have a letter of recommendation. And you have experience volunteering. This is the perfect job for you.” I went home and I told my husband, “This job is mine.” That was the day that English changed my life.

My plan is to graduate from Canada in 2019 and then go to the university to study to be a first grade teacher. That is my dream job.

A local nonprofit, Upward Scholars, makes it possible for me to reach my goal. My pay is $13.50 an hour. My husband is a butcher. His pay is $15.00 an hour. My books are very expensive, especially my ECE books. Upwards Scholars covers those expenses and they also gave me a laptop! And I take the bus, which is almost $70 a month and it pays for that too! And I have a tutor who always explains my homework to me.

Now I go to school full-time and also work 20 hours a week. It is tiring but I won’t stop. Now, I am a licensed pre-school teacher. They approved asylum this year around March. My education helped me a lot because when I went to the immigration court the first time I didn’t speak English and had somebody translate for me and they didn’t translate what I said.. This time, when I went to immigration court, I could do it by myself. Also, I took all the papers from Cañada College and all my achievements to the judge and he said that I was on my way to doing something right and I was a good citizen and he approved my asylum. It was something really good for me to study.

My plans are to continue education and transfer to the university, and then open my own pre-school. I think I can do it here because there are a lot of people who want to help you if you want to continue your education. Upwards Scholars helped me get though community college. With a little bit of help and a little determination, you can complete your goals.

I always say to my daughters, “If I can study, you can too.” They see me studying and they know they need to study too. I want them to know that, in the United States, anything is possible.