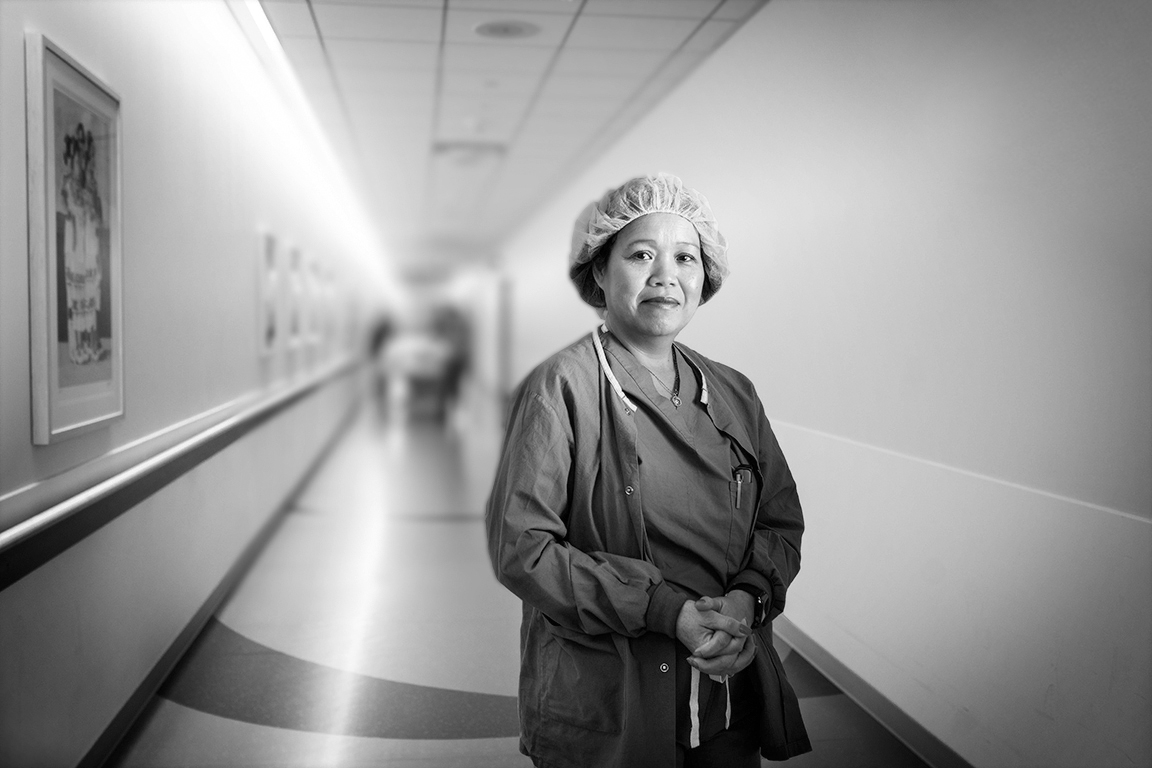 My name is Marilynne. I am originally from Vietnam. I came as a refugee to the United States in 1975 when the communists took over Vietnam. I was 11 years old. In Vietnam I was just a peasant girl. I am the oldest of five kids so I took care of my siblings while my parents worked. I never went to school. I came here and I started school. At 11, I was part of a kindergarten group trying to learn my ABC’s. I graduated at 18 from high school.

After high school I went to nursing school. Because I had to work fulltime and go to school part time it took me a long time to get my degree. I got my nursing degree in 1991 from Florida Atlantic University. In 1994, I moved out to California. I worked at Children’s Oakland hospital as a pediatric nurse in the intensive care unit until 2011 when I transferred here to Lucille Packard Children’s Hospital at Stanford and specialized in pediatric open-heart surgery.

My family was part of the “boat people” exodus from Vietnam. We went from Vietnam to Guam Island. The boat journey took about a week. When we left Vietnam, the communists were shooting at us so we just got on one of the boats. There were many boats. We had no money. We begged the boat operator to let us get on the boat.

It was a small boat but a bigger boat picked us up. I don’t think they were equipped to pick up refugees, but they did anyway. We didn’t have much food. My dad, actually, when we were running, somebody just threw away a really expensive camera and he just picked it up and put it around his neck thinking it was something he could use later. When we were running, people were just dropping their things everywhere at the beach because of the shooting. We were just trying to escape. Actually, the camera fed us. My father asked a guy to translate for him. He traded that camera for a box of canned good and then split it with the guy who translated for us. That’s how we survived on the boat for a week.

When we were in Guam, the refugee program there selected us to come to Fort Chaffee in Arkansas. We waited for a sponsor there. A Baptist church from Dudley, Missouri sponsored us. Really nice folks. We didn’t speak any English so it was very hard to communicate. We used sign language as best we could. Dudley, Missouri is rural. There are no Asian people. I think we were the first ones.

Our sponsors were very kind. We worked for them on their farm and they’d take us to church and shopping. I remember our first store was Wal-Mart. That was something different for us because back home, we make our own clothes. Now we go into the store and we see clothes are already made and it’s like how will they know it’s going to fit us? So that was a new concept. It was pretty amazing.

We were very poor in Vietnam. We didn’t have shoes. We had two changes of clothes that we alternated. We lived in a small house, dirt floor. The whole family slept on one bed. The kitchens were out in the back with three rocks and an open fire. It was a big adjustment to come here to the States.

We felt welcomed here. When we were in the refugee camp in Fort Chaffee and got sponsored, we got so excited. When we lined up to get food, we saved up the fruits from several meals to give to our sponsor when we met them. It was kind of funny because they own an orchard. When we gave them the fruit they said to look in the back of the van. They had boxes of fruit there for us. It was kind of funny that way.

Our sponsors live in Missouri. We went to Missouri and lived on their farm for two years in a mobile home that they had. We worked for them. They were building a new house so they lifted up their old house and brought it to where the mobile home was and they were going to let us live in it. But we weren’t there very long because my uncle, my mom’s brother, ended up in Michigan and somehow found us. He came to Missouri and brought us back to Michigan with him.

From ’75 to ’77 we were in Missouri, then from ’77 on we were in Michigan. Our family lived there for a long time. After high school I moved to Florida. I went to nursing school there and worked. After I graduated from nursing school, I came to California.

I always wanted to be in health care. I always took care of my siblings when they were sick at home. I know my parents dreamt of me being a doctor, but we couldn’t afford it. Nursing was the closest thing that I could do to get into healthcare.

Over time I became a specialized nurse. When I graduated from nursing school, I was already working at a children’s hospital. After a year of regular nursing I went into critical care. Then after ten years in critical care I moved into the operating room. I got special training to work in the operating room. After a year as a general operating room nurse I got recruited to work in cardiac surgery. This requires a lot of skill. I came here to Lucille Packard Children’s Hospital at Stanford in 2011. A couple of years later I was promoted to Service Lead after the nurse who was in charge of the cardiac operating room nursing service retired.

I have been back to Vietnam three times. The first couple of times I went just to visit family. The third time I went back for three weeks and traveled throughout the country to do mission work. I also went twice to Guatemala and to the Philippines to do medical missions. Once I became a nurse, I went back to help them.

As an immigrant I am so grateful to have been allowed into the States and given the opportunity to go to school. I took advantage of that to learn and work hard. I’ve always worked a fulltime job or two jobs, just because I’m able to. There’s so much opportunity here that I didn’t have back home.

It’s sad to see that immigrants are not welcome here anymore. It’s very difficult for refugees to come in now. I would tell people who are against immigration and against refugees that I think everybody should have an opportunity to come here. But I can see how they might be against this. Not everybody takes the opportunity to be a productive citizen. Immigrants who come here  and work hard make a difference. I would say that they have to look at each individual situation, not just make an across-the-board limitation on the number of people allowed.

Our country is so diverse, especially here in California and that’s what makes it great. People bring a lot of ideas and much to share from their country. What they’ve learned in their countries they can share here and make it better for all of us.

For example, people are willing to come here to do manual labor at jobs that American people don’t want. Being here is better than where they come from, even doing manual labor, and they’re willing to do it. They should be able to come because we need them and they need us. It’s a win-win situation.

A great thing about America is that it has laws to keep everyone safe. I find that hard in Vietnam, one example being the traffic. Crossing the street is terrifying. Here you know if the light is red, you have to stop, and it’s safe for you to walk when it says to walk. Where we come from, I don’t know when it’s safe. That kind of thing.

There are more educational and then job opportunities here. Children here can go to through high school for free. In Vietnam we didn’t have that.

But largely America’s greatness is its diversity. People here from all over makes it interesting. You get to learn their cultures and the differences among them.

My hope is that America will open the door to all that want to come here, but with some screening. Usually, it’s poor people who need help more than people who can afford to pay to immigrate anywhere. They need the opportunity to come here to get an education and to find work.