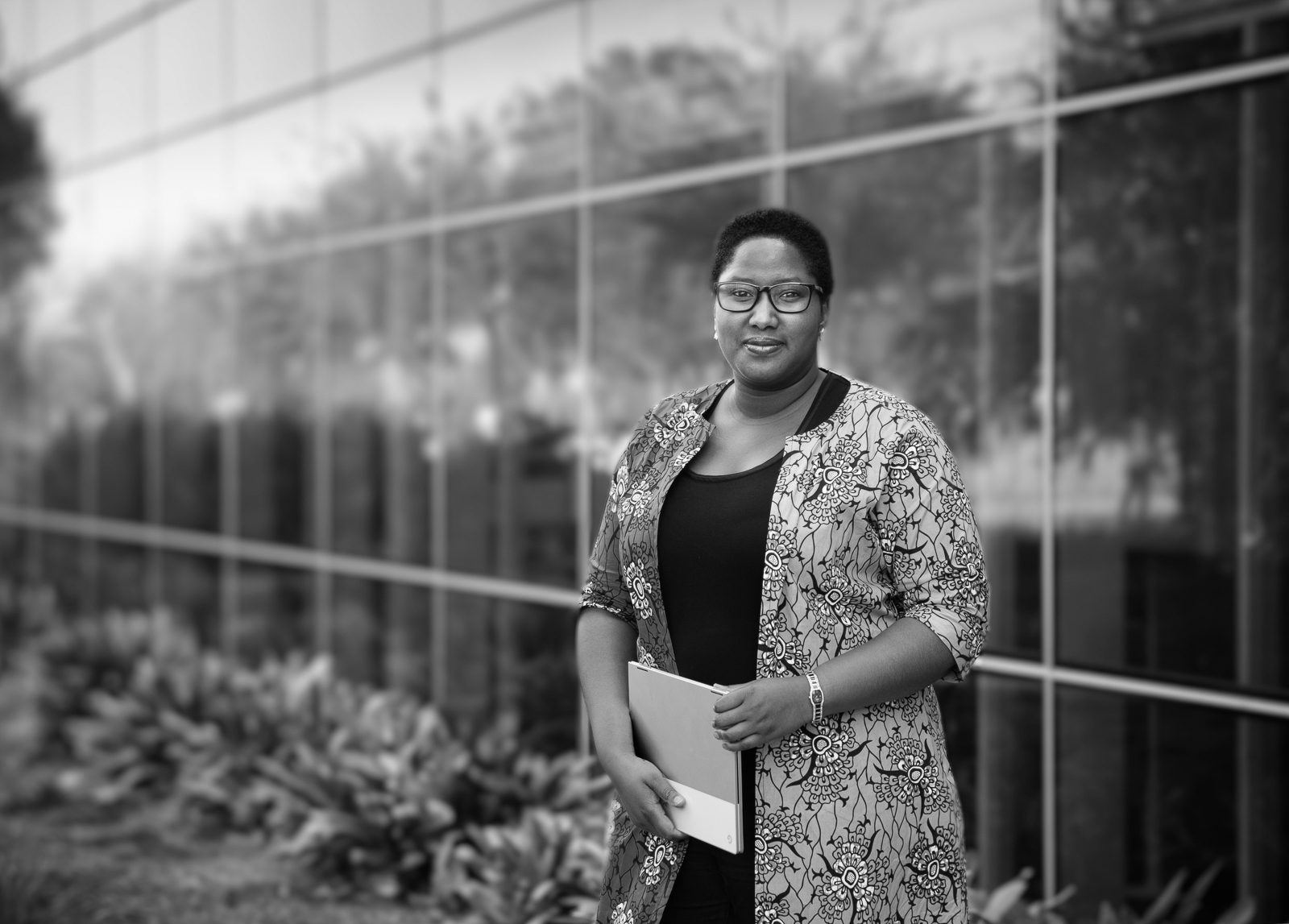 My name is Marie Christin Anthony. I am from Germany and Nigeria.

In 1985, my twin sister and I were born in Germany to a single mom. We moved back to Nigeria in early 1987. I grew up in northern Nigeria in a town called Kaduna. There, I went to what we call nursery school — which is like kindergarten here — up through high school. When I finished high school at the age of 15, I moved back to Germany in 2001 to study. I lived successfully in there for 14 years and found home in Germany as well. I was able to become a German citizen because I was born there and I’d spent over ten years there.

Three years ago, I moved to America for love. I’ve been living here for almost four years ago, since February of 2015. But I have family still in Nigeria, it’s especially hard because my mom still lives in Nigeria and my twin sister used to live in Germany and now she’s in Scotland. It’s just so far away from everyone.

With that said, I also found greater opportunity here. I was able to move with my company, so my transition here was smooth. The job had better opportunities, and I was also able to start a side business as well after I moved. The thing I love about America is what I’ve learned from being here, to chase your passion. To believe in your dreams and actually make it reality. It’s such a contrast coming from Germany where you work a job for 20 years and then retire. In Germany, you always go for safety and it doesn’t feel safe to put yourself out there. In America there is a strong spirit of entrepreneurship. People have helped me to not be afraid to take a risk and see what happens. That was what encouraged me to start my blog where write about my journey to the U.S.

I had always been doing the same thing. I studied business information systems, which is mix of computer science and business. I decided not to be a programmer, but to be a project manager. I started working at Google almost three months ago in the hardware arm.

It’s interesting because the U.S. was never on my list of countries I planned to move to. That changed because I was in a committed relationship that had lasted so many years. But he was not going to move to Germany because it’s cold and he would have had to learn German, so his hurdle was bigger than mine. I spoke English from growing up in Nigeria and my job would allow me to move here, so it was an easier transition for me.

I came here before Trump was elected. I have never ever been in a situation where the election of a president influenced my life directly.  In mid-2017 I was planning to change my job, but I had come with an L-1 visa. That’s when you’re tied to the employer. It’s a visa for a transfer from one country to the other, but within the same company. But then that ties you to the company. If you want to leave, you have to look for another company who will sponsor you with an H-1B. The job market was good and I was in California. A program manager, I’ll definitely get a job. The problem was companies could not sponsor so many people any longer, so we thought the H-1B visa is going to hard to get. With the rumors already going around about changes in immigration policy, we decided to get married. We’d been together about nine years, so we decided to just get married because we thought a green card would be easier than H-1B.

But that is not exactly true, now the process time for green cards is three time as long as it used to be. They do not inform you why they rejected you. In February, I submitted an application for my green card and had to wait for an EAD, an Employment Authorization Document. This allows you to change jobs while they’re processing your green card. It typically comes in in 90 days.

I called at the 90-day mark and I was told that now it’s five to seven months. I had been interviewing for jobs that were offering me a position. I had lost two positions because I did not have my work authorization. From January to August, I was in limbo because I didn’t know when I would be able to start working .Never in my life or in my relocation journey was I unable to take an opportunity due to the barriers in immigration status. I never thought that Trump would have such an influence on me, but at that point it became very real.

And it sill is. I got the EAD almost after six months and I was able to take this job at Google. Now I have to figure out what’s next in my green card process. My status has been pending for three months. I got a letter that said they were ready to schedule an interview. But for three months, there has been no update. In Germany, that would have been totally unacceptable. They would never leave me in limbo and they would keep me updated on the process.

This has caused a lot of stress for a lot of reasons. I cannot yet travel. Knock on wood that nothing happens where I have to go Europe because I have a problem coming back because my travel authorization status isn’t clear. Until I have the interview, I wouldn’t know. And I have direct comparison to where I was in Germany where I also had to go for visas every year or every six months. I’m grateful that everything is working out, that I have a job and I have the basic needs in life, but I feel the restrictions.

When people talk about immigrants they always think about the ones that are walking from Mexico over the border and all, but there are also the legal immigrants who have jobs and pay a lot of taxes. I’m not exempt from taxes and I’m willing to pay because I’m willing to contribute to whatever society I live in. It’s good that we are having conversations about immigrants, but can we look at the whole spectrum of immigrants? As an immigrant, you have to put in more effort and work to prove yourself. You sit in a lot of rooms where people will not listen to you because they don’t think you know what you’re talking about and you have to prove yourself.

I hope that Americans become more aware. There’s a level of ignorance that America has been allowed to have because everything has been going so great. Like when I came here, every time people talk about African countries they were talked about how the African countries don’t have democracies and all the things they didn’t have. Can America now confidently say that they have a democracy? They say African countries don’t have checks and balances. Can America now say they have checks and balances?  America has to be more aware that those countries that they look down on are closer than they think. America has to be more aware of what is going on outside America as well as what is going on within America. That is my hope for America.

I don’t understand how another immigrant being here has taken away from something that people think is rightfully theirs. Do you want to work on a watermelon farm? I don’t, and I am an immigrant. I don’t want to pick strawberries. They’re helping us. Do you want to have the ability to go for brunch in the Bay Area? Look around. No matter what the restaurant is called and no matter who the owner is, look into the kitchen and you will see immigrants — especially Mexicans — cooking. It was the same thing in Germany. In Germany, it was resentment against the Polish workers before Poland joined the EU.

If we empty America out of all the immigrants, how are we going to cover that gap? Do we have enough people to fill those jobs? No, because everybody is working in other things. Without immigrants, we would not have enough of a workforce. Since there is no way to fill that gap, let people who want to come here work and live. Let them live.