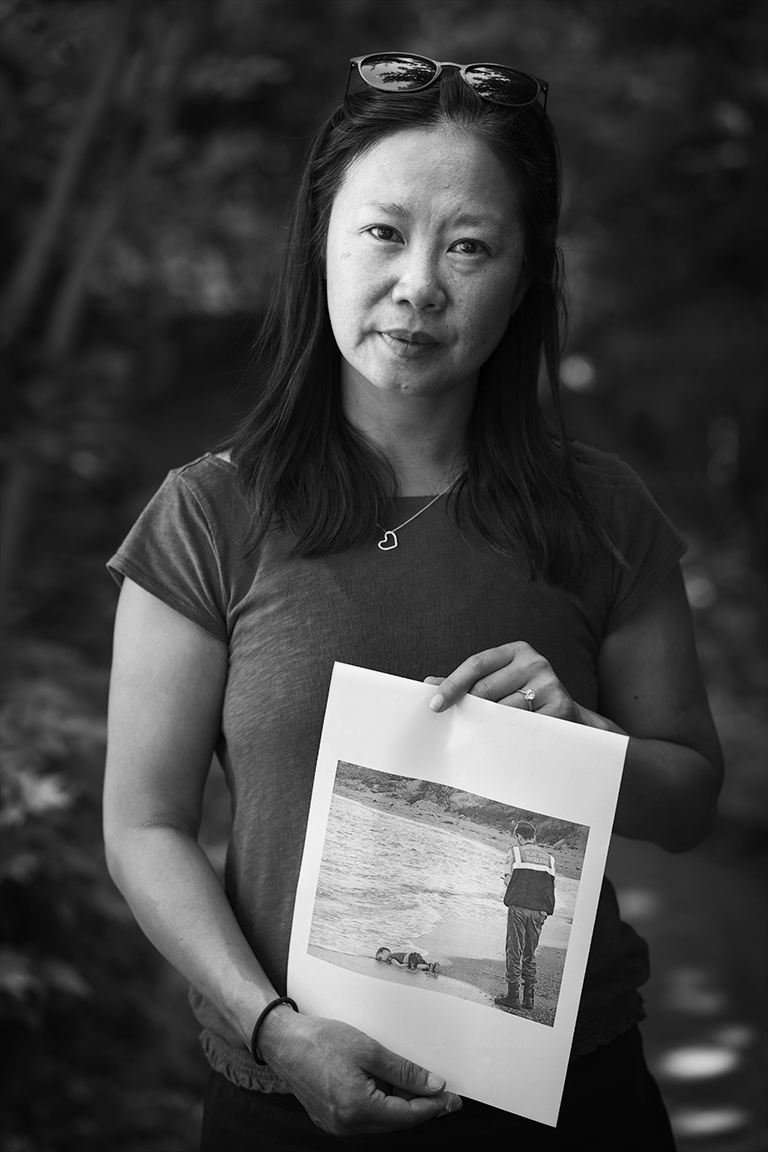 My name is Maria Tran. Though my last name is Tran, I am ethnically Chinese.  I was a Vietnamese Boat Refugee.

One of the things that people are not very aware of, especially, Americans, is that after the American and Vietnam War, one of the bloodiest border conflicts occurred in the late 70s, early 80s between Vietnam and China. Ethnic Chinese people who were living in Vietnam, many of whom for generations, were persecuted as retribution for the Vietnamese soldiers killed by the Chinese during the border conflict. Businesses owned by ethnic Chinese were shut down, set on fire, families were harassed. There were a number of laws leading up to the actual violence that broke out that made it harder and harder for Chinese people to exist and keep their culture.

For instance, my last name is Tran, spelled T-R-A-N. That’s a Vietnamese spelling, the closest Vietnamese transliteration of my Chinese name which in Cantonese would be Chan, in Mandarin would be Chen. The reason for that is because there were a number of laws that prohibited having Chinese surnames. And so by law, my family had to change their name. It’s the same kind of nationalist rhetoric that you see happening over and over again when nationalist parties take over and blame immigrants for problems and enact policies against them.

My parents, like a lot of other people during that time period did the only thing that they could, which was sell everything that they owned and secretly arrange to leave on a boat. Looking back at that, I’m always incredulous as to how they came about making such a grave decision. There were no cell phones, newspapers weren’t even covering it at the time. People just left their lives in the middle of the night to an uncertain future. You couldn’t tell anyone because you’re afraid that they would tell the authorities and you would get arrested. The people who left were not able to even write a letter or give you a phone call to let you know that they were safe, where they were and which route you should take. It’s not like today where you can go on Facebook and find out or go on Whatsapp to communicate.

My parents walked away from everything they k I was the only 3 at the time. Leading up to us leaving, they were plagued with the decision of whether or not to take me or leave me with my grandparents.  My mom said I was so clingy leaving up to them leaving, like I must have known something was going on. Because I was so clingy she couldn’t leave me. And thank goodness for that because I’ve known other families where they’ve left their young children and they did not get reunited until decades later. My uncle left without his 3 daughters and they didn’t make it to the states until 15 years later.

My parents and I snuck out in the middle of the night, got on a fisherman’s boat along with other families.  We ended up floating in the South China Sea for days until we were picked up by the Coast Guard off the coast of Hong Kong. Thankfully, we were up north and headed that direction because there were just terrible stories of people who were heading towards Thailand because there were more pirates that route.

We lived in a refugee camp for months, less than a year when we were approved to immigrate to the US.   At that point in time, the US along with a number of Western countries, agreed to resettle refugees. The US ended up taking half a million of what was referred to as “Vietnamese Boat People” during that time period. And we were one of the lucky ones.   We were selected by the Stutzmans, a Mennonite family up in Oregon.  The Stutzmans were opposed to the war and they talked about it as an extended family and decided that the most Christian thing that they can do was to sponsor a family.

The rest of the story is very much like any other poor immigrant family who came to the States. My parents worked hard laboring in sweatshops and restaurants.  I did well in school, graduated from UC Berkeley and had a great career in the tech industry.  I didn’t think much about my refugee past until September 2nd of 2015. That’s when I saw that photo of Alan Kurdi, the 3 year old little boy whose body was washed up in a beach in Turkey.

At the time, newspaper articles reporting about Syrian refugees had headlines about fighting age young men coming into Europe. The photos looked scary, but seeing that picture of Alan Kurdi made me realize that there’s more to the story. That there were families fleeing and that their stories were probably very similar to my family stories and everyone else that I knew growing up.

I realized that people don’t know who refugees are. And that word sounds foreign and scary. It sounds like a bunch of really poor people. It sounds like how the administration is painting it out—illegal people trying to come into our country and cause havoc. I started to share my story. I realized I had to.  Tt was phenomenal because while this past was part of me in so many ways, it really wasn’t a part of me. It was not the successful product manager at Facebook that people saw.. It was not an identity that people, even my friends, associated with me.

For my first post, I’m posted a picture of myself at three years old in a refugee camp. It shocked my friends and co-workers because they had no idea I was a refugee. It was the first time they felt a connection to a refugee.  It humanized that word for them and anchored it to a real person that they interacted with, cared for.

The whole trip opened my eyes. We spent time in Turkey where people were arranging trips to cross the seas to Greece. We then went to Lesvos which was the Grek island closest to Turkey.  We paid 12 euros each to ride a ferry boat that only had three other people on it, when thousands of people were paying 1,200 euros each to get crammed into tiny little lifeboats with fake life jackets that didn’t float.  Boats where the engines would fail, people got trampled, boats that sank and people drowned. It was a surreal situation. Because we had passports, we were able to pay 12 euros and sit in this safe, comfortable ferry for the one and a half hour.  And people who were looking for safety were risking their lives.

We went up north on Lesvos where the boats were coming in and within 15 minutes of me being there I saw my first boat. After that moment, the floodgates open and there were 20 boats after that.   There were about 50 to 60 people on each boat.I’d never seen anything like that. On my second trip, I stayed there long enough to really process what I was going through and the larger decision that I needed to make in my life which is do I stay in Lesvos and give up my life and help people versus, do I go home and raise money to help the grassroots groups that I worked with. I realized that I would have more impact by going back home and telling the story and raising money so that I can continue to fund the people who can be there. That’s how Sea of Solidarity started. In the past 3 years, we have raised money to fund grassroots projects in Greece and Turkey.

Europe was going to let the thing fester and let the conditions stay bad to discourage people from coming. It’s very much the same kind of tactics that you’re seeing at our borders today. In Europe, they’re letting people live in tents, on shipping pallets and dirt. People have lived through three winters like this and every winter people have died on Lesvo.  Some people have committed suicide. There’s one guy who set himself on fire. We were so naïve when we started SOS because none of us thought that two and a half years later, we would still have to provide grassroots support. We expected governments and large NGOs to take over.

Across the islands of Greece, there are over 17,000 people — this number is as of three days ago — trapped on these islands in these makeshift camps. And on Lesvos alone, which is this tiny little island, there are over 9,000 people trapped. We’re still helping. Every single month we’re still supporting a number of grassroots projects. We support three food projects. We support a distribution center that handles and takes in all the donations and then takes orders for what people need, both directly from refugees as well as from other NGOs across the island. We support two schools in Izmir that started by a Salvatorian Canadian. We’re still very involved two and a half years later and unfortunately, there’s no end in sight.

If I have the occasion to meet people who have negative attitudes towards immigrants, I would appeal to telling them my story, focusing on aspects that one they would appreciate and empathize with. My parents, even though they came with very little education, are small business owners who are employing Americans.

I have done well. The thing that we’re able to do as technologists, especially as someone in software, is amplify the amount of productivity that comes out of any single person. And so if you look at my technology contributions to this country and to industry and if we were to codify that, one of me made hundreds and thousands of Americans much more productive. I have six patents that have been filed and one that have been granted. All of those things have added value, added concrete financial value to this country.

It’s the cognitive diversity that we have in this country where we attract smart people, where the promise of opportunity allows people to strive and do their best that makes it a bed of innovation and a great country. That’s what America is about. It may look a little strange to some people because America is no longer white, but that strangeness is not a bad thing. And that strangeness is what has given us the productivity. Look at California, look at Silicon Valley, we are the most diverse, both cognitively as well as racially, state in the country and look what we have done.