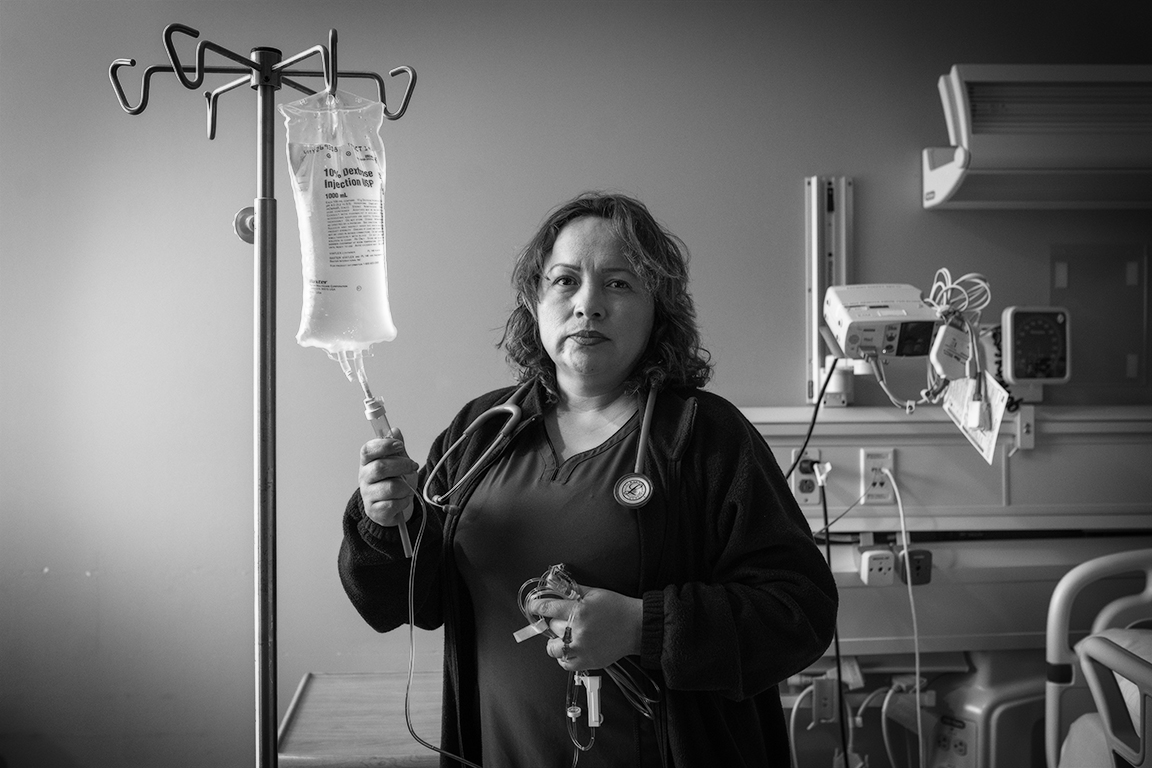 My name is Maria Guadalupe Mendoza Sanchez. I’m a registered oncology nurse. I work at Highland Hospital in Oakland, California.  I have been fighting deportation for nearly 18 years but it finally caught up with me in May 2018 and my husband and I were deported to Mexico having to leave my 4 children behind.

I grew up in a small Mexican village 2 hours north of Mexico City. Life was tough so I left home when I was 14 years old, working first in Mexico City than Tijuana. I came to the US hiking across the border to join a friend I knew from my village, Sanchez, who I eventually married.

In 2001 there was an opportunity through a program to get some sort of legal parole- called cancellation of removal.  I met this attorney who did tell me, “You’ve been here for this many years, ten years, and then you have a clean record, you pay your taxes, you help in the community.” At that point, two of my daughters have some learning disabilities and then he told me, “You do have what is necessary to apply for this type of program.”

I did want to fix my legal status in the United States, so I did go for it. The judge denied our case for the first time, but he told us that we did have the right to appeal. After that, we won the appeal but we had to continue to go back to court to make the case that we should not be deported. Because at this point, we’re talking about three American citizen children who have different types of disabilities and medical conditions.

Our case went on and on until 2011. In 2011, my son who was had heart problems had healed; my daughters with learning disabilities were doing better in school. As a parent, the most important thing was helping my kids to overcome their disabilities regardless of whether that would help me or not in court.

In 2011, the judge decided that there was not enough hardship, our kids were getting better, and he denied our case again. He told us we had 3 months to appeal or voluntarily leave the country. All these appeals take time and it was early 2013 when we had run out of appeals. Our attorney suggested we contact our Senator Dianne Feinstein. It was a long shot but we had nothing to lose.

At that point, I had not yet graduated from University (where I was getting my nursing degree) and I said, “Look, I already invested all this time, all this money and I’m not going to give up until I see that I tried the last resource I have available. And if it doesn’t work, at least, I’m going to leave knowing that I did try but it didn’t work, rather than wondering what would happen if I had tried.”

Senator Feinstein submitted a private bill so I was able to continue studying and working.

Then in 2013 when I was about to start the last semester of the nursing program, I received a letter from ICE as our last appeals were denied. We had to be at the immigration building in San Francisco with our luggage because we were going to be deported.

I went over to the immigration building with my husband, the attorneys, and with my letters from Senator Feinstein. The immigration officer did review the case and our stay of deportation was approved. In 2013, we got an approval for one-year stay of deportation that allows us to stay in the country for one more year. Within that time, I finished school, I passed my board exam and I became a registered oncology nurse. In 2014, we were granted another stay of deportation until 2015. Our work permit could be renewed and we could continue to legally work but every 3-6 months we had to check in with immigration.

We didn’t have any problem until 2016. But once President Trump became the president, I automatically knew that wasn’t good for us. Trump signed an executive order calling for deportations and that caught up to us in May 2017.

I was already working here at Highland Hospital as an oncology nurse. We did submit every single document they requested and Senator Feinstein was trying to help. The stay of deportation was approved, but only for three months and my husband and I were deported in August 2017.

It’s been a very rough road. It is very difficult because I did have my kids with the special needs. I have my son with a heart condition. I was a full-time student, I was working full-time first, as a certified nursing assistant, then as an oncology nurse, and I was raising my children.

At first, I was thinking to take my two little ones back to Mexico with me, but my youngest daughter has a lot of difficulties with school. Although they speak Spanish, they’re not proficient. So I knew that moving her from one country to another country would add to her learning disability. I decided that staying back with her sisters was going to be better even though I knew it was going to be very painful for all of us. For me, education is very important to succeed in life so I want my kids to be well educated and I will do everything it takes to provide for their needs.

It did not make any sense to deport us.  That’s why we went to the press because that was pretty much the last resource. I’m a nurse, I’m a giver, and I said, “If somehow by making my case public, I can make a difference in other people’s lives, I’ll do it. I’ll do it. I have nothing to lose and I will go for it.” That’s why we made our case public.

I did have a very positive response, a response that I never imagined I was going to have, starting from my co-workers and the Union and the people at work in Alameda Health System and from many politicians, including Senator Feinstein. I could never thank her enough for all that she has done to help us. Representative Barbara Lee and Oakland mayor Libby Schaaf were also very supportive.

When I left, I knew that coming back was going to be a long shot and I also knew that probably my better chances were to go to Canada or to go to another country because I was already exploring the possibility. I always thought my kids are in America. I went to school, I did all this, and I always thought this is not fair. We have to do something.

Mr. Baker, my immigration attorney told me, “There is a tiny possibility,” and it was around this time last year when the time to submit the H-1B applications for the lottery, he told me, “there’s a very, very small possibility here. If you find an employer willing to petition you, a hospital willing to petition you, pay all the expenses, we could submit the H-1B application and if you meet all the requirements, you may get accepted to enter the lottery. This is lottery so be aware.” He told me, “I don’t want you to be so hopeful because I don’t want you to end up more broken than you already are, but this is all we have.” I said, “If that’s all we have, I’ll go for it. I’m going to try and find someone to sponsor me.”  Fortunately the CEO for Alameda Health System, with the support of Senator Feinstein’s office, sponsored me.

During the lottery system, my name was selected. I was very lucky to be one of the almost 70,000 people selected.  Now we had to submit for the application to USCIS and hope that it will be approved. That’s where Senator Feinstein supported us very, very much.

Now I am back at Highland Hospital with a working visa. Once the three years are up, then I can apply for another three years. But we’re not sure whether this will be granted or not. I don’t have to enter a lottery, but I have to reapply prior to the expiration of those three years. The three years will expire in August of 2021 so we have to start submitting all the documents to reapply for the working visa. If they approve it, then I would have another three years. After the six years, under the current immigration laws, my employer, which is Alameda Health System, can petition me to become a resident. Hopefully, that happens and the law doesn’t change.

My husband is still in Mexico. Our family has undergone a significant amount of pain.  When we were there, we always talked about the fact that if at least, one of us will be with the kids, the other one will have a little bit more peace of mind because if we both are not with our children, you cannot imagine how horrible that is. I wasn’t able to sleep. I was in a major depression. I had to take medication for depression, medication for anxiety, medication to sleep and none of that was helping me.

I had this tremendous amount of support from my family members back home and from my friends here, they were always reaching out and making sure that I was fine. But nobody can understand the significant amount of pain you go through during a situation like this. As a mother, I was always panicking; I was in this state of anxiety constantly.

Many times, the idea of not being alive crossed my mind. Never tried to take my life, but I prayed to God that I didn’t want to wake up because the pain was so intense that it was like somebody is squishing my heart and will not let go at all times. It’s not like there was a pain that was there for a little while and then subsided, but there was a pain that was not subsiding and then it was horrible. If there’s something I can do to help other people not to go through that pain, I’ll do it by all means. There are lots of people that sympathize, but most don’t understand the pain of having to leave your children.

My hope for America is that we go back to being the country we were, like caring for one another, a bit more caring for one another. That all these shootings and hate attacks can stop. That immigrants get recognized for the hard work they put in and the contributions they add for this country. Because a lot of people think immigrants don’t pay taxes, but  the IRS assign a number for us to pay taxes even if we don’t have a valid social security number. We pay a lot of taxes and I have proof of that. I say that’s my way to contribute to the country and it’s okay. It’s fine. This is the country I live in. This is the place where I pretty much became who I am. This is home for me.