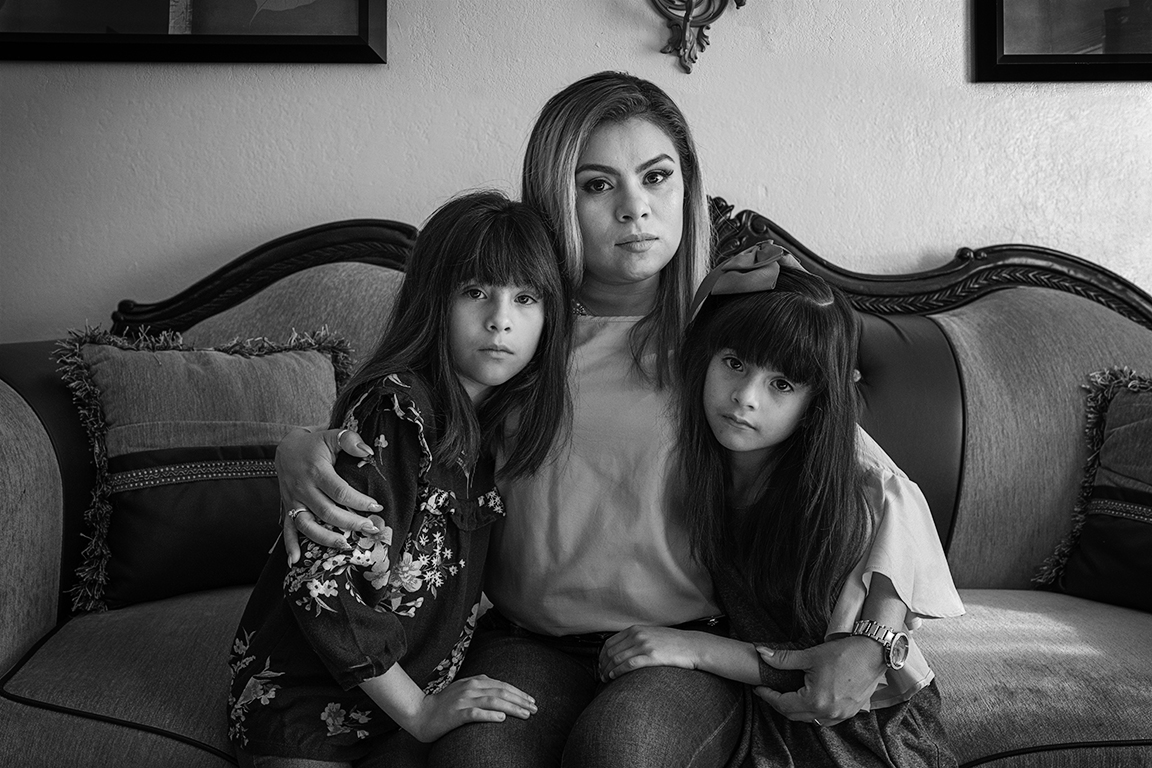 My name is Maria Maldonado.  I’m from Arteaga, Michoacán, Mexico and I came for political asylum.

I came because of the violence and the gangs in Mexico. They were searching for my brother, and because of him I became a target of the cartel and gangs. They would come looking for me, they would threaten me and my children, Jade and Kendra Violetta. I was afraid they would kill us. I was also afraid that when my daughters got older they would just be raped.

They met me when I was working in Arteaga. I was afraid they would rape me because one of the gang member was harassing me. As a woman, if you don’t give in to their demands they will take you by force. They rape you and then they kill you. I was afraid that that would happen to me. When I heard about the political asylum, I made the decision to come here.

It was very difficult to leave with my girls, but I got the strength from my daughters. I investigated first what the asylum entails. I just packed and asked for my siblings to support me in that. They sent me money and I bought a bus ticket and a plane ticket. I took my daughters with me, but I did still worried about the family I left behind. For now, they’re okay.

I got a ticket from Arteaga to Uruapan, Michoacán, and then I took a plane to Tijuana from Uruapan. I presented myself at the Tijuana border. I had never traveled by plane so that was a first for me. But I asked a lady who was very kind what I could do. She told me to stand in line because she was doing the same too. I followed her instructions. When I arrived in Tijuana by plane, I didn’t even know what to do. I can’t remember, but I was told to go to the point of entry to come into the U.S. It was at the San Ysidro border crossing.

I was very desperate with my two kids. I was told to stand in this one line and it was the wrong line. And they told me to go downstairs there was another line. Then I went to an immigration agent, I didn’t speak English. He asked me where my documents were to cross the border. I told him that I did not have documents on me, but that I was asking for political asylum. I just gave them my birth certificate and my daughters, and they told me to come in.

I didn’t think that anything would happen then. I didn’t know if they were going to send me back. They told me to come in and they searched me. Then they led me to a room to other people. They asked me if I had a family member here. I told them that I did. They told me that they were going to contact her and then they came to San Ysidro to get me. I was granted asylum.

That was in 2014.  The situation would be different now. But I do worry about the current immigration policies. I don’t want anyone to be against immigrants because it is difficult. Things are difficult for an immigrant person. Everybody deserve opportunities. Right now, I’m more at peace because I can apply for my green card. I sometimes worry that I won’t be granted one because of our government, but I have to be positive and hope that they will.

I love many things about America, but most of all that you can live in peace. If something happens, then the police is right there at any moment. There’s better education for my children. There are more opportunities in life. I most of all want my children go to school and to get ahead in life. I have a lot of dreams for my daughters. More than anything, I want them to not to have to live surrounded by violence. I want them to have a peaceful life.