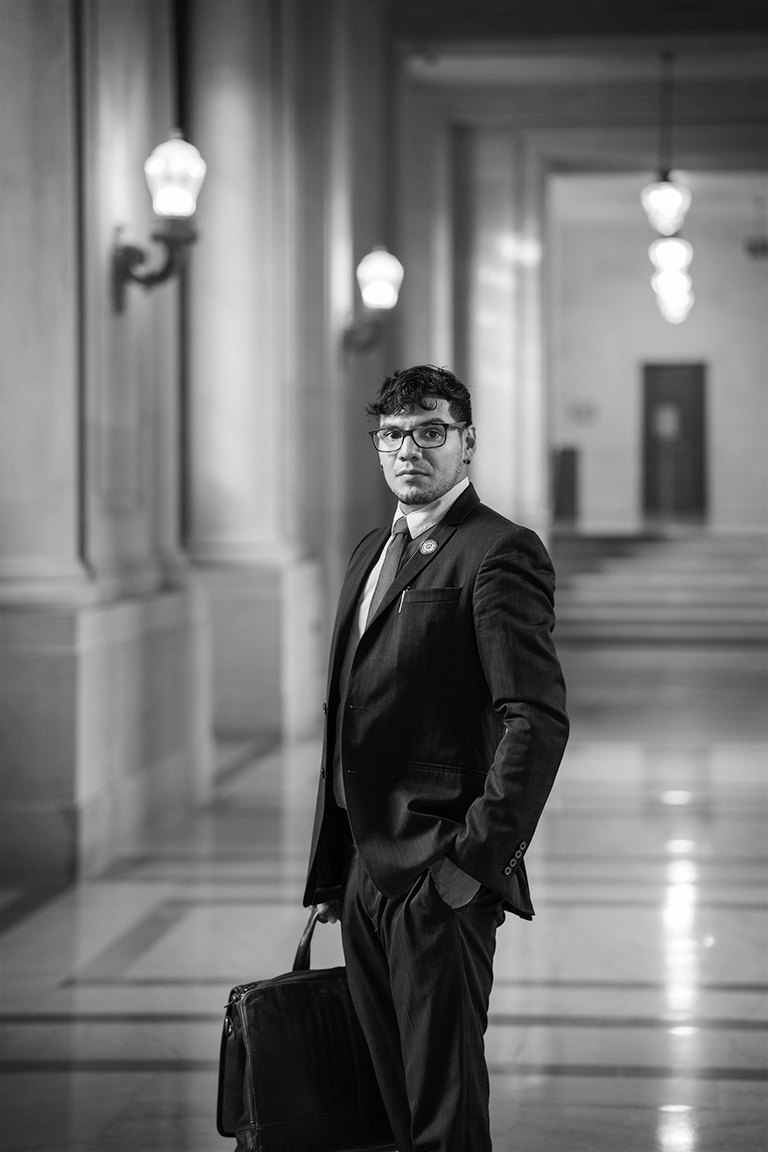 I am Krsna Avila and I am an attorney.

I was born in Acambaro, Guanajuato in Mexico, which is a very small little village. I came with my mom when I was four months old. My dad was already here so she was coming to join him so she had to get help to carry me. There were all these strangers who were taking turns just carrying me along the journey.

There are not a lot of opportunities in the village where they were from, so really their journey was for me. They wanted a better life for me. My parents didn’t graduate high school. They knew the school system was better here and there was a lot more opportunities so the decision to come here was all for me.

It was very hard growing up undocumented. Actually, I didn’t even know I was undocumented until I was 16 years old. My parents were placed in deportation and at that point, I remember my mom just pulled the car over one night and just started crying and she told me, “Look, I think there’s a chance that we’re going to get deported. We didn’t include you in this process because we’re afraid of the risk.” Luckily, they won their case and they got their green card.

Luckily, here in California there’s a law AB540 that allowed undocumented students to be treated the same as in state students so we didn’t have to worry about paying out of state tuitions, so that covered that. But in order to fund it, because we’re not eligible for financial aid, at least federally, I had to apply for scholarships. Back then, it was so hard and a lot of people did not know what an undocumented student was so it was a fairly new term, unlike today where you hear Dreamer. So I applied for scholarships and luckily, I found a few who were able to help me fund going to college

I graduated college in 2010, I was still undocumented, but by then I knew I wanted to go to law school because I just started meeting all these students who were like me, who were undocumented but had grown up here most of their life who didn’t know Mexico at all. I started meeting all these organizers and started getting more involved in trying to pass some comprehensive law that would help us. I started also seeing the effects that immigration law was specifically having on us. Beyond just being able to work, it’s an emotional toll and you feel like you don’t belong here, but yet this is where you grew up. That was my kind of passion for understanding immigration laws more.

Obviously, I couldn’t afford law school because I was still undocumented so when I graduated, I was just kind of getting help from anyone I could, volunteering in different legal organizations. Through that process, I started learning more about immigration law and found out that I had a legal route to citizenship. And so with the help of some attorneys, we were able to win my case in 2013.

When I got my status, I was actually afraid of coming out as documented.  It took me about four months to actually tell my friends that I got a green card because to this day, a lot of my friends don’t have the privilege that I have. I think there are very emotional and psychological aspects  that didn’t get deleted just because I got status. To this day, whenever I see an officer, for example, I still keep thinking that it’s ICE. Because 23 years of being undocumented is still very much part of my identity. I’m hopeful that we can get to a future where immigration status works just easier for folks to come here.

To be honest, when Donald Trump was elected, I didn’t think that he was going to be as dangerous as he was, especially with the DACA and undocumented students. I thought that he was going to sympathize with them and he would say things like, “I will look out for the Dreamers, I love the Dreamers.” When he got rid of DACA, that was when I was like this guy is different, this guy is dangerous. He’s unpredictable and he will go after anyone. Every single day it’s something. People hear about like separation of families at the border, the big stuff, but every single day there were new policies that had big effects on people that most people are not aware of.

For example, I was reading a new memo, which basically said that if someone was applying for a green card under this new policy if you get denied and they think that you’re a threat, they will go after you. Before if you got denied, they’ll just simply deny you and that’s it, you’ll go about your business. But now that’s so dangerous because it’s going to cause a lot of fear in the community. People aren’t going to apply if they’re eligible for a green card; they’re going to be too scared to apply.

They are going after people who already have citizenship. It’s just so absurd. Their point is really to scare immigrants in any way possible. It’s not just immigrants who are struggling, there are also huge populations who are in rural America, like in Ithaca, NY for example. Surrounding Ithaca I saw a lot of people who are in poverty, who didn’t have access to education. I have been thinking a lot about this. It’s not a zero-some game. I think we’re here to help everyone and immigrants aren’t the reason why other folks are struggling.

I would tell those folks to listen and to really get to know immigrants and to relieve their fear because immigrants do not mean any harm. The idea that immigrants are criminals and rapists, is just simply not true. Yes, there might be some people who commit those atrocious crimes, but the general average immigrant is here to just try to support this country. They’re not here to reap the benefits, they also want to contribute and be a part of this country.