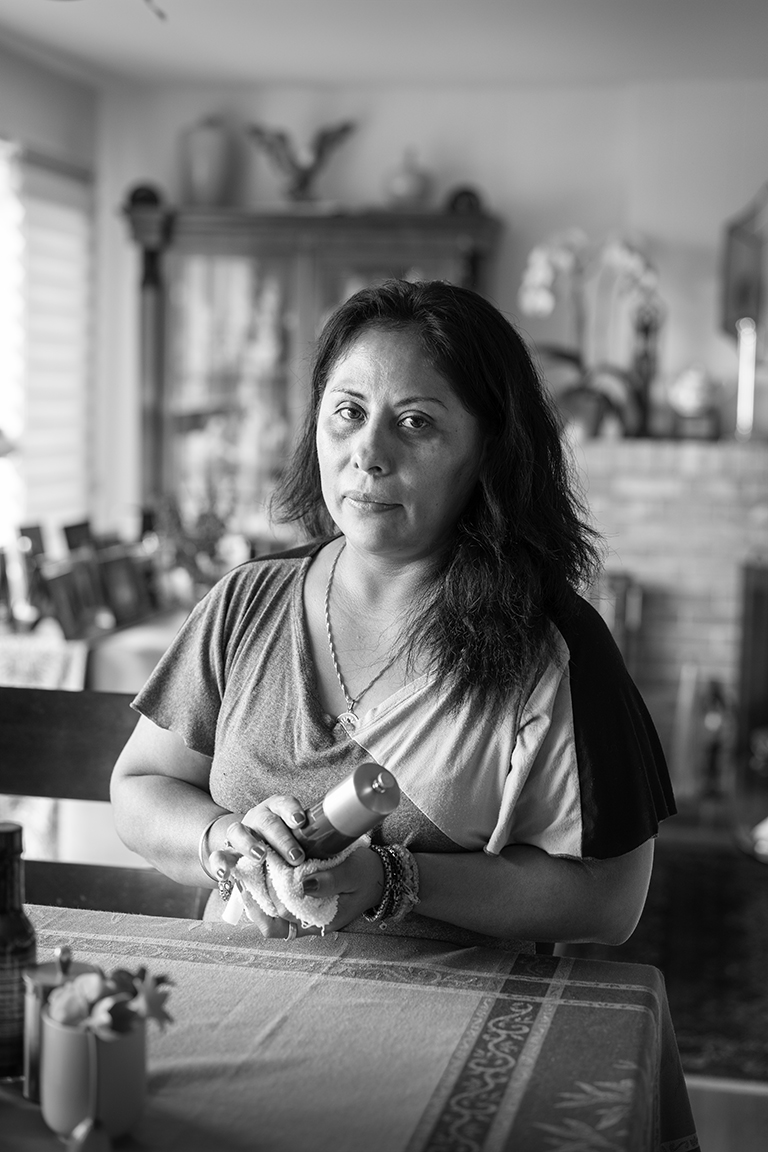 My name is Jenny Barragan Mora. I’m from Mexico, from the city of Oaxaca. I arrived just like everyone else arrives.

I was in university, and then I moved when I got married because my husband was already living here. When I arrived here, it was hard to adjust to the language. I had a different kind of life. I first started doing childcare for people, and then I moved into cleaning houses. By the time I was cleaning houses, my daughter was born. Then, ten years ago, my son was born.

I got divorced when my son was two years old. When I got divorced, the process for my status ended. I had an immigration lawyer when I was married, but then my husband had cheated on me with another woman. At that time, I didn’t know how it would impact my status. My lawyer said to wait, to not get a divorce yet. But he cheated on me, so I left. I had a permit to work here, but the immigration process was halted.

Two years later, I met someone When I was with him, I learned what domestic violence was. It started with verbal abuse, then he pushed me, and then he began hitting me. We lived together for four years before I went to the police.

Mujeres Unidas y Activas (MUA), a grassroots organization of Latina immigrant women, offered to help me. With MUA assistance, I began the process of fighting my partner in court and gathering proof. He only hit me or abused me when my kids were not there. But when my daughter was 16, she saw bruises on my arms and she talked to the social worker at her high school. The social worker asked me if I was being hit, but I told her no because I was scared. My partner threatened me, “You don’t have papers. If you accuse me, I will have you deported. I will make your kids end up in foster care here without you.”

And that’s when I got really scared, I was stuck without any way out. It got to a point where he hit me so hard that I had to go to the hospital. That’s when I finally went to the police. They put me in touch with the House of Mothers, Casa de las Madres. Casa de las Madres is a shelter for women. When you go to the officials, they will bring you there if you don’t want to go home.

Before I went through this, I didn’t know my rights especially in the criminal justice system. I really didn’t want to go to the police. Whenever I saw a policeman, I would always cross the street and go the other way. I had a lot of fear of the police because I thought they might have the power to also act as ICE. I know that the police sometimes do bad things, but I do feel blessed because when I have interacted with the police they have always treated me well.

I was also desperate when I called the police. I would do it again, if I was experiencing that level of abuse. I realized he could have killed me. Even if denouncing my partner and going to the police would lead to my deportation, at least I would be alive in my country and I could bring my children with me. I wouldn’t be dead here in this country.

MUA supported me during this five-year struggle to charge this man of domestic abuse. I received counseling and therapy with MUA. It wasn’t until 2016 that MUA connected me with an immigration lawyer. Because I was a victim, there was a possibility to reopen my case.

I’m not afraid of returning, but I do love this country. I’ve always worked so hard, I’ve never been dependent on the state. All of my employers really value my work. I think of my current client who is 98 years old, and the importance of my work for her. When I first started working for her, I was cleaning. But as soon as she wasn’t able to drive herself, I was able to get a license and be a driver for her. My tasks range from taking care of her needs to going shopping with her to cleaning. She has diabetes now, so I cook for the whole week and keep everything in the fridge. She’s a wonderful client, and just an incredible person.

She encouraged me to spend more time working for MUA when I was approached by the coordinator of the domestic violence program at MUA to work alongside her as an intern. I had participated in all the workshops that MUA offered about empowerment, and even been asked to lead them. At first I was hesitant because I worried I would have to relive everything that I went through. But my daughter convinced me to go for it and supported me through the application process. So, MUA has become my second home. I’ve been able to support people who have also experienced domestic violence. I act now as a counselor and accompany people in their cases. I go with people to the hospital, to court, or to the offices for child support and do police reports.

The reality is that I have a deep gratitude for this country. This is the country of my children and I would love to stay. I have dreams and aspirations for my children as well, to stay here and become professionals because this is their home. This country has given me so much. I’ve been here for 24 years; I’ve learned so much and I’ve also suffered here.