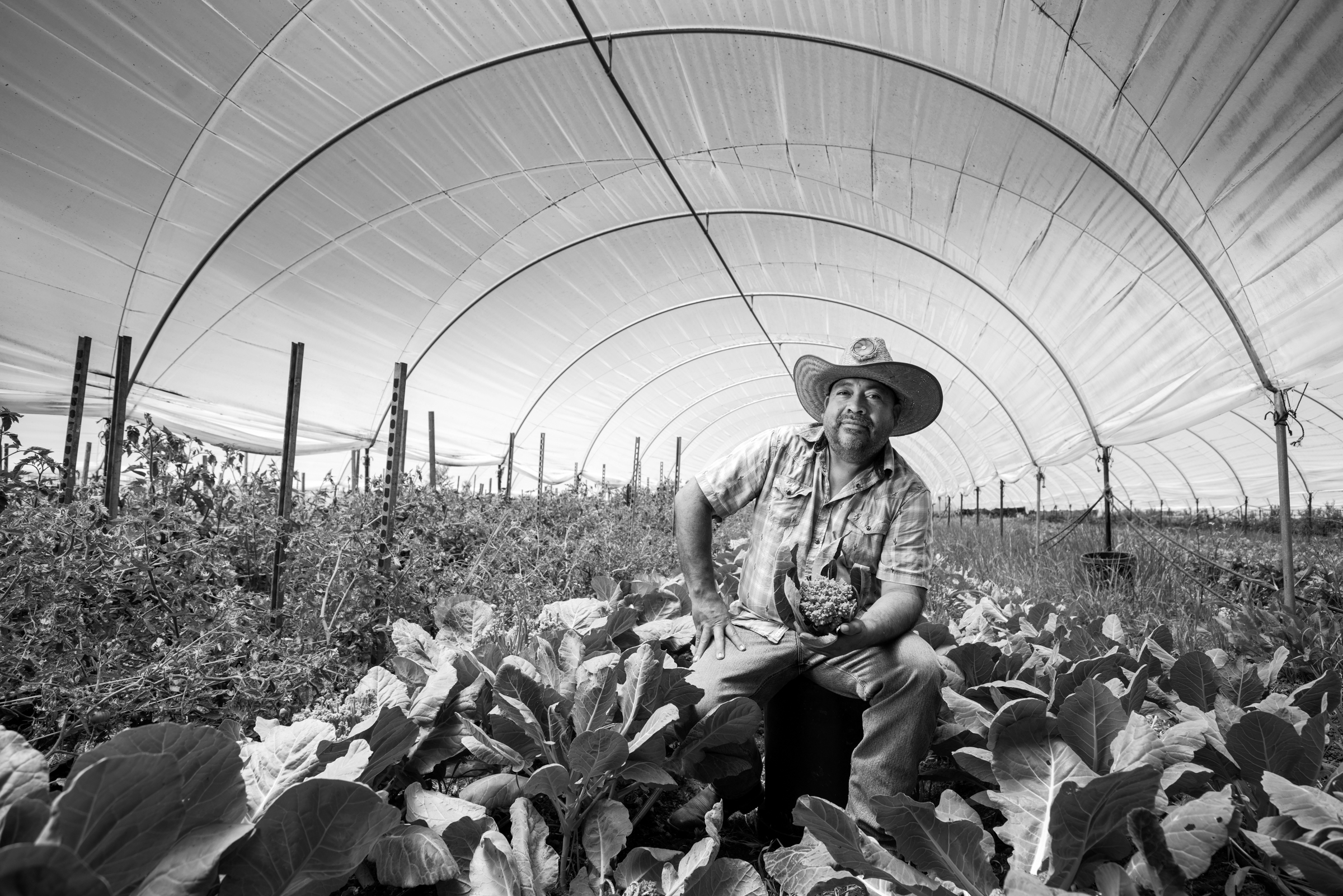 My name is Javier Zamora. I was born and raised in Michoacán, Mexico. I am a strawberry farmer. I come from a farming family in Michoacán. My father was a farmer. He worked for an American company that went there to grow melons and pickling cucumbers to be shipped to America. This was 45 years ago.

I came to the States in the mid-80s when I was 20 years old. I’m 54 now. I landed in LA where I had some siblings. There was absolutely no farming there so I worked in the restaurant industry as a dishwasher. After about a year and a half I went to work for a high-end nightclub in Redondo Beach. I started by cleaning the place, doing the janitorial work during the day. After a while the manager asked me to help out at nighttime when the show was on. I washed the glasses as a bar boy. After five years I ended up as bar manager. This was in the late 80s and early 90s. I started understanding and learning the language and learning about America. I was Mexican. America was a whole different world to me.

Next I went to work for Golf Management Company, American Golf. I ended up being a food and beverages director, regionally, for several golf courses. I learned a lot, like how to do banquets, weddings and all kinds of events.
In 2004, our life was good. We had cars; we had a couple of properties. The housing crisis then hit us. I had taken some money out from our house to buy a couple of investment properties. It all went to hell. We ended up losing everything. My wife had a relative in Tracy who suggested that we move out there. We rented an apartment there with my two daughters. I had so much anxiety and depression but I said “I’m not going to give up.”

I went and got my GED. I was 43. One of my instructors, Mr. Williams, encouraged me to go on to college. I went to San Joaquin Delta College in Stockton. When I got there and started touching soil and learning soil science it was the easiest thing for me. I didn’t know I was college material. I started doing really well. I was working at nighttime, caring for an elderly lady to make ends meet and I got some student loans. I was able to pay the rent. I studied landscape design, but that was not what I wanted. I wanted to do food production. An opening in Watsonville for fresh-cut flower grower came along and I went there in 2011. I studied organic farming at Cabrio College. This was the easiest thing for me. That’s how we grew things in Mexico. We didn’t call it organic but it is. One of my teachers there told me about a nonprofit in Salinas that would help me get a business started. That’s ALBA.

I got into the ALBA program and started to figure out the resources available. Then a property with an acre and a half and a trailer came available up on the hill. That’s where I started my company, JSM Organics. In 2012, I got certified organic. From there, my kids and my wife on Fridays would come in from Tracy, they would go back Sunday evening. I planted 2,000 strawberry crowns, 2,000 plants. That’s like half an acre. With no marketing, nothing, I didn’t know what I was going to do. All I knew is that I wanted to grow and sell food. I started growing different things.

In 2012, I got two acres from ALBA. I finished the program, I leased two more acres and then the following year, I got three more acres, which I still have. Once I got the two acres, I hired one person, and then I started hiring more people. The following year I got 20 acres, the fourth year, I got 27 acres. I developed a really good relationship with my customers. I would go to different conferences and different seminars and keep educating myself and networking with people, finding buyers. But from the very beginning, I knew I wanted to have my own label. So as soon as I had money, I had my label made.

In 2016, the 200-acre Triple M Ranch became available. I didn’t think I was going to be able to buy it, but the FSA lent me $300,000 with very little interest. FSA is the USDA Farm Service Agency that arranges small loans for farmers.

The Triple M Ranch has 80 acres of farming land and 120 acres dedicated to conservation. Right now, we have about 25 employees, but during the season, we go up to 60. In total I farm a little over 100 acres. Fifty percent is strawberries, about 25 percent will be cranberries, raspberries, blackberries, and then maybe 15 percent veggies: green beans, winter squash, summer squash, a little bit of kale, then the other 10 percent flowers. All certified organic.

This business has grown because of my workers. There’s very little I can do alone. Even when I had just an acre and a half, it was really hard for me to get things done. Now, these days, the bigger boys are doing some of the things that I’ve always done. Before the recent issues with immigration there were a lot of people available to hire to plant and harvest what we need, the food we need. Now there are just not enough people to do this work.

This has gotten really bad in the last three years. It is a big issue. Even big companies like Dole have stopped growing strawberries in the area. Years ago, you had people coming in from Mexico in March and April to work, and returning to Mexico in November.

In those days this flow of seasonal workers across the border was easy. When I came to this country it cost $250 to get help to cross the border. Right now, it is $15,000 to $20,000. Who is going to be able to come across the border to work? If you had such money why would you want to come?

It’s very difficult now. There’s the H2A program, but this is not enough and is really costly. This program enables people from Mexico or other countries to come here and work during the season, but the employer has to house them. I don’t have a problem if I had the housing. In fact, that’s something I want to do in the future, provide housing for my employees. But there’s not enough housing for the people who are here.

The problems of inflexible regulation, finding enough labor, finding land to buy and getting access to financing are making it really difficult for a small grower to stay in business.

Something that I try to do is to show the end consumer our business. It’s important that people know where the food they find in the supermarkets comes from and the struggles small farmers must overcome to produce it.

To be able to go from seed or crown to a box of strawberries, you need a lot of brains. You have to educate yourself. The notion of highly skilled immigration, it is bullshit because we have to be very highly skilled to produce the food that our society needs.

My business has grown and it keeps growing every year. This year, it will stop. There will be no more expansion of the business, even though there’s a big need for me to continue the growth. But what am I going to do? Let’s say willy-nilly come over and he goes, “Javier, we have 100 acres available for you. I want you to farm them.” How am I going to farm them? This kind of farming is shrinking because there are not enough people to do it – it has to be done by hand.

My hope for this country is that once we get through this period of political instability we see the reality that a functioning society needs different kinds of people. We need different skill sets. We need people from different backgrounds to benefit the society.

I’m a US citizen. I went through the process. When I became a farmer I got my work permit, then I became a resident, and then as soon as I was able I became a US citizen. I’ve been a US citizen for many years. But I also have my Mexican citizenship. I wasn’t born here, but I’m as American as it comes. We may look different but we’re just different individuals. That doesn’t make you any better or worse than me. We all poop, we all eat. As immigrants we have our problems here. Every opportunity that I have to chat with people, I find that my story helps to ease these problems.

I am a really blessed individual because I was able to understand the American culture and make my way here. And I’m blessed to not ever forget where I come from. My Latino roots were established well and I’m really proud of them, but I’m also really proud of what this society has provided to me. We can enhance things and help people understand what’s needed to succeed here. I’m going to continue trying to do that by helping immigrant kids that feel hopeless sometimes.

For me, it’s beautiful now, but it hasn’t always been that way. That’s what life is. Life has ups and downs. As long as you know that, then you’ll be okay. Our time in this life is too short to use in a negative way. There is too much negativity here now. This does harm to society. Let’s hope we can influence people to be more positive.