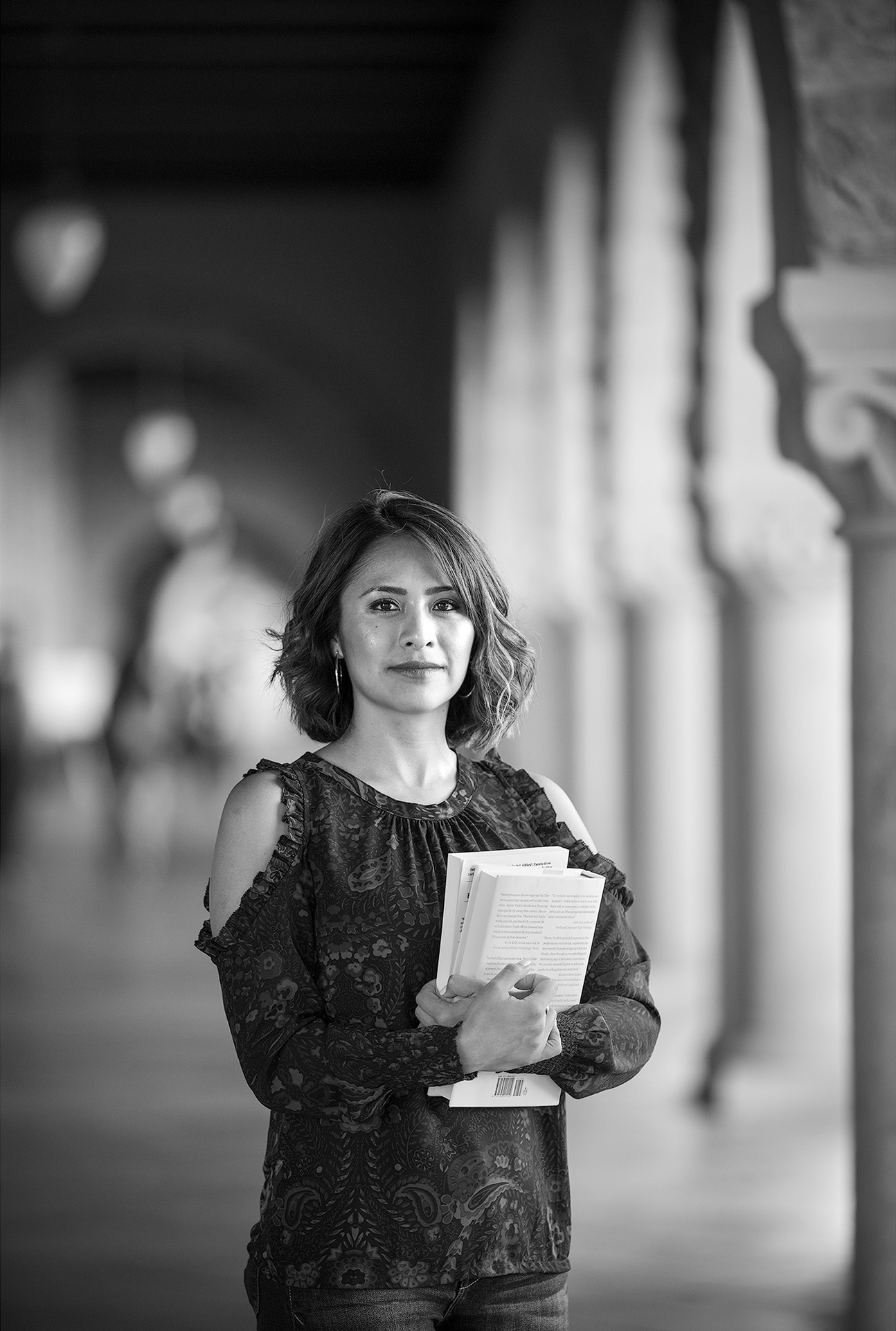 I am Iliana Perez, I am currently a doctoral student at Claremont Graduate University. I do research on undocumented entrepreneurs. I’m about to defend my proposal in two weeks. I also work fulltime as a research analyst at the Stanford Graduate School of Business with the Stanford Latino Entrepreneurship Initiative. That is my daytime job. My evening and weekend job is an immigration advocate. I’m an entrepreneurship ambassador with a nonprofit organization called Educators for a Fair Consideration that supports undocumented students.

My family came here in 1995 from Mexico, from near Mexico City. The reason we made the difficult choice to come is because there was an economic recession in Mexico at the time. My parents were facing extreme economic hardships so they made the decision, like millions of other individuals, to come to this country so my younger brother and I could have a better life.

We settled in the central valley near Modesto, Turlock because in the 40s, my great grandfather was brought through the Bracero Program. Because of the war, there was a need for agricultural workers from Mexico. It’s interesting how immigration policies bring and take away immigrants whenever it’s needed. So, we have a strong history of us being in the central valley and working in the fields. My dad came here to work in the fields, and we were trying to figure out how long they should stay.

I have known I was undocumented since I was very young. My parents stressed the importance of education very early on, since we were in Mexico. So, I did excel in school from the moment I got here — which was third grade. I always enjoyed math. I came here as an English language learner and it took me a while to catch up with the language, but I knew math. I just always had a knack for math, it was the one thing I could impress my teachers with. That’s really what allowed me to excel in elementary, junior high, high school.

In this country, there’s a Supreme Court ruling called Plyler v. Doe that allows any immigrant, regardless of immigration status, to have access through K-12 education. Anybody can make it through, but they left it up to the states to figure out what to do with an undocumented immigrant once they do make it out of high school.

I graduated from high school in 2005, before there were Dreamers or DACA. I was accepted to many schools after getting good grades, the whole package, but the problem I faced was finance. The challenge as undocumented students to go to college is that we didn’t have access to financial aid. I was privately funded by the Smittcamp Family on a scholarship at Fresno State, ended up getting a degree in math there. Because it was privately funded, even though it’s within a state system, it had the discretion to give out the scholarship to anybody. It’s a full-ride scholarship that pays for tuition, room and board.

I moved on to pursue graduate school.  I made it all the way to my first year as a PhD student at Claremont Graduate University without DACA. The PhD was also privately funded. It was a fellowship that was created at Claremont Graduate University specifically for undocumented students through a collaboration between my advisor, William Peres, and the dean and president of the university at the time who thought that this would fit in with the mission of the university. And then DACA announcement came out in January of 2012

After I got my degree, the biggest hurdle became to figure out what do undocumented students do after they graduate. I had a degree in math, a master’s in economics and I couldn’t earn a living as an employee without work authorization. However, in this country, any immigrant can earn a living as an entrepreneur by working as an independent contractor or starting a business, regardless of legal status. That’s written in federal law. So, there was no need for me to get a lawyer. A lawyer is only needed  when somebody wants to work as an employee. Anybody can come to this country, invest, and start a business. We all get either a Social Security Number or an ITIN Number, and everybody can pursue entrepreneurship as long as we pay our taxes. I began working as an independent contractor with my degree in math and started to think about how all this tied in with immigration.

There’s the still a fear of deportation. That’s the challenge, getting work authorization. People need to adjust their status, myself included, to avoid being deported. We’ll probably never hear about the undocumented entrepreneurs. As undocumented individuals, it takes a lot of courage and effort to come out.

I am currently a DACA recipient so I do have relief from deportation. But it is estimated that about 900,000 undocumented individuals across the country are entrepreneurs. They may not be able to get work authorization, but they can hire US citizens. So, in contrast to the idea undocumented immigrants are stealing jobs, many individuals are actually creating jobs for other folks. It’s estimated that about five percent of DACA recipients started a business. And there are 11.3 million estimated undocumented immigrants in this country.

I now work with an organization that disseminates research and information about entrepreneurship and immigration, and we also support undocumented entrepreneurs. As many undocumented students such as myself started graduating with degrees — I myself am about to get a PhD — we needed to think about what are we allowed to do in this country.

I have two more years of work authorization and relief from deportation. Other than that, we’re all waiting to see what happens. Unfortunately, it doesn’t look like any type of policy is really going to pass anytime soon. Immigrants are completely under attack and the former administration made it clear that immigrants are not welcome in this country.

The facts speak for themselves in terms of the benefit of having immigrants in this country, particularly the benefit of undocumented immigrants coming to this country. Immigrant labor has benefited the economy in so many ways. The cheap labor of immigrants, for anything from agriculture to manufacturing to cleaning services, allows us all to benefit from low cost for pretty much anything that we consume. Aside from that, there are immigrant entrepreneurs who are starting businesses at a much higher rate than native-born individuals.

I am personally trained to be a researcher. I am trained to analyze social issues and come up with solutions based on facts and data. That will ultimately be my life’s work, to continue to think about these policy solutions that make sense and that really take into consideration the human experience.

There are international policies that are affecting where people are able to live. I think that we all need to do a better job of understanding why are people leaving. People don’t want to leave their homes and cross the border, people don’t want to be separated from their families. So, we need to understand why people are willing to go through all of that. We need to understand that this happens because there’s something wrong in our home countries that affects all sorts of immigration issues around the world.