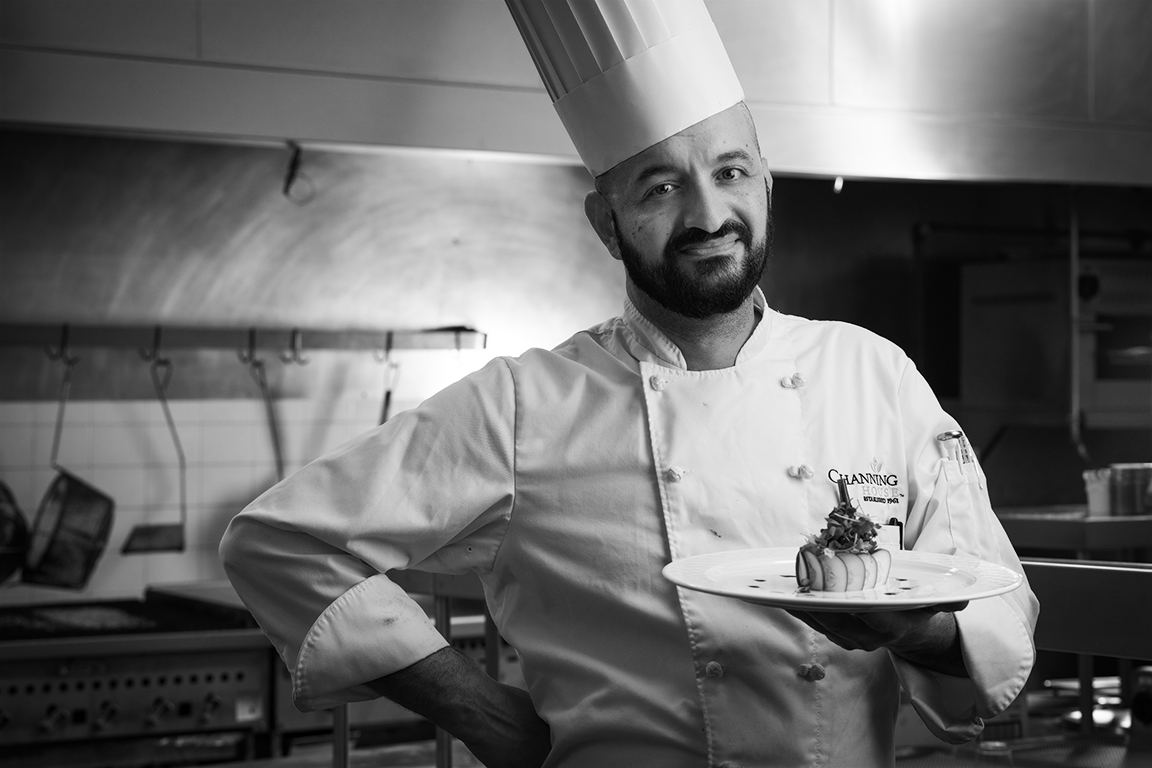 My name is Ghazwan Alsharif. They call me Chef G here

I’m born in Baghdad, Iraq in 1971 from a diplomatic background. My grandpa used to be the Minister of Defense. My father used to be an ambassador, and we traveled all over Europe because of my father’s job. That’s how I learned English.

The last war I was a translator for the American army. But I used to be a diplomat and a businessman, andI lost both of them. The diplomat I lost it because my background, I was from the previous regime, and my business because all the infrastructure collapsed. I used to have a gift store, a wedding design catering store and a restaurant.

It was dark for me personally because of who I am I was not allowed to do many things, even though I was a 30 years old man, with an arranged marriage. I was not supposed to do things, for example, cooking– one of the things that I obviously love. I’m not allowed to cook even if I own restaurant there because of my background. My tribe is a powerful one and men cannot cook. You don’t have a good reputation if you cook. Let the female do the cooking, you just do other business.

There is a documentary called From Baghdad to the Bay about my life. But when I look at it I was like, “Wow, who is this guy?” It’s unbelievable that I’m standing right now in front of you guys and talking. It’s a blessing.

Yes, I worked with the army and I was their translator and then they just accused me of being a spy and they put me in jail and they tortured me for 75 days. But then they realized they made a mistake so they apologized. But I wanted the guy who put me there to apologize, he never did. Actually, he got rewarded by President Bush. He’s the guy who got a medal as he captured Sadam Hussein. But I was tortured during that time without cause.

I always wanted to come to America even after I was treated so badly. I always loved that song called San Francisco.  When I listened to it. it gave me chills, always, ever since I was a kid. This is my city. It’s my country now. I’m an American citizen now.

It took a while. I’m very determined to do what I want. It was super hard. It was not easy at all. A lot of people have been rejected. I struggled because when I went out from the detention,I still worked with them because I couldn’t live outside the base because I would have been killed. In 2005 I went to Jordan and sat there for about three years till 2008.

I spent those 3 years processing to get a visa to come here.  But application was more complicated because I was in detention. I went through a lot of interviews, a lot of stress. A lot of back and forth from the Pentagon. Finally I got a message from Pentagon to prove that yes, all what he’s saying is true; he never should have been detained and tortured. Then they said, “Okay, where do you want to go?”  And I was like, “San Francisco!” Not a lot of the people who are comfortable to come out as who they are, especially in the Middle East. Not just the religion, it’s just the culture and all that. They’re not acceptable. I’m the only person from the Middle East and North African LGBTQ community to organize parties in San Francisco. I’m the only person doing it because I have the guts.

My background is political, but I don’t want to talk about politics anymore because it’s really stressful, especially, what’s going on in the US now. The country is very divided. It’s not mixing, no. It’s dividing. The majority of African Americans want to be separate and the majority of whites want to be separate. Not in San Francisco, but this is what I’m seeing right now in the news.

If someone is anti- immigrant I will ask them “Who made your food?” That’s what I’m going to tell him. Who’s making your food that you’re eating? Immigrants. That’s all. I’ve been taught not to hate, but I will face the person who has hate and I will be better and try to make him feel worse. But it’s not easy to convince anyone. So I say if I can change one person, that one person may change ten and  those ten may change 100.

There are so many good things about America. I came from nothing and now I’m an executive chef. I have great friends. If you work hard, you can build yourself. That’s what I believed and that’s what I saw in America that yes, if you work hard, you can do that. Other countries, it’s not going to happen. Here you have a lot of people who actually listen and want to learn. They want to know about your background. In other countries, they don’t care. That’s good thing. I have been disowned by my tribe because I worked with the army. I built my life here. I work hard and I built myself. I have an identity right now. This is my country now.

Previously, I didn’t have an identity. Now I do.

I make a lot of people happy with my food.