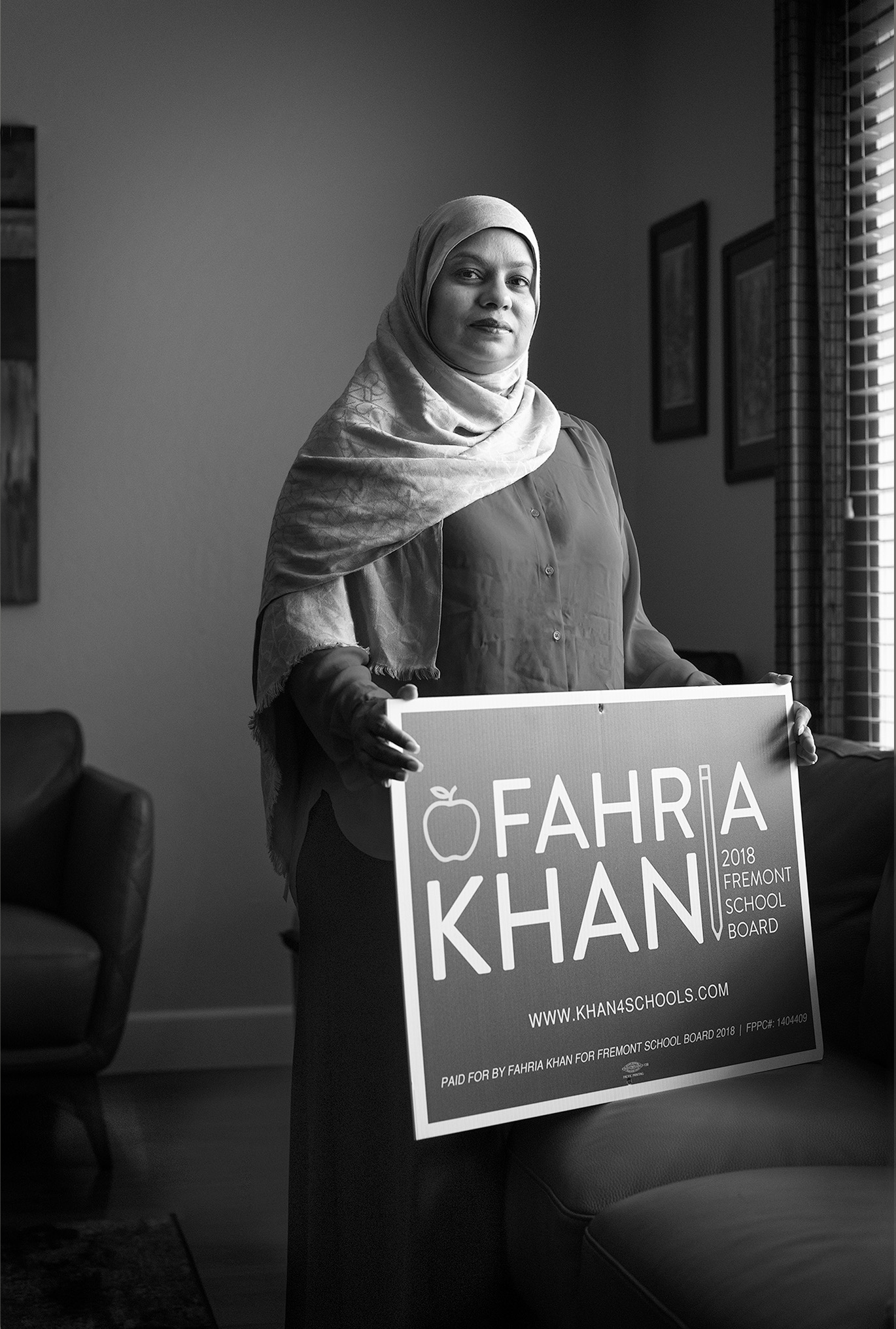 My name is Fahria Khan. I was born in Bangladesh. My father came to the US with us in 1976 to do his PhD at Arizona State University. I was two years old. My parents later became citizens.

I became a citizen when I was in high school. On the day that I went to take my oath I returned to school and all of the students and the teacher in my US History class had made this really nice card, congratulating me. I remember that moment; I just started crying because it was so significant to become a citizen. I’ve lived here all my life and I don’t consider myself so much Bangladeshi as I do American.

I grew up mostly in Arizona but we did live in Starkville, Mississippi for three years when I was a child while my dad was a professor at Mississippi State University and in North Carolina for a year. We then moved back to Arizona, where I finished my secondary schooling. I went on to MIT for college and earned a bachelor’s degree in biology there. I got married while I was still in college. I really wanted to live in California so I found a job here and my husband followed. We’ve lived invarious places around the Bay Area and are now in Fremont. I work part-time for a nonprofit called Love Twice.

I spend about 30 to 40 hours a week volunteering with our school district and our schools. I’m president of the Fremont Education Foundation. I have a Girl Scout troop. I do a lot of charity work.

I got involved in political action after the 2016 Presidential Elections, through several Facebook groups, including ones like Pantsuit Nation that were started right after the election. After being depressed and upset by the outcome of the election I decided that I was going to do something about it. I started by post-carding. I sent many postcards to voters in other states to help flip congressional seats.

I became inspired to get involved in our local government. Within two months, I was appointed to the Human Relations and Status of Women commissions in Alameda County.

I am the only Muslim and hijabi on the Women’s commission. I am often the only brown person in the room. I’m often the only hijabi in the room. I try to do what I can to improve the situation. I work with the Fremont Education Foundation, which is actually quite small considering how large our city is. This group has been doing the same thing for the last 20 years while the world around us has changed. I’m trying to change the focus toward science, technology, engineering, arts and math. I think arts are especially important. Of course, academics are important, but it’s important to have a balance.

I’m doing all of this in addition to being a mom of 5 children.

After thinking about what was needed for our community, I decided to run for a seat on the board of the Fremont Unified School District in this recent election.

Fremont has a large school district, the second largest in Alameda County. It supports 35,000 students. Oakland Unified has about 37,000 students. In two years, we are projected to surpass Oakland Unified in student population, due to the construction of 4000 new housing units being built here by BART.

Fremont is very culturally diverse. We have a majority-minority population: about 75% of the city is nonwhite. Despite having a 69% Asian or Asian-descent student population in the Fremont Unified School District, we have never had a South Asian on our board. Out of five school board members, four are white and one is African-American.

I have the qualifications to be a school board member. For the last 15 years I’ve been involved in many different programs at the public schools. I have the track record. I had all of the necessary endorsements: the Democratic Party and the teachers union, the labor union, the police union, Congressman Ro Khanna.

Another big focus of mine is innovation. We live in Silicon Valley, but our school system is teaching too much rote memorization, where the kids are being lectured at, rather than teaching in a way that gets them to participate. This is no way to engage them and help them connect to something meaningful in their life.

All three local news channels picked up my campaign. There were two positions open. Of the seven candidates, I came in third. I was close!

Running for political office for the first time was an interesting experience but I think politics is not for me. It was hard. I’m still recovering from it emotionally and physically. It really takes a lot out of you. I don’t think I would run again, but I’m hoping to make a contribution from the outside.

Losing the election was especially difficult for me. I feel that I got stereotyped because I wear a hijab. I’m very obviously Muslim. I’m seen as representing all of the Muslims in the world. I believe that racial and cultural prejudice was a factor in my loss.

I got a lot of anti-Muslim hate messages on my Facebook page. And when I was canvassing, some of my volunteers had doors slammed in their face and others were threatened.

On the other hand, I did get a tremendous amount of support. We ran a very clean, positive campaign. When looking back on it, I wanted to make sure that the campaign would be something I and my kids could be proud of.

I can’t get over the ugliness and the negativity that I saw in this campaign. It’s really affecting me more than I thought it would. There were many nasty messages and videos posted on various mailing lists around the city about me and another candidate who was running. I just can’t understand why someone would do that. Why would you spread all this nastiness? If you’re going to campaign and you’re going to run for office, you should run on why you are the best candidate not why so-and-so is not a good candidate. That shouldn’t be your platform.

This negative campaigning really targets people’s basic fears. It’s an animal instinct. It appeals to the worst in human nature. Unfortunately, a lot of people really respond to that. I guess we all do to a certain extent.

In talking with voters during my campaign I have found that reaching out to people with different opinions than mine helps us find common ground.

Especially in this last election cycle, I see that kids watch what adults do. When a local elementary school had their student council elections, their posters were getting defaced or ripped down. Kids mimic us. Our kids deserve better. We need to show them that we are respectful.

Tolerance is a foundation. People should be valued for who they are. I want to be seen as a person who is educated, articulate, and a person who gives back to her community. The hijab should never be a factor. Covering my hair with the hijab is something that’s personal to me. It’s between me and God. Some people think that wearing religious garb is a sign of oppression. If I was truly oppressed, then my husband never would have let me run for school board. I am definitely not oppressed, suppressed, or repressed in any way. That is how it should be.

I feel that I should be judged only by the actions I take.

I would like to get more immigrants to run for office. Especially, for Muslim girls, I want the stereotype to be broken.

I was lucky enough to have a father who believed that I could do whatever I wanted.  I was very blessed. I’m hoping to instill that in my daughters and also my sons. I want them to have a strong woman role model in their life because my husband and I, we’re equal partners.

Race is the number one reason why kids are bullied in Fremont Unified. Kids who are mixed race get harassed from both sides. In the current national narrative it’s easy to stereotype and label people, to put people in boxes. This needs to change.

Deep down, I think people are good. We all have many of the same hopes and dreams for ourselves and our families.

I’m always amazed at how much similarity there is in the prayers of all different faiths, including Ohlone Native American tribe to Buddhist to Muslim, Judaism, all of them, and different denominations of Christianity. It’s about being good to your neighbor, being kind to your neighbor, trying to do good in the world, loving each other. I think that we need to bring more of that out.

I think that immigrants need to be more educated in what it means to live here and be engaged civically. I realized that people just don’t understand how to vote, how to read a ballot, what ballot measures mean, how to do research on candidates, where to vote. Many people didn’t know where their polling station was. The California ballot is huge. It’s three pages front and back so it can be overwhelming. It’s a daunting task to understand what everything means. It’s important to vote in a presidential election, but it’s equally important to vote in your local election on issues that impact your day-to-day life.

We need to educate people about why it is important to get involved in their community. I tried to tell voters why they should care about a school board election. Most people buy their house because of the school district. It directly or indirectly affects you. It’s affects property values and if you have school children it directly impacts your family. 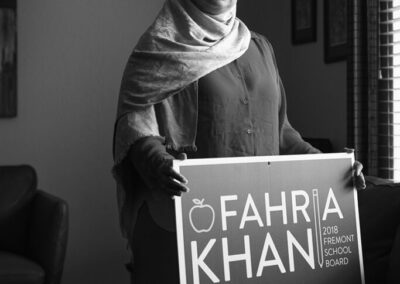