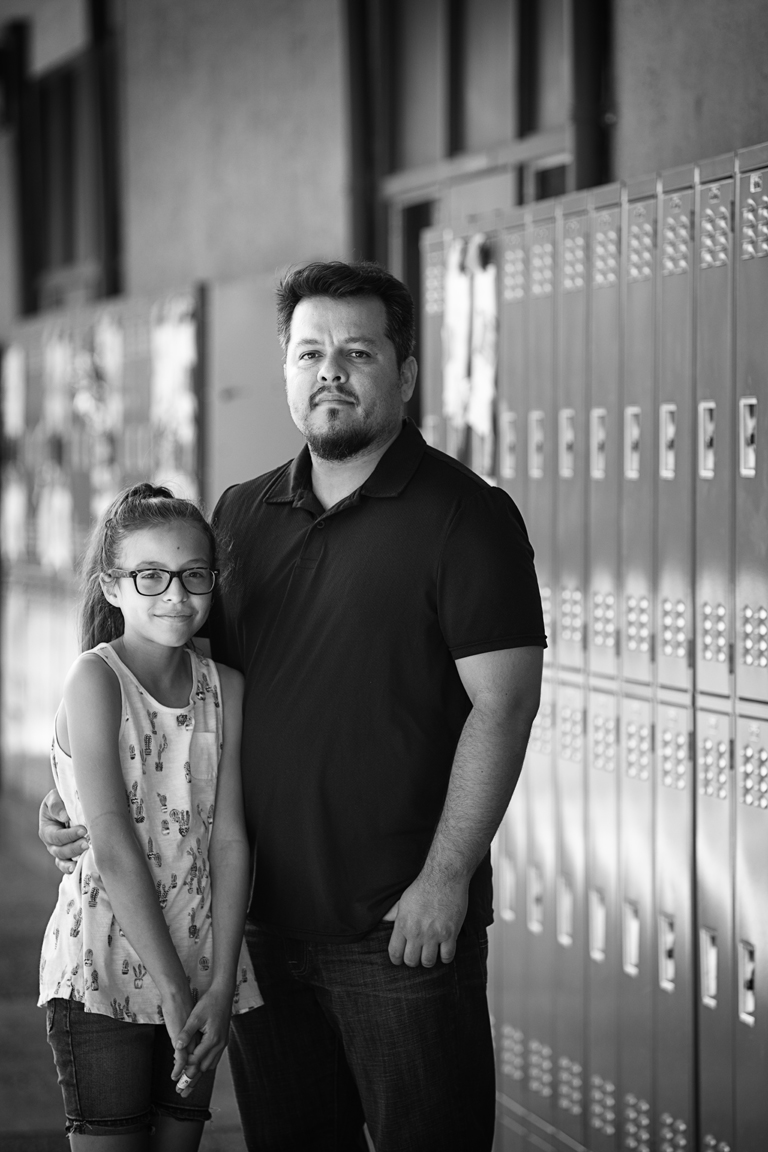 I am Everardo Lopez originally from El Tamarindo, Nayarit, Mexico.

My mother brought me here to the US in 1994 when I was 9 years old. She had come previously, leaving me with my grandparents. I remember telling her I want to go with you and I remember crying that night. And then long story short, she said, “Give me some time and I’ll bring you to me.”

I remember getting to Tijuana and then I was at one of our relative’s house and then they said pretty much go to sleep. And when I woke up, I was at my mom’s house. I remember it was my birthday, August 28, 1994 maybe like 5:00, 6:00 in the morning I opened my eyes and like, “Where am I?” I was in the United States.

I got my residency through my dad. He was a legal resident at that time and we had to put an application I think it was a 245. He was the one that submitted my paperwork and I fixed my residency through him. We filed for residency in 1998 and seven year later I got my green card. I got my citizenship in 2015.

I’m a driver supervisor for a 4×4 trucking company. Pretty much oversee the whole Northern California operation — we deliver parts to small mom & pop shops. Our company has retail stores so I’m pretty much in charge of the distribution of the parts and make sure everybody is doing their job. There’s three managers where I’m at. I’m the driver supervisor. I’m actually the only Hispanic guy in my group.

I have to supervise a lot of drivers who have very negative views towards Hispanic immigrants. They think that it is simple to get a green card and apply for citizenship. They think you just go to DMV and file something and then boom! Here you go. You’re good. And it’s not that simple. A lot of the times it’s kind of like why can’t they be like you? Why can’t the others just wait their turn? There’s a lot of circumstances that I try to explain to a certain extent but I can’t change their minds. They can’t put their feet in somebody else’s shoes.

I also get teased a lot about being Hispanic. I don’t see it as bullying or anything like that, because I can take the banter. I will return it. That’s my model. You have to be able to take it. For example, they tease me and tell me they are going to throw me back across the river. Most of them are the European descendants so I was like, “You have a bigger river than me. They’ll pull me out of here, I’ll be back tomorrow. You, I don’t know.”

But going back to the identity thing — I think I went a little bit off — a lot of times I say, “We’re all immigrants.” I always throw that at them. “No, no, no.” I was like, “Unless you’re a Native Indian, I don’t think you’re from here.” “Well…” they start — then I say, “Where are you from, dude?” I always tell them that. I say, “Where are you from?” You make them think. “Well, I come from Germany, I come from this, I come from…” It’s always like, “But my family has been here for certain generations.” So was mine. California was Mexico. My ancestors were here probably before yours.

I fit a certain profile that they accept. The biggest thing that I feel for them it’s like if you don’t learn English, then you’re not good, man. Why are you here for? I see they kind of like it if you try to learn their ways, which is kind of their standard how they tend to accept you. This is who I am. I’m not living to their standards, these are my standards.

When I came here, I was ten years old, but at that time I already knew like this is not my country so I have to respect this not being my country. That was just my way of thinking. I’m a visitor and I need to respect the same way I expect them going to Mexico. You’re in somebody else’s home so you need to respect. That was my way of thinking at ten years old. And there was fear. I remember going to the  DMV was like they’re going to lock me up. If it has something to do with authority, like any government offices kind of like I don’t want to go in there.

Driving was another thing. I remember the first time a cop was behind me, I was shaking. I had to pull over and I remember I was just shaking, my whole body was like — because I had a work permit, but it was not like a full validation of being here legally. Like I said, the camaraderie at work, I think they do accept me to a certain extent, but at the end of the day, I’m still Mexican. I made a name for myself because I’m a hard worker.

There are two other Hispanics in the company but they don’t identify with immigrants. I can see that they’re from Mexican heritage, but they don’t accept it. The other guy, born here, stuff like that, “Yeah, why do they come here? Fucking send them back.

I choose my battles.  I tell them they wouldn’t be able to afford their food if Mexican immigrants were not working in the fields. If I have something smart or that I have facts that I can do, I say it. “We will create machines to pick them.” There’s always a comeback. There’s always we don’t need you guys in here. And then when somebody is not being receptive or somebody is not willing to put compassion or willing to understand the other person’s situation, you’re just wasting your time. Once you get into that defensive mode of I’m right you’re wasting your time. Move on- I know I am not going to change this person.

My daughter Samantha experienced a lot of discrimination in school. It was back in 2016 during the Trump campaign when she was eight years old.

We are about to have dinner and she’s just nervous. It first started with her coming here and then one day she got the courage to ask me, “Dad, you’re Mexican, right?” And I said, “Yeah, I am.” She’s like, “Are they going to send you back? Because that’s what they tell me.” School kids are telling her they were going to send her back, I think, because you’re Mexican. You don’t belong here. If you see my kid, she looks like a little white girl. But the fact that she — I always say you’re Mexican American. Don’t forget where we come from, kind of deal. But that was a very time where she was just nervous.

She was incredibly full of anxiety. “Are they going to send us all back? Are we going to stay without a dad? Is my dad going to be allowed to be here”? My kid Samantha is very safety conscious, very aware, cautious so I can just imagine what she was going through during that time.

She told us what happened at school. They put like four desks together, something like that. It was a reading group. So some of the kids were putting books around her. Then she’s like, “What are you guys doing?” “We’re building a wall for you.” I remember that time she said a certain kid was just being verbal about, “Yeah, Trump, we’re going to build a wall.” The kid was very pretty much aware of what was said by Trump during that time.

I know my wife she brought it up to the teacher. They said they were going to talk to the parents or something like that and address it and nothing happened. And then a parent of a child started to yell at her and say something like we are going to send you away. I think she said something like if we don’t like it then get out of here. Kind of like you don’t belong here in this school, something like that.  It was something terrible. It was back in 2016 and then we moved her to a different school.

It has been two years and she is still hurt. We are at the dinner table the other night and she started sobbing. I noticed that she is always trying to please her friends? Do what her friends want her to do. I told her that she has to be herself, her own person. I was thinking she was just shy and cautious and I don’t like this or whatever, but she pretty much brought it up and because of this incident that she had in school two years ago, she’s like she pleases her friends so that the parents’ kids don’t question her. She tries to avoid any confrontation with the parents of her friends. She is still traumatized by what happened two years ago.