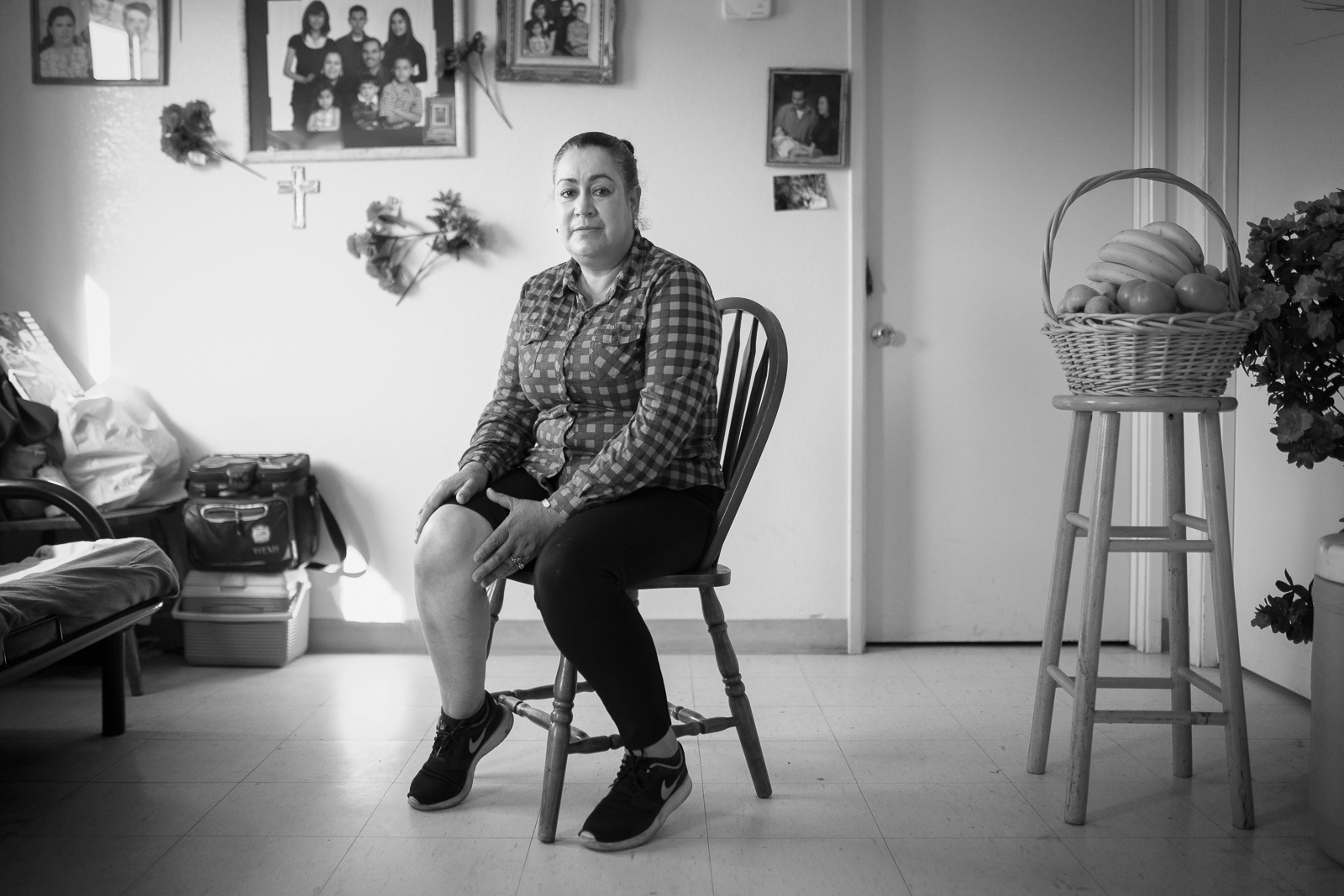 My name is Elia Fernandez. I work in the fields, picking strawberries. I’ve been working in the fields for 25 years and I’ve lived in this housing complex for 28 years. I work for five hours a day. But the harvest season is ending right now so there’s not a whole lot of work. We’re going to plant the plants for the next season starting on the 18th of November.

It is hard difficult work in the fields. My back hurts all the time. In order to work I have to crawl on my knees through the rows of strawberries. My right knee hurts so much and it’s like I have an electric spark going down my leg from it.

I have to leave by the 20th of December from this apartment, and I go to Mexico when this camp closes. I really can’t stay here because if I went into town, I could not afford the rent. I only have to pay $360 to live in this apartment. I have green card residency so I have to go back to Mexico when there is no more work here and wait until the next harvest season begins.

I really want to stop working in the field, but I can’t because to live here, you have to work in the fields, otherwise, you’re not allowed to be here. There’s nothing I can do in Mexico to earn a living and I have a 13-year-old daughter who wants to study here. One of my oldest daughters is at Cal State in Sacramento and just graduated with a degree in psychology and her goal is to get a doctorate. But it is very disruptive to have to pull my youngest daughter out of school and have her go to school in Mexico for 3 months before returning to school here in the US.

It’s a great way for the kids to keep them from getting educated and creating the next generation of farmworkers. School is a big thing for farm workers. In fact, to the point where some farm workers tell me if their kids won’t study, they take them out to the field and make them work. Gives them incentive, you either do this or study.

I wish farm workers would be treated better. They give us water that tastes terrible but I am lucky that I have never worked in the fields while I was pregnant or I would have had children with psychological disabilities.

It’s illegal to spray near farm workers because we have to breathe all of this pesticide spray and we don’t even know what they’re using. They won’t tell us anything about what pesticides they are using.

In Driscoll, which is the biggest berry brand, they really counseled them and told them that they were going to spray to not go near certain signs or certain parts of the field. But this goes on all the time. I have people telling me they’re spraying next to us and some of us are fainting, we’re vomiting, et cetera. And if our organizer from a NGO calls the county commissioner of agriculture, he sends out a team to investigate, the farm workers say nothing because they’re undocumented. And then when they leave, the grower comes back and blames the farm workers. That’s the system we’ve got.

I want to become a citizen to be able to vote.