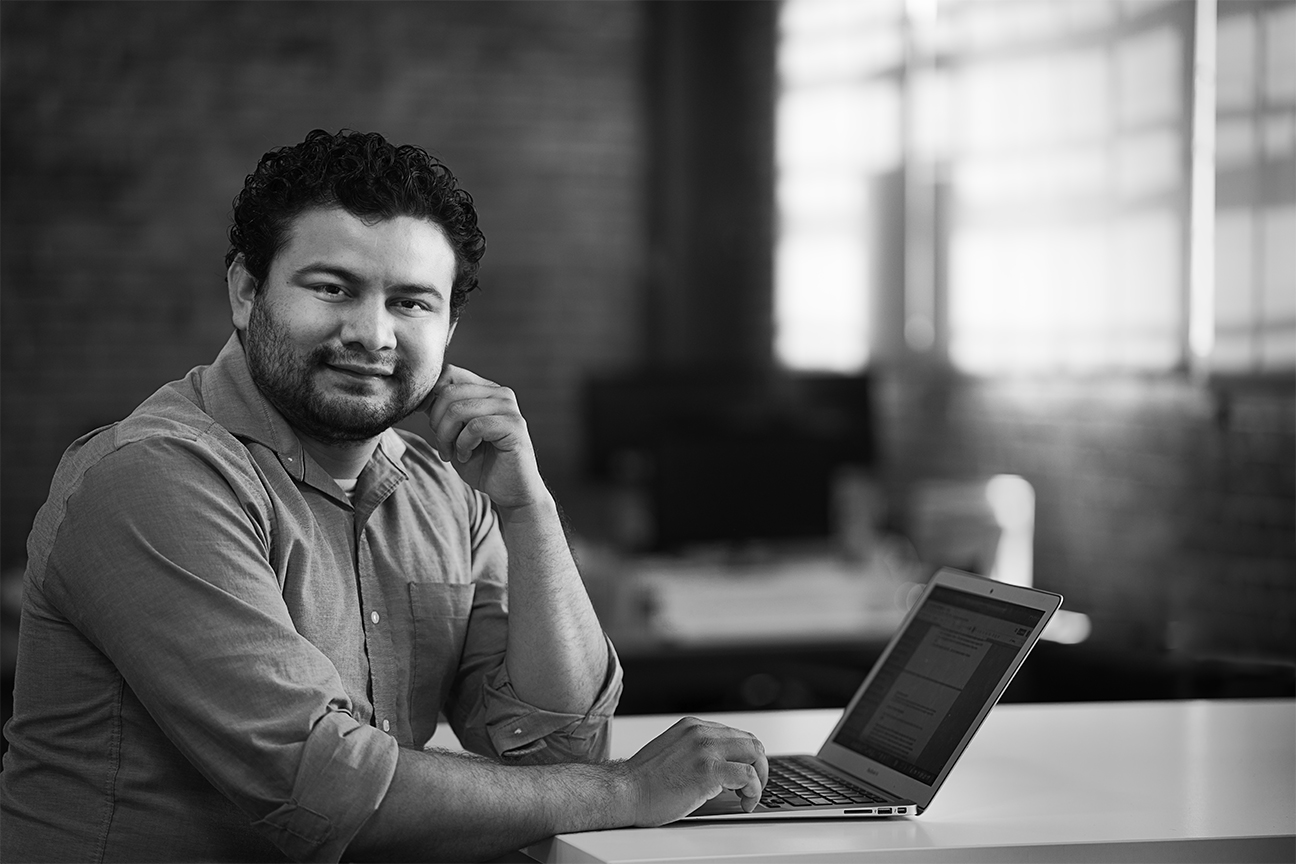 I come from La Unión which is this town – not even town because towns have accessible roads. It’s in the middle of nowhere. To this day, there’s only two houses that have internet, there’s only a few homes that also have cable. They do have electricity, but it’s still developing. Most houses are made out of adobe along dirt roads. That’s where I grew up. The nearest hospital was probably about 15 minutes away by car and about an hour and a half by bus..

We weren’t poor, but we weren’t rich in El Salvador. We had enough to sustain the family. My dad was a contractor working for the government on building new roads in El Salvador and the infrastructure, and mom had her own little business where we would go out and sell fish to neighboring towns. That was our business because we helped mom because most of the time dad was away working.

My mother was the first one to come to the US. She came here illegally undocumented to live with her step-brothers who were already established in San Francisco. The biggest challenge for me was that I was born with cataracts in both eyes.

I depended on my classmates and my brother to write everything that was on the board for me.

I didn’t have the academic support that I needed. I remember I’d learn how to read by looking at my brother and my mom would teach me and would grab dark markers and write big letters for me to see what was going on. And that’s how I started learning the alphabet and then I started putting letters together.

I always loved school and I didn’t want to move to the US. I never had a desire to be here, growing up. Many people do, but I was one of them that I just did not want to be here. But then mom convinced me the opportunities available to me if I were to be in the US then I said okay, I will leave. We were minors, I was 12 years old and my brother Mario was 11.

My mother told me about the resources like public schools here would help me learn English, learn the language, like have the academic support that I badly needed because I was behind academically. I didn’t read my first entire book until 9thgrade. I was really behind, not because I was not smart, but because I had a visual impairment.

She knew that by being here things will happen. And thankfully, she convinced me to come. And when I was here, that’s when a lot of – I’m super thankful to the educators that took me under their wings, I should say, and taught me the ropes of okay, I am going to recommend you with this clinic, with this doctor, using their own network. And as a result, I went to St. Anthony Clinic in San Francisco and they connected me with a few doctors who were able to put together $50,000 for me to have corrective eye surgery. Because as an undocumented minor, I was not eligible for many care resources that one would be eligible for if he or she was born here.

And so, I’m thankful to this day to those doctors who were able to donate money for me to receive my retina transplant. Thanks to that, I was able to graduate from high school, pursue a college education, be the first one in my family to go to college and now I’m working. It’s rewarding to see the contributions from people at that time that I still carry with me.

One of the first instances where I started to learn what it really meant to be undocumented when I just couldn’t access health care as easily. Of course, there were still resources for me, but it was a little more difficult for me.

The second part where I found out that I was undocumented was my senior year in high school, I was 18 and I couldn’t apply for many scholarships that I was eligible for, but I was excluded just by the simple reason that I did not have a social security number at that time. That prevented me from going to a four-year university straight out of high school, and decided to go into community college for my first two years.

I started with College Track, which is the organization I currently work for, when I was in 9thgrade. This program is a national nonprofit organization that supports first generation students to pursue and graduate a college education. Advisors from this organization were always there for me throughout community college and then they guided me through transfer process when I had to transfer to the University of San Francisco. I was very lucky that I went from a

I am a Deferred Action for Childhood Arrivals, or as a lot of people know, DACA beneficiary. I have DACA which is why I’m able to work legally and pay taxes in this country. I don’t know what’s going to happen with DACA. It is very difficult to stay focused in my work knowing all the uncertainties that could happen

Let’s looks at the fact that of those 800,000 people who are the current DACA beneficiaries, over 90 percent of us have fulltime jobs. And therefore, are required to pay taxes under DACA because we have a social security number, even though we don’t have access to receive social security services. That’s one. Straight up, let’s look at the data.

Since 2012, when DACA was instituted, 90 percent of DACA beneficiaries have been employed and have been paying taxes since, but also first time homeowners have been created through DACA because we have jobs now, we can work legally and then could take a step up to possibly owning a house, a car, open a bank account. There’s plenty of data that also shows that DACA beneficiaries are creating business in how we contribute to this economy.

A lot of people misunderstand that DACA beneficiaries actually are fully registered with the government and we could be deported at any time, one, because the government has our latest address, our contact information, my phone number, my email, everything. Everything you could possibly ask; my fingerprints, the government has, and it only takes one ICE agent to show up to my house and deport me. I took a step forward because I want to be legal in this country because DACA is not permanent. It’s something that I have to renew every two years.

People don’t understand that we have a record with the government. If my record is clean, then don’t accuse me of committing any crimes I’m not responsible for. Yes, I know that my community is not perfect, but it doesn’t mean that everyone is like that. It doesn’t mean that everybody is rapist or gang members or that are not paying taxes because I’ve paid taxes since I started to work at age 15. So don’t come up to me and tell me you don’t pay taxes because I have paperwork that will show that I actually do. And I can truly say that that is the case with the majority of DACA beneficiaries.

I think people have to travel to fully understand where we’re coming from. If someone who wants to deport me or the rest of my community, then they have to visit El Salvador or Guatemala. See what’s happening in Guatemala right now. A lot of families are dying, kids are dying, because of active volcanoes in Guatemala’s horrifying communities. El Salvador’s gangs interfere with the community and therefore, even if you try to work, you have to constantly be paying rent to gang members to keep you alive. Honduras, same case. Nicaragua, same case. Not on a vacation, go to where all the cartels have taken over that portion of Mexico. I would encourage people to go to these countries and see the situation of why so many people are desperate to leave. Because when we come here, we work extensive hours — or at least I should say migrants without a college degree. We work excessively in multiple jobs cleaning hotels, working in the fields.

We’re not coming here to take away things, we’re coming here because, we’re desperate to be safe. The Bay Area is so expensive, but I am happy here. At least I know that I will wake up and live the next day, unlike El Salvador where I’m from that it’s a very unsafe environment. I love El Salvador, but I’m sick and tired of that environment. It’s not worth my time to be over there when there’s something better. That’s why a lot of families decide to risk their lives crossing the desert, crossing the Rio Grande area, and decide to leave everything behind. Not because they want to take away resources from here, but because out of desperation.

We have seen migration from biblical times to today. The biggest and wealthiest nations have always had some sort of migration. Supposedly, this country is a Christian country. God was a migrant too. So, to my religious brothers and sisters who oppose migration, then it’s like you’re opposing God too.