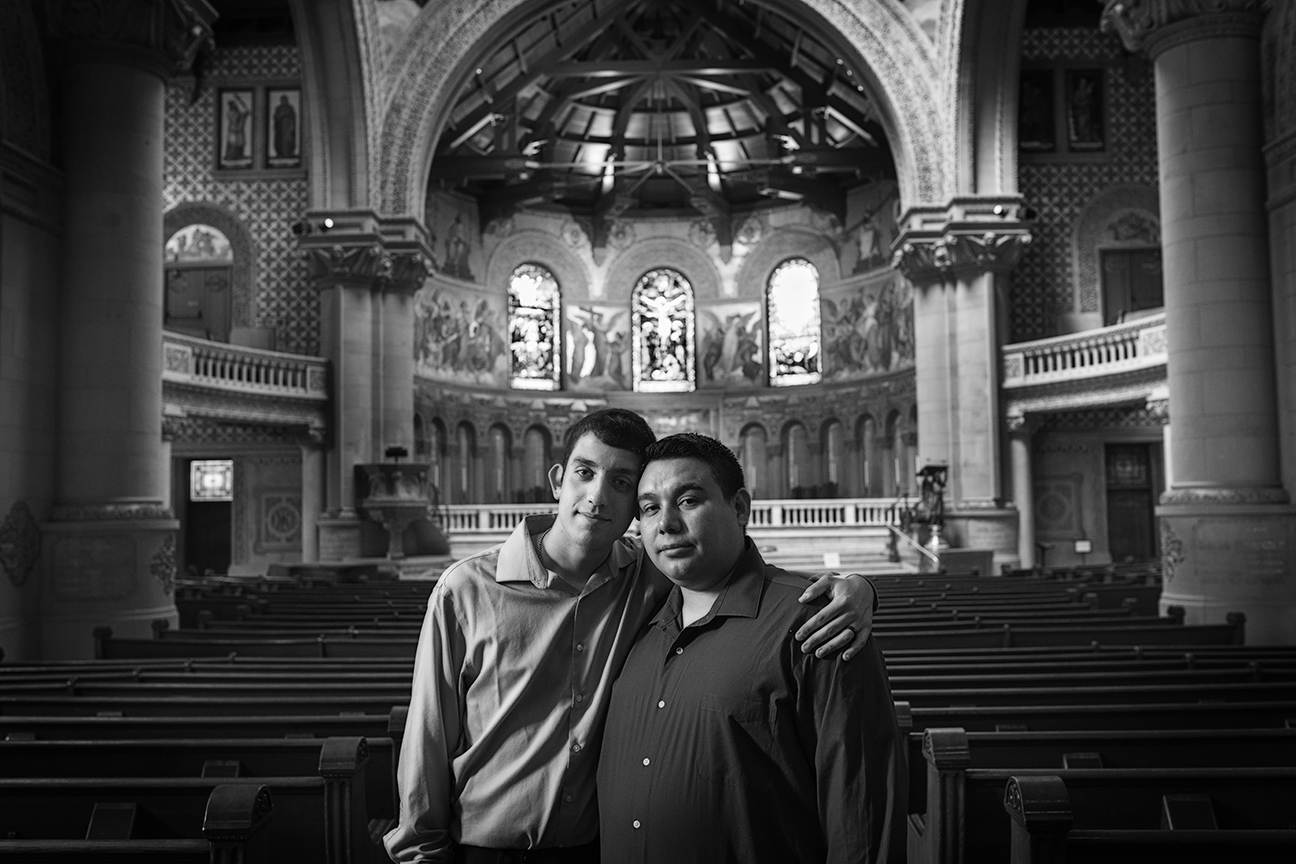 Angel:    My name is Angel Garcia, now Angel Castillo-Siefe and this is my husband, Christopher Siefe.

Chris:         We met in 2011 at a queer prom that was being hosted at University of California, Santa Barbara. And Angel, similarly, was invited by the local GSA to come to this queer prom. I saw Angel and asked him to dance. We hit it off really well and had a really nice night. Then we started dating shortly after that. That was about eight years ago. And in August of 2017, we got married here at this Stanford Memorial Church, which was wonderful.

In 2016, we both moved to Stanford for me to pursue graduate school. We are both from Southern California — me from Santa Barbara, Angel from Santa Maria, California.

Angel:        I was born in Mexico City, then my family decided to come to the US. I was six years old at the time. First, I came with my parents and then my brothers came separately. I’m a recipient of DACA. I think one of the biggest risks is being deported. Especially with DACA being between “we’ll continue the program, we’ll not continue the program”. That’s one of the biggest obstacles with our immigration process right now.

Chris:         It’s been scary to follow the news and see a lot of people that want to remove the DACA program all together or make it have stricter limitations, all of which are bad things for Angel and could cause Angel to lose his job, lose his driver’s license.

Angel:        We were told it could take from six months to who knows how long to get a visa, which is the first part.  Being married helps us in that we were able to apply for me to become a resident through Chris, but there’s still no guarantee because we have to prove how is Chris going to be affected if I went to Mexico. Because they look at both options. They look at if I go to Mexico and Chris goes to Mexico with him or if Chris stays in the US. I think the hardest part is like this is all based on Chris. It kind of feels like I don’t count. America just wants to hear what the US citizen goes through, and that’s it.

Chris:         There’s little to no regard in how Angel’s family, the people he works with, or his own life will be affected by him being deported. It’s more about how the poor citizen of America is going to be affected by this if Angel were to be deported. Essentially, you have to make a case that Angel needs to be in this country in order for me, as a citizen, to be successful and happy and healthy.

We’re working on kind of trying to get documentation of that right now. It’s unfortunate that I’ll miss him and I love him isn’t a strong enough argument on its own. We need something that’s more tangible, like I’m financially dependent on this person or I’m dependent on this person to take care of me. Or that I can’t be in Mexico because there are fewer job opportunities for me there, or I will face some other conflicts that would be unbearable.

Angel:        We would also have to start everything all over because both our families are both here in the US. I do have family in Mexico, but I haven’t seen them since I was six so I have no connection with them.

Chris:         I think one of the stronger parts of our argument is essentially that currently, I’m in a PhD program. It’s a five-year program. I want to finish that. So, if something were to happen to Angel, then it would be really difficult for me to finish this program. Obviously, I can’t if I go to Mexico with Angel. But even beyond that, I want to find work in the United States. There’s more opportunities for me here in the United States than there will be in Mexico. If Angel gets deported I would have to follow Angel, which would have a lot of negative effects on my own life.

Angel:        Because it’s just him and his brother, and that’s all that your mom has. My parents are immigrants, and my one of my brothers is also on DACA, so there’s no path for them right now. At least, not until one of my younger brothers turns 21 or if I become a US citizen. My mom has been here  20 years, same with my stepdad too. My dad works for a landscape company, but my family also owns a landscape company.

Chris:         Currently, we’re just trying to find documentation that’s kind of tangible evidence as to why Angel needs to be in this country in order for me to be happy and successful in the United States. That involves getting letters from employers and Stanford as to why we need to be here.