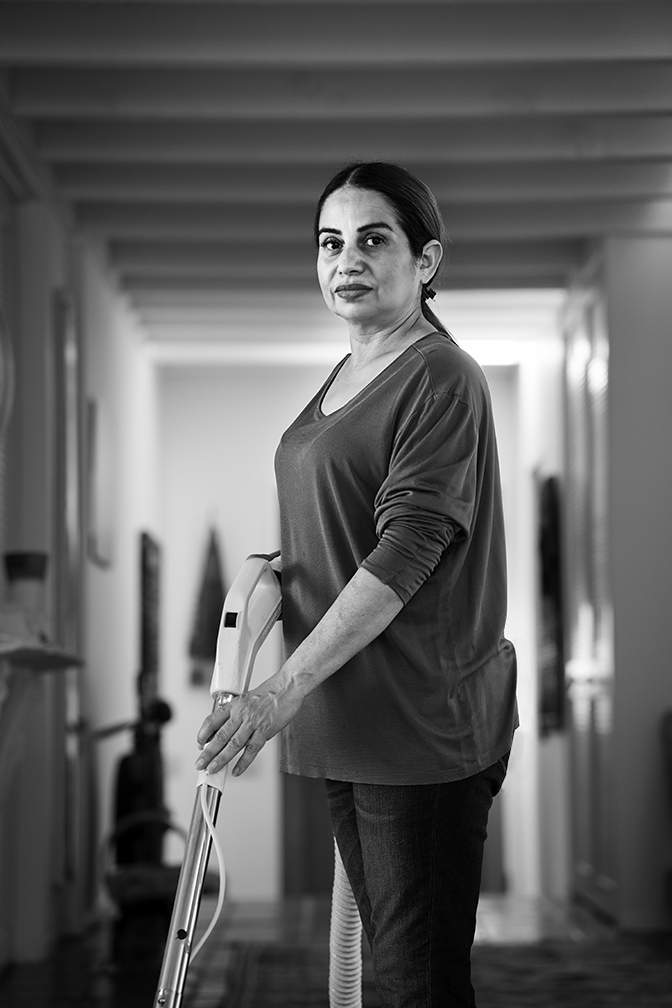 My name is Carmen Zetillo. I’m from Nicaragua, coming to United States in March ‘89. I come here because in my country the government killed my four brothers and put another brother in the prison for ten years and torture him every night.

When I come to the United States, the reason I’m coming is because in my country the government take all the family property and my house, all the money from the family. My family now had nothing. When they had taken everything, my mom no have home and I no have home too. So I going everywhere, wherever the night is come, I sleeping everywhere with my mother and my little brother. I am 12 years old.

We were homeless for a long time, more than a year.

My mother is desperate so she marries a man who brings us into his home, but he really bad. This guy hit my mom every time and I see it. I see when he hit my mother and she cannot go anywhere because she don’t have home. The only home she had is this home with this guy. So I grow up and see this man hit my mother and she cannot go to the police to say this guy has hit me because the police are the Sandinista government. So all the time when she wanted to tell somebody, the husband say, “You go to tell somebody that I hit you, I go to say you be in here with your children and then the government is coming to kill you and your children.” So my mom she’s scared to tell anybody. She lost four sons and another is being tortured everyday.

She’s crying, she’s screaming every time because she’s out of control because four sons is horrible to die.

So when I see this guy hit my mother every day, my brother in the prison and I grow up in this situation, when I’m 14 years the husband of my mom he tried to abuse me. And I say, “You touch me, I kill you.” I tell him. But I am scared, I don’t want him to kill my mother too.

When I’m 14 years, I’m running from my home because I don’t want my step-father to abuse me and I’m going with the another man, he is the father to my two boys. He’s 28 and I’m 14, only a child. I had my first child when I was 15 years old.

But I had no choice. I had no choice because my stepfather he intends to abuse me and I don’t want him doing something bad. And so I get my first child when I’m 15 and I’m so crying because I’m child too. When I get my first boy when I’m 15 and then I living with this guy until the 20 and I get my second boy, Moses. And I left him when he’s seven months and I bring my first boy when  I decided to come into the United States.

Carmen and her son Benjamin make their way after many months to the US border near Brownsville Texas and manage to cross the Ro Grande to arrive in the US.

We are running through strawberry fields. I put Benjamin on my shoulders. I can hear the dogs and the people shoot the guns to say, “Don’t run in my field,” but I don’t have a choice.  But a nice American man comes and takes us to a shelter, Casa Romero. The nun says it’s full, no more. So I’m very desperate because she say every 15-minute the immigration is coming to take the people. I take my boy and we climb a very big fence to get into the shelter. My boy is still crying and I’m crying too and I say, “Go, I don’t have a choice.”

When the group looks at my boy, he’s climbing the fence, everybody screaming, “No more, it’s packed, please.” And I go in. When I go in, the nun says, “I cannot kick you guys out. It’s my responsibility to help the people.” So I’m so crying because she say stay. I stayed there like two months working there. I clean the place. It’s 800 people refugees in there, 800 people from Nicaragua, Honduras, Guatemala, Salvador.

And the director of the immigration says, “Where are you going?” And I’m saying, “I don’t have family in there. I have only one friend, but I don’t have the money to go to San Francisco.” And he say, “Don’t worry, I buy the ticket.” He’s called to the airport and he buy my ticket and my boy ticket and he’s giving to me $700 and giving to me a letter, a special letter to bring the letter to get food and money and some apartment for me. This director, for me, is my hero because he helped me a lot.

Now this president has closed the door. This is not a human. I’m very scared now. I have a pain in my heart now too because my people want to come here, but it’s impossible. Before yes.

One day when I’m here in the United States with my first boy, everything is coming together and I remember screaming and my boy say, “Mom, what happened?” I remember only I’m crying and crying and crying because everything comes in my mind; my four brother, my mother, when I’m sleeping in the street, when I don’t have food, when I don’t have clothes. I remember when I wake up; I’m in the hospital. I stay in the hospital for one month, St. Mary Hospital, putting me on the medication to sleeping all day.

One day the doctor talk to me and say, “I put in medicine because you are out of control, you screaming a lot and you cry too much.” So one day when I say, “What happened, why I’m here?” And the doctor says, “Because you are out of control. What happened in your life?” And I talked to the doctor in St. Mary Hospital San Francisco and he say, “Oh my God, Carmen, this is horrible pain for you.” And he talked to me; “You need to be strong because your kids need you. If something happened to you, who’ll take care of your child?”

In this moment, I’m crying and say, “That’s true, I’m very strong because I’m survivor to the persecution, the torture, the oppressor and survivor in my country. I need to be a strong woman for my child and that this day I promise to my kid to have a healthy mom.”

I have three children. My first boy, Benjamin works for an international company in Houston. My second son Moses works for Trader Joe’s and my third son Jonathan works for a company that makes surgical instruments. And I have four grandchildren. But now I’m blessed I’m citizen. Thank God I’m citizen.