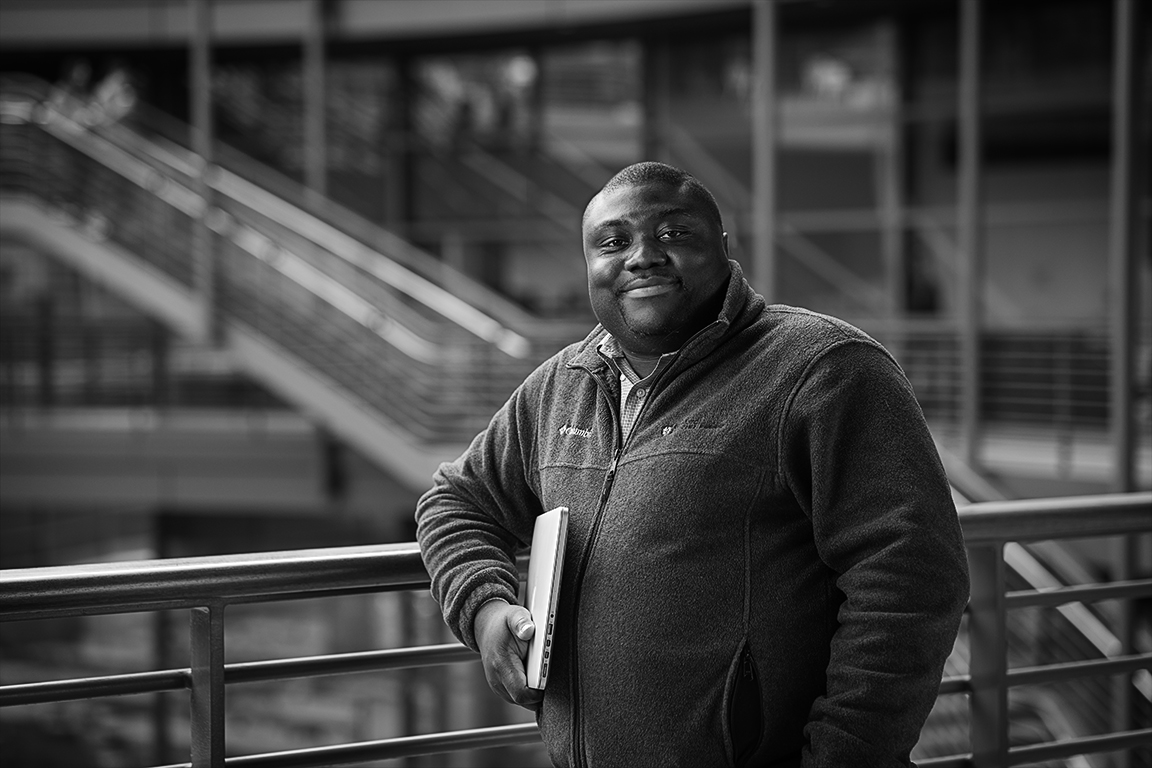 My name is Benedict Anchang. I’m an instructor in the radiology department at Stanford.

Originally, I come from a bilingual Central African country called Cameroon, with a French-speaking majority and an Anglophone minority. I work in the field of Cancer Research, as a computational biologist. I develop computational tools that predict tumor progression for improved personalized medicine. Thus, I’m also a trained statistician.

My journey to Stanford began with an early passion and a precocious ability in mathematics and science. I was only 18 when I lost my mum to recurrent breast cancer and one of her dying wishes was that I “should continue to be passionate about math and science….” However, when I obtained a mathematics degree from the University of Buea, I found career advancement opportunities to be severely limited. Being an Anglophone, a largely marginalized group in Cameroon, put me in further disadvantage. Seeking opportunities abroad was the only viable option, and I moved to Belgium for graduate studies in biostatistics. This further paved the way for me to get into a PhD program in Germany. After my PhD, I was accepted to Stanford for a post-doc position in Dr. Plevritis’s Lab. She’s a professor in radiology and also the chair of the biomedical data science department. I’m currently an instructor in the department and will soon be starting a new research lab as a Principal Investigator at the National Institute of Health (NIH).

Stanford’s pedigree is no secret. But it was only when I moved there that I fully realized the huge opportunity in front of me. Carrying out high quality research around very smart and supportive faculty is transformative. As an immigrant, I was further impressed by my frequent interaction with people from diverse cultural backgrounds as well as institutions and mentors with programs or labs that promote diversity. To put it in simpler terms, I was not only in a top-quality academic environment, I also felt welcome there.

The decision to emigrate to a foreign country is full of uncertainty and tough choices often have to be made, usually with limited resources.  Since I have moved between countries, I’m very aware of the challenges of visas. I always try to make sure I read about the country’s immigration policies before I move to the country. The challenge with the US is that there are tons of different visa options, and an immigrant has to choose the right one. Usually as a foreign student, when you come to a place like Stanford, you are just happy and want to study or work. And later, you discover that the visa that you used for entry determines every other visa after that. That means if you apply for a particular visa that has certain limitations, you are probably stuck. Getting an exchange visitor (J) visa to carry out my post-doc wasn’t so much of an issue for me, mainly because I came to the US from Germany where I was already a legal resident. Had I come from Cameroon directly, it could have been a totally different outcome, such as being subject to the unpopular (at least from an immigrant’s perspective) “two-year home country” rule which forces you to return to your country of origin.

While my experiences in Stanford were great, that was not my sole reason for emigrating to the US. My wife, also an English-speaking Cameroonian by birth, had already moved to the US through the Diversity Lottery program. You could say she was the principal “pull” factor in my decision to leave Germany for the US. I figured that there would be more opportunities in the US for her, and hence our family. I also knew that, since I was already more advanced in my education, it would be easier for me moving to the US, than it would be for her to find her feet in Germany. Without the lottery program, she may never have been able to leave Cameroon in the first place. My colleagues on the other hand have had different experiences with the US immigration system.

I don’t think immigration is only for the benefit of immigrants. I believe it has been helpful for the U.S. The strength of this country is really linked to immigration. Most of the successes we have achieved is because this country has been receptive to people coming from all over the world. I think that it is good to stay on that path.

I speak from an academic perspective. When immigrants study in a foreign country, they also want to get the benefit to stay after their studies and get work experience. That’s not just about getting a visa. It is important for a country to allow immigrants to not only come and study, you have to also provide opportunities for students to stay. I think that if the students see that it is difficult to survive here, it automatically demotivates them to come in the first place.

As somebody who has been in a postdoctoral program and interacted with a lot of other PhD students, I can tell you that most of the students are from immigrant backgrounds. So, if the immigration process is blocked today, it’s probably going to affect the entire academic industry. I believe immigration is an ecosystem. Some people tend to look at it like it’s an independent set of facts and would try to fix it as such, but I think you have to approach it like you would with the whole human body. If you want to make changes, you have to consider the effect on the whole system.

This is a great country; it has gone through up’s and down’s in the past. The current anti-immigration sentiment in large parts of the country is probably inevitable — every country that receives lots of immigrants has to go through this. But when you change a system because of political sentiments, the consequences come later and it’s usually very difficult to know what the long-term effects are. As a scientist, I believe we should always try to fully understand the mechanisms of a system, but I am not sure politics works in the same way. In the long term, I am optimistic that immigration in the US will eventually benefit from better law and policy. But that also depends on the voters. People vote for different individual reasons that should always be respected. Thus, it is the responsibility of pro-immigration politicians to make a stronger case to the voting populace.

This country was built on immigration and I think it is very important not to forget where your ancestors came from. I’m sure that if you just take a look back into your family history, you’ll look at immigration from a different perspective. If you don’t understand where people come from then it’s hard to connect with them. It’s important to get to know the people you are fearful of. Once you understand them, you might look at them differently.