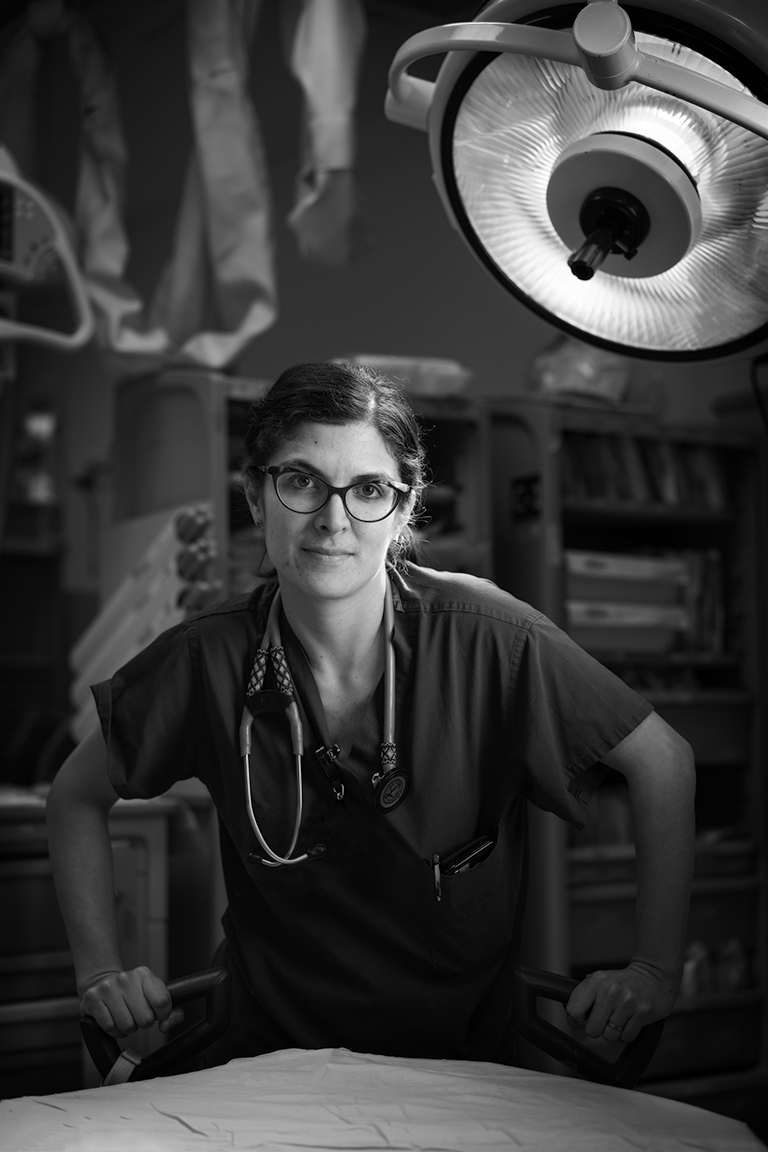 My name is Andrea Rivas Dreyfuss and I‘m an ER doctor at Highland Hospital in Oakland California.

I‘m from Lima, Peru. I’m a first generation immigrant, arrived when I was 20, did undergrad, got married to an American and I stayed ever since.

I came to the States on a scholarship when I was 20 years old to study at the University of Notre Dame in South Bend, Indiana. I had already started college in Peru, on track to enter medicine, but started over again in the United States.   After graduation, I worked for a year as a social worker in the south side of Chicago. And then I got lucky again when I applied to medical school. Stanford Medical School gave me a wonderful offer and five years later I had completed my MD. The extra year was a master’s in public health at Berkeley and also having my son Tiago.

After Stanford I did my emergency medicine residency at Highland Hospital in Oakland. Highland is a very, very special hospital. It’s a public hospital so we are the safety net for people who don’t have insurance. We see, for example, a lot of immigrants who are trying to make a new life here. I think part of the reason I really liked Highland initially and chose it for my residency, over places like Stanford, is that growing up in Peru, my only concept of physicians was like a the general practitioner. You were a jack-of-all-trades. You knew a little bit of everything and that was kind of like my dream of who I wanted to become. Applying to residency, I was really having a hard time deciding between emergency or family medicine.

I was also drawn to Highland because they truly take care of populations that don’t even have access to primary care. This is not to say that we emergency physicians are at all experts in primary care, but for better or worse we end up providing a lot of it. Instead of being pushed to be like, “No, this is not why you come to the emergency department,” we understand that yes, that’s not ideal, but given the situation, we’re going to diagnose hypertension, diabetes, we’re going to make sure that we can plug them into the services they may need. That’s why I went into medicine.

I think Highland prides itself on working all together to make a difference, not only in each patient’s healthcare, but also in social wellbeing. We truly understand that they are intertwined. You can’t have one without the other. We have a lot of phenomenal, not only physicians, but also staff that truly dedicate their life to try to make that difference for our community. That’s why I’m still there.

We are the only trauma center in this area. Oakland, as you probably know, is a fairly violent city. So we see and deal with a lot of that. We don’t just serve the uninsured or victims of violence, we handle all kinds of traumas. Like if you’re a Berkeley student that gets in a car accident you’ll end up with us regardless of your type of insurance.

The new immigration policies have affected our patients. I have patients that clearly are not coming to the hospital at the right time because they’re fearful that they’re going to get deported. And I’ve had, sadly, women that have been sexually assaulted or physically assaulted that are so fearful for their immigration status that they do not want to report anything to the police. I tell them this is the one little change that could give them the pathway to legal status. — It’s just like, “No, I still don’t want to.”

We’ve had patients that have come with really advanced end-stage renal disease — kidney disease — to the point that they needed dialysis. Their electrolytes were so out of whack that they could have cardiac arrest from it at any moment. Part of the reason that they didn’t show up is because they were afraid of their immigration status. We have everywhere in the hospital statements that we’re a safe hospital, but sadly, that’s a little empty promise in the details because — they’re just afraid.

You might have seen this in the news. We had one of our oncology nurses at Highland get deported. She is a nurse at Highland, making a big impact in patients’ lives and being a real member of the community. Her husband was a truck driver. They had three kids who were born in the United States. Both parents got deported. Highland, because of who we are and how we are, we did a protest, wrote a bunch of letters. Now she’s back. We were able to turn it around.

I think it’s really just incredibly sad that we focus on those few immigrants that have broken the law. It’s not based in evidence.  It’s like immigrants are a scapegoat of why the American economy has gone south, I guess, which of course, doesn’t make any sense. But it’s easier to blame somebody. Politicians use  this one concept of American jobs are being taken away, your freedom is at stake, your safety is at stake — fear is a very, very strong tactic and it’s incredibly sad that that’s where we are.

A huge majority of us are just regular people that are trying to do well to the world, take care of our families and also give back to our country in one way or another. I think that’s what the US is made up — it’s all a country of immigrants. My husband, one way or another, was an immigrant just a few generations back. Everybody you meet has had somebody — I think that’s this very special thing about the United States. Peru is very diverse, and I love Peru, but like I’ve never met people from Ethiopia there. Here, I am learning so much about all these different parts of the world, even though I haven’t had the chance to go to those places. And I think this is what makes this country very special and also hard, I guess, in some ways.

I think a lot of what you see in politics right now is like a yelling fight against each other and nobody understands anybody. Like you can’t be far right or far left, it’s like let’s try to communicate. I learned this really well from going to Notre Dame as an undergrad. I was raised Catholic, very Latino-ish Catholic where it’s kind of like more social and that’s pretty much it. I am very much pro-choice, all these things. Notre Dame is a really interesting place because even though you can imagine the university being conservative, they strongly encouraged dialogue which I appreciated, and respect for each other’s point of view. Instead of taking hard lines it was more like, “Let’s talk about it.” It was very encouraged and I think because of that, I formed some long-lasting relationships and watched others as well come together despite starting off very far apart.