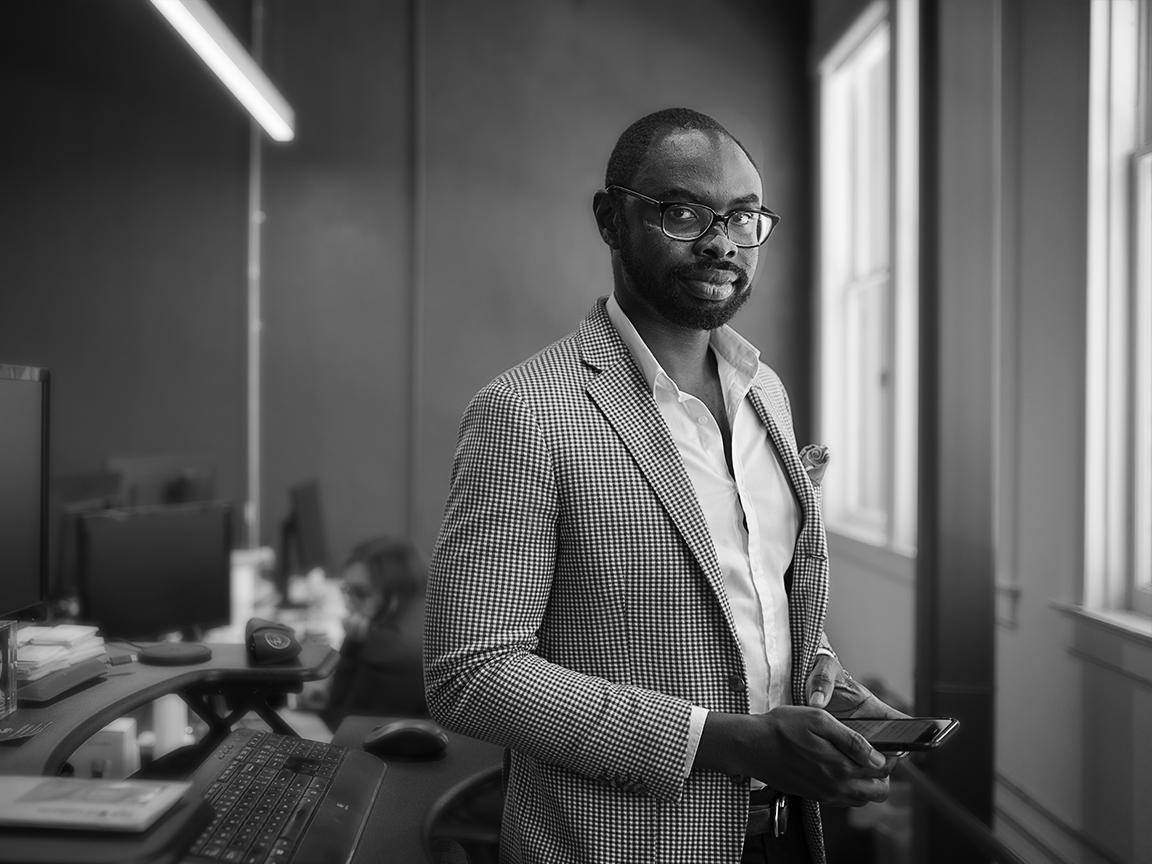 My name is Ade Adesanya.

I came here to go to college. I’ve always been fascinated with America. I think very early on in high school, I learned about Bill Gates and Steve Jobs, and so I got very enamored with the idea of Silicon Valley. I read a lot about them and I hoped that one day I would go to Silicon Valley and do something there.

It didn’t seem like a possibility initially because of my parents and their financial condition. Many immigrants that come to the US are paying cash for college, and you know how expensive college is. It was a dream, but I didn’t know if it was going to happen. Very luckily for me, my dad got a break where he had some business in the US that panned out. That funded the first year of college at the University of Houston.

Also, University of Houston one of the most diverse colleges in the US. I remember being very, very awestruck by the variation of human skin. I had just never seen that much variation of people: whites, blacks, Hispanics, Asian, I was just, “Wow!” I remember my first day getting out of the dorm and just seeing this huge multitude of people, it was a lot to take in.

It was cool. It was intimidating. You’re kind of new to the system where you’re kind of trying to figure it out. There’s a lot of things you’re adjusting to, from the diet to the accent. But the people were very warm and very kind. I got to blend in very well and make international friends. I think that’s the beauty of America, it’s just really being able to get a diverse set of experiences and cultures. And you learn something from that.

When you graduate from college, you have a program called the OPT (Occupational Practical Training) program. The US government will give you one year to get a job. And after that one year lapses, the goal is for you to get a job with a company that would sponsor your work permit, or the H1-B visa.

The challenge though is that a lot of employers don’t want to sponsor H1-B visa because there’s legal costs, there’s all the technicalities, and more importantly, the H1-B visa right now, it’s a lottery process. I could get hired and when I get a job, my job sponsors my application, but it goes into a lottery pool and then they do the lottery. And so there’s no certainty also for the employer in hiring me.

After my undergrad, I had a startup and that failed, so I decided to go back to grad school. One interesting thing about the OPT is that if you have a STEM degree: science, technology, engineering, math; you get two years extra from the one year so you have about three years. So, for me, graduating from grad school at USC actually bought me some time. After grad school, I started Moving Analytics, a telehealth company that helps people thrive after heart disease. I used those three years of OPT to really get the company up and running. And then, I filled for a work permit through Moving Analytics.

I applied for the H1b work permit through Moving Analytics. Each year the US government issues about 65,000 H1b work permits. Last year over 200,000 people applied. To accommodate for the surplus, the government uses a lottery system to choose who gets the permit. We did the application and I got selected in a lottery process, which is the hard part. You then have an immigration officer that reviews your case, and determines if your educational background is related to the job. In my case, my job title said Business Development, because I’m building a company, but my degree was in engineering management. I was developing a business model for this technology to manage heart disease. But because my degree and my job didn’t match, they denied my application. That was a big shock. And by that time, I only had 15 days left on my OPT. My lawyer told me I had 15 days to leave the country.

I was in a board meeting, we had just raised $1.5 million. This was going to be an exciting time, and then I got this call. I had to go back to my board and say, “Hey, you just gave me all this money, but I’m going to have to leave the country.”

I had to actually fire myself from the company because I couldn’t compromise the integrity of the company. If I had stayed, then the company’s hiring an illegal immigrant. So, I went to UCLA and picked up a certificate program there. I was back on a student visa, still kind of doing my job and supporting the company but not getting paid. And now I had legal fees because I was trying to appeal the case. I was trying to get a new green card, look at all my different immigration options, so it was very expensive.

I was a full-time student taking five classes at UCLA because after your fifth class they allow you to do an internship. In January, I had my business partner write me an offer letter. I took it to the professor, and they approved my internship. That’s how I came back to the company. It was pretty much one and a half years of just chaos; in school, trying to run a business, dealing with immigration. It wasn’t a fun time.

With my lawyers, I ended up finding some faster immigration options. The US has what they call a National Interest Waiver for people that want to apply for a green card. For the green card, it takes about two to three years to get a green card. But you can waive two years off that if your work is in the interest of the country. My work is in cardiovascular disease, so I had to get these really big national health care organizations to write me endorsement letters that I was special and my work was important to the country. I was able to apply for that and then I got it. That helped me stay in the US.

But now, I am one of the co-founders of Moving Analytics. We offer a digital cardiac rehab program called Movn that leverages evidence-based medicine, remote monitoring, and telehealth coaching to help patients after heart attack or heart disease to recover. We take patients through a comprehensive plan that helps them with the cardiac risk factors. These are things that make them get a heart attack in the first place like the hypertension, high cholesterol, physical fitness, stress, or smoking.

A lot of patients after a heart attack are referred to cardiac rehab, but there are very few rehab centers, and they are very far away from people’s homes and work. We’re taking that industry online and making it digital. Our goal is to be able to serve way more patients in a more cost-effective way.

With the administration’s immigration policy, I think I would have definitely moved back home and I would have had to leave. Obviously, would have been a big blow to my team and my investors and the mission that we’re trying to solve because I wouldn’t be here.

But even now with my green card, things were moving very fast and then Trump came in. It’s been so slow. Once you apply, if your application has merit, they give you a temporary green card — they call it combo card — for you to work until they figure out your thing. Usually, it takes six months for them figure it out. It’s been a year, I’m still on my temporary green card and haven’t gotten my new green card. That’s because of all the new immigration policies from the administration. Technically, my immigration status is still kind of in a limbo.

Immigrants have built America. Every American is an immigrant, outside of the Native Americans. I think that immigrants fill a very important part of the economy in two places. We do the low-level jobs that many Americans don’t want to do: the gardeners, the house cleaners, all those kinds of things. And we do the very high skilled jobs that most Americans don’t want to do. In graduate school and in undergrad in the engineering program, Americans were minorities. When I went to USC, 80% of the class was Asian; half Chinese, perhaps Indian, and then there was everybody else. When you think about that, it’s like we’re building this country, we’re building infrastructure.

Immigrants have this innate drive to want to be better, to want to change the status quo because they’re coming from a place of limited resources. But when you come to America, it’s like the world is yours if you work hard. I still think that America is still the greatest country on Earth.  I am contributing to the American economy, I’m contributing to the American society. I think that there’s a case to be made for making it easier for us to come here and contribute to the society.