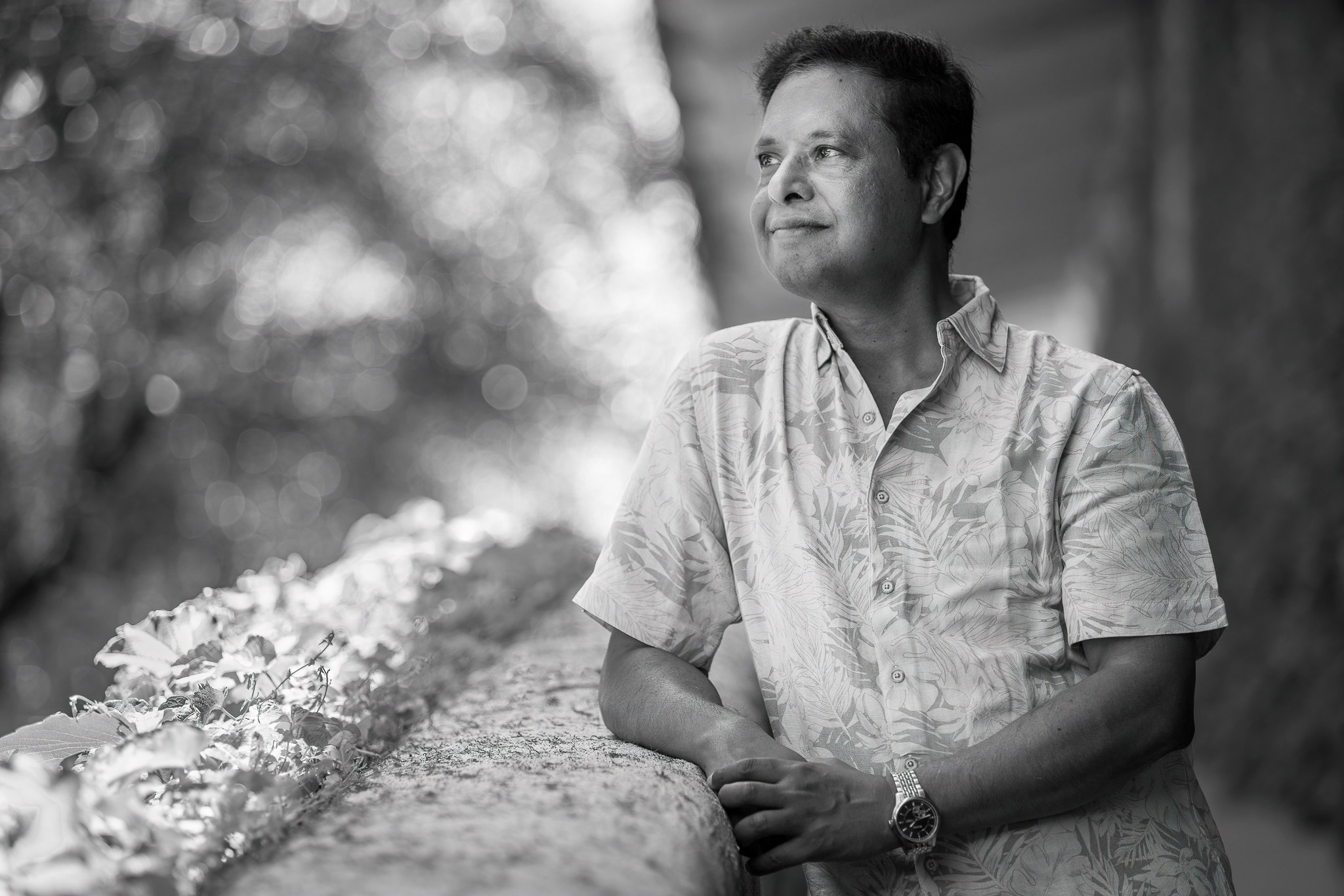 I look at the 58 years of my life through any lens—adventure, professional success, diversity, impact—and I feel grateful. But the truest measure of life, and one that enables other successes and sustains joy, is the amount of love we receive and share. And what an abundance of love I have been blessed with!

Fountains of joys have flowed, unasked, from loving and admiring parents, from my extensive family of first, second and third cousins in India and the U.S., from my caring and inspiring life partner, and from our affectionate children.

Best of all, these gifts of love, including that of my life partner Sunanda, have flowed without effort on my part. I did not know her before marriage. My parents were introduced to her family by the family priest. The families met and decided their eldest children would make a happy couple. I was aboard an oil exploration ship in the Arabian Sea when I received the news of my impending engagement. I was not surprised; I had asked my parents to find me a wife and I’m happy I did.

I could have never found Sunanda on my own. We lived far apart and had little in common. Moreover, I had serious misgivings about love; it conflicted with my dream to live life “lightly on the edges of time, like dew on the tip of a leaf.” She, on the other hand, had unlimited capacity for love. During the first 10 years of our marriage, I moved with my job(s) almost every year. She accompanied with exciting fervor, set down new roots, and quickly grew luxuriant webs of thriving community friendships. My professional journey spanning four continents and a dozen industries would have been impossible without her selfless sacrifice and inspiring companionship. She was the crowning hero of my life’s second chapter, and every chapter since.

My parents were the heroes of the first chapter. Father thrived as a civil engineer, and his joyful presence made him the center of attention at any gathering. He took immense pride in extending liberal support to the extended family, which to him meant all descendants of my great grandfather. Mom, who married at the age of 18 and quickly mothered three children, extended a caring hand with untiring devotion. As a result, our home was rarely without guests; some stayed with us for years, and others for weeks or months. As a child, I never had a lonely moment.

There was nothing remarkable about growing up in Bihar, a poor state of India. My ancestral village did not get a paved road or electricity until well into the 21st century. Fortunately, my grandfather escaped the village to finish high school and diploma. My father was among the first to finish college. I was naturally expected to extend that legacy further, but the line of destiny seemed to crack: I could not speak a word until I was three and a half years old! When I did learn to speak, I was struck with polio.

Though my body healed after a year of ministrations, it stayed frail – bone fractures, malarial fevers, or afflictions like typhoid seemed to be my annual burdens all the way through college. My desire to stay indoors perhaps fueled my love for reading, and for pleasures more attuned to a life of idleness, such as music, yoga, and meditation – which I picked up in college and became lifelong pursuits.

Life took a lucky turn when my mother decided to pursue undergraduate studies. Education was always admired in our family, but I suspect she had another motive. She wanted to send me away from the household clutter to a boarding school. Thus began a mother-son study program. Mom would wake up at four each morning and shake me out of bed. We sat down on a floor carpet and busied ourselves with studies – she did her college work, while I studied prep books for scholarship competitions.

Her efforts were not in vain. At age eleven, I was admitted to a unique government-run boarding school at Netarhat. The school was founded as a dream project of the first Chief Minister of Bihar to prepare citizens for a Gandhian life of simplicity, self-reliance, and service. When I boarded the bus for a day-long journey to Netarhat, I had no idea that I was unwittingly taking my first step to eventually becoming a venture investor in clean energy, food, and water in faraway Boston.

The school, located in the middle of a vast forest, taught me the first lesson on the nexus between energy, food and water. The school did not have a power grid and generated its own electricity from a diesel genset. When the generator shut down, which happened periodically, water could not be pumped up from the lake below and there was no cooking in the kitchen. So – when there was no energy, there was no water and no food.

Two years later, I experienced the horrific dangers of fossil fuel from close quarters at an underground coal mine during a family visit to Dhanbad, the “coal capital” of India. It was the day after Christmas in 1975 when two families with seven children, I being the oldest, took a field trip down 1,000 feet in one of the world’s deepest coal mines called Chasnala. We were the last visitors to come back alive. That night the mine flooded, trapping 372 coal miners in their watery mass grave.

I must have carried deep impressions of these incidents as Life for me followed an arc that gradually moved westward. It would be another 40 years before I and my partners in Boston would start the WAVE Fund to invest in breakthrough innovative solutions to solving the world’s greatest challenges in clean energy, food and water. Getting there took many twists and turns. Fortunately, I trusted my Life – every time I felt its tug, I was willing to let go of my perch and jump into the stream of Life toward another unknowable future.

Next jump occurred after I passed 10th grade. Though I barely spoke English, I followed father’s advice to seek admission at a private English medium school in Delhi. After many frustrating rejections, one school agreed to test me and allowed three weeks’ time to relearn Physics, Chemistry and other subjects in the English language. I luckily made it through. The next two years at the Air Force School readied me for future leaps to the hallowed halls of St. Stephen’s College, the study of Nuclear Physics, the business degree at the University of Chicago, and the venture capital training through Silicon Valley-based Kauffman Fellowship.

The career path was equally meandrous, as if to affirm my belief that an honest, unplanned life can lead to true beauty and fulfillment. Within ten years after graduating from the Delhi University, I had worked in finance and oil industries, commanded hundreds of armed troops to disturbed areas, seen the innards of major factories producing steel and power, and served as the civil police National Coordinator of Elections during the first democratic elections in Mozambique. It is remarkable that my parents, Sunanda, and even my in-laws comforted and cheered me on even as others questioned my sanity in taking crazy risks with life, career, and family.

Twenty-five years ago, we immigrated to the U.S. with no specific career plans. This country has given us a large canvas on which to paint our dreams. People have been so supportive and accepting that our hearts sing for America even as we discover and celebrate aspects of Indian culture that make us stronger. Sunanda, true to her nature, became busy fashioning our new home and community. She started teaching little kids at school, rejuvenated the practice of ancient folk arts of India, volunteered time at regional cultural and historical societies, became a celebrated artist, and founded an inter-cultural platform to celebrate performing arts. I have, after years of effort, succeeded in starting WAVE to find other risk-takers like myself, and to provide them capital and guidance so they can be successful in commercializing their disruptive innovations to mitigate global climate crisis.

What makes America the cultural heartthrob of the world is its immense capacity to give and receive. We have never met an immigrant who wants to be anywhere else. In our experience, Americans are by far the most accepting, open and fair-minded people in the world. Immigrants like us work double-time not only because we have taken great risks to win this opportunity, but also because we are overwhelmed by the generosity and munificence of the adopted land, and want to repay our debt of gratitude.

Two forces shape this world: human love and the creative spirit. America is richly endowed with both, and therefore remains the land of fair and eternal hope. Next time you come across people claiming otherwise, please ask them how many years they have lived in other cultures.