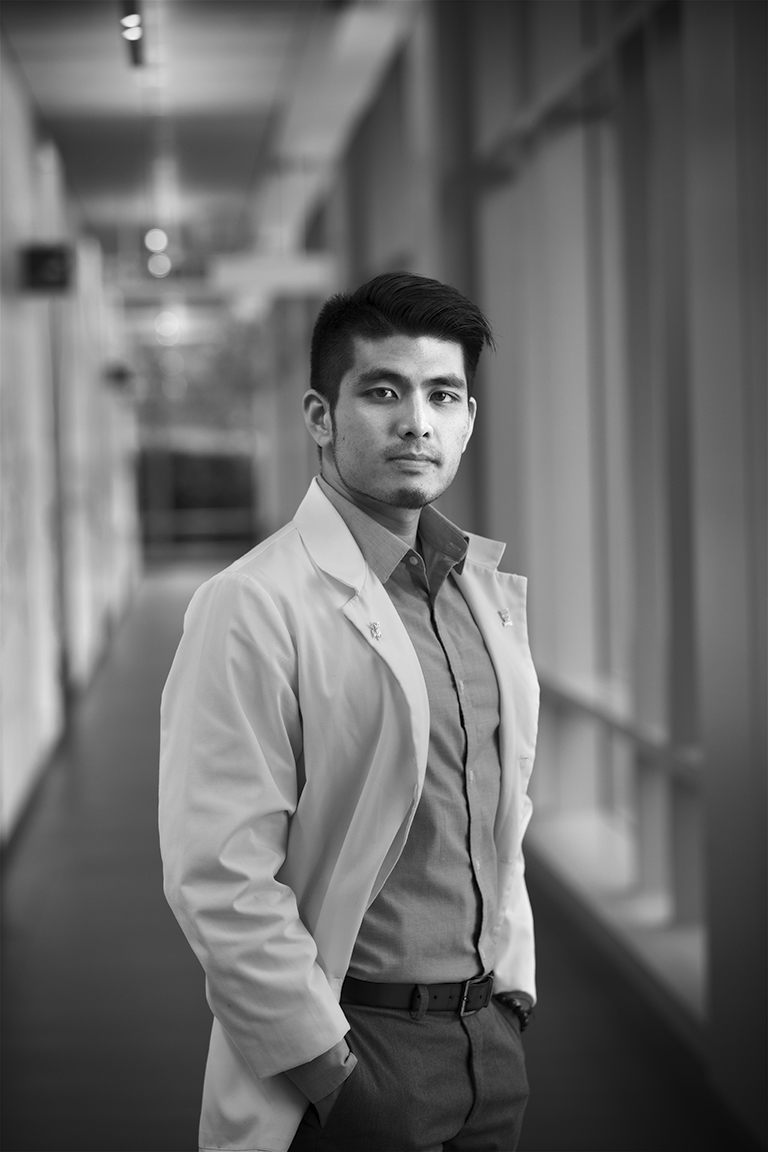 My name is Jirayut Latthivongskorn.  I also go by New. I am one of eleven million undocumented immigrants living here in America, I am one of 800,000 DACA recipients. And I am one of 100 undocumented students in medical school training to become a doctor. Though these numbers are the facts of my life, they obscure the complexity of how I got here and what the future holds for me.

One of the earliest memories I had after moving to America was of a cramped, but cozy living room  of a one-bedroom apartment where the five of us began a new chapter together. “We aren’t going back to Thailand,”my parents told my brother, sister and me. “We’re staying here in America as RobinHoods.” That’s the Thai saying for becoming undocumented; for overstaying our tourist visas, which were set to expire within a few months.

After an economic crash in Southeast Asia, my parents found themselves rebuilding their lives once again. And though we didn’t truly understand what being undocumented meant, we knew that this is what we had to do as a family for a better future. My parents got work at a local Thai restaurants right here in the Bay Area. And they would come home late and I would wait up to see them. And as they entered the apartment, I would run up to them and hug them, put my arms around their waists before they could even take their aprons off. And I would remember the smell of the fish sauce and curry spices and let me tell you, you don’t forget the smell of fish sauce.

And as I looked into their eyes and see their tired expressions after a hard day’s work, I would ask them, “What can I do to help?”

“Focus on your job,” they would say. And my job as a young child was to do well in school. We all looked to education as the key to success. We all looked to education as a way to our American Dream. After witnessing everything that my parents were willing to sacrifice for the opportunities that they never had, I channeled their work ethic into years of diligence. I immersed myself in my studies, I eventually learned and mastered the English language, excelled in AP classes, and graduated as high school salutatorian, all the while working 30 hours a week at our family’s Thai restaurant.

I applied to five UCs for college. I was accepted to all of them. UC Davis, in particular, offered me a Regent scholarship, which was a full tuition scholarship offered to an exceptional few. I was relieved. All of those days spent writing world history papers in the back room and then running to the front when the restaurant was busy were worth it. I could go to college and afford it because otherwise, I was ineligible for any financial aid as an undocumented student.

Three months before the start of college, I was called into the financial aid office. They wanted to see proof of my citizenship and legal immigration status. When I told them that I did not have a green card and I didn’t have a social security number, the officer looked at me and said, “Let us know when your status changes.” And just like that, the scholarship offer was withdrawn. The formula for the American dream had failed me. I listened to my parents, I did my job,I earned this scholarship opportunity and yet I came to find that the American dream for me was a false promise.

It was the first time that I came face to face with an institutional barrier created by my immigration status that I couldn’t face alone. Thankfully, I have my family and they helped support me through the first year of college while I bussed tables and hunted for private scholarships.

But growing up, I  was isolated and afraid of the constant threat of deportation if anyone learned that I was undocumented, same for my family. I remember holding my breath every time a police car drove by or I heard a siren. In the second year of my college, I met other undocumented folks, other undocumented immigrants for the first time and it changed my life. On a bright sunny day on a rooftop deck overlooking Lake Merritt, my family and I arrived to a scholarship ceremony. We looked around and we saw other families there and we leaned to each other and whispered, “Are all these other people undocumented too?”

Later in that afternoon, the reception would celebrate young scholars and I saw for the first time that being undocumented could be filled with so much joy, so much support, rather than shame and stigma. The positive energy that day was unlike anything I had ever before associated with being undocumented. That was in 2010 and that year was important because I would continue to go on this journey of redefining what it would mean to be an undocumented immigrant.

I enrolled in Professor Tyrone Hayes’ Intro to Endocrinology class at UC Berkeley. It was during that class that students protested the tuition hikes that were happening that year by having a UC walk out day. While I was in solidarity with these protestors, I didn’t come to America to miss class, and so I went to class. But what Professor Hayes did next would stay with me forever. Instead of lecturing, he shared with us his story of being one of the few African American students in Ivy League institution. He shared with us the importance of carving your own path when you are first so that others could be there too. He put up Einstein’s words “those who have the privilege to know have the duty to act” and it was all a moment of clarity for me.

For years, I have been watching undocumented youth speak up publicly while people like my parents were working day in and day out. How could I sit here in this lecture hall and do nothing? No, it was my duty to speak up about being undocumented to influence the very policies that affected my communities.

And so I became deeply involved in immigrant rights activism. I wrote about my immigration story. I testified at the State Capitol in support of in-state financial aid here in California and to limit ICE and police collaboration. And I learned through all of that that if we come together as a community, even as undocumented immigrants, we could reclaim our agency.

In 2012, two years later, I graduated with honors from Berkeley in molecular and cell biology. By this point, I knew that I wanted to become a doctor. From personal experiences of having very little or no access to health care, I wanted to become a physician who would change policies and influence the status quo of how healthcare was delivered and thereby, impacting uninsured, low-income, homeless immigrant communities, the very same that I was a part of and have worked with. Yet there were so many unanswered questions; is it even possible for me to go to med school? How would I do it?

I always used to joke that undocumented medical students were like unicorns because we would ask around and somebody would say that I’d heard of someone that had known of somebody that went to med school, but no one could actually ever find the person and I just thought they simply didn’t exist. That was when I co-founded Pre-health Dreamers, an organization with a mission of supporting undocumented immigrant students in their health and science careers.

And what began as a quest to find a unicorn became a community around the nation that engaged in peer advising, in resource sharing and in advocacy. We pictured to ourselves and asked: what if undocumented students could be considered equally in their admissions to graduate and professional schools? What if institutions would recognize that our lived experiences leave us well equipped to provide exceptional healthcare and change the systems that have kept us out? What if we could recreate that positive energy that I had felt on that rooftop that day at that ceremony?

And the more we believed it, the more schools we applied to, the more hearts we engaged, the more champions we found and the more policies we changed. And six years later, I am now one of 100 undocumented medical students around the country. I’m in my last year of medical school. I plan to enter and hopefully complete residency training in family medicine—serving the full spectrum of patients. But a huge part of that hinges on DACA because it would be near impossible to get employment — this residency training — without it.

When I first got into UCSF, I made sure to share my story far and wide because I wanted every single undocumented student to know that it was possible and that they are not alone. I am one of eleven million. I am one of 800,000. I’m one of 100.

The fear of deportation or ICE showing up, it’s always a legitimate risk for undocumented immigrants. I’m privileged to be where I am today, where it’s not something I have to think about every day. That’s simply because I am connected to resources and to a community of other undocumented folks for the past almost ten years. Those are the kinds of things that have gotten me to be comfortable speaking out about it, even though there’s always some level of risk. I have DACA so that theoretically protects me, but even still that worry never completely goes away.

Something I do think about a lot is my family members. I always think before I engage in anything, whether it’s a public speaking engagement or an advocacy project that’s very visible. Who else am I bringing into this? It’s not just my own situation: it’s my sister, my parents. But we must remember that crises are also opportunities. We could give up, turn the other way, or we could use our agency for change. Immigration is one of the most talked about and least understood topics in American politics. So, we need to continue to ground ourselves in experiences, stories, narratives because that’s how you change hearts and minds.

Being in medical school and having had these academic opportunities are part of my story, and I am proud to be able to be where I am. But, I try to very much contextualize that with everything else. To some who hears my story and say you’re the exception – you go to UCSF Med School, you’re going to Harvard. You and a few hundred thousand kids are the good immigrants. We can keep you, but not the other millions who are not “Dreamers”. It is my responsibility and duty to know that, if I’m going to share my story and speak up about immigration, I can’t ignore that association that happens.

To those who may not have known another undocumented person, I share a lot of my personal life journey. I tell them that I grew up here in California, grew up in high school and did all these things they did, their kids and grandkids also did. Like wanting to drive when I was 16, trying to get summer jobs as a high schooler, and applying to college. All these rites of passage that a lot of people associate with growing up here and being American show people that there is common ground when we’re talking about me and undocumented immigrants. I try to establish that our experiences can be very similar.